The spacecraft, Chandrayaan-1, carried a verse from the Rig Veda: you enlighten us through the right path.

Old clocks show the phases of the moon as well as the time because before electricity, people relied on moonlight to travel in the evening. People who don’t keep track of the moon’s influence on tides can get into trouble, as Julius Caesar did when Roman ignorance of English tides left boats high and dry in the Roman invasion of Britain.

With examples from classical texts and science fiction, Brunner describes not just the history of the celestial body but the ways it inspired the human imagina- tion to take flight. Most faiths and cultures kept an eye on the moon: Easter, Ramadan, Tet and other observances were determined according to the lunar calendar. 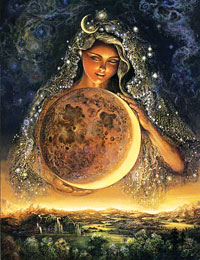 The Buddha was supposed to have achieved enlightenment by the light of the full moon, and as belief in a moon goddess faded in Europe with the advent of Christianity, Mary became associated with the moon.

Maps of the moon began appearing as soon as telescopes became available, with the most famous early incident being Galileo’s discovery that the moon was not a perfect crystal but had mountains and valleys. This contributed to the crumbling of old Greek notions of the perfection of heavens and, ultimately, to acceptance of the idea that the earth revolves around the sun.

From scientific discussions of the moon’s effects on mating and feeding habits of animals to an illuminating interpretation of Bishop Francis Godwin’s 1638 novel The Man in the Moone, Brunner’s explorations recast a familiar object in an entirely original and unforgettable light and will change the way we view the night sky. By the 17th century, Europeans were imagining trips to the moon and encounters with lunar inhabitants who “were hardly ever imagined as inferior, ill-natured or threatening”.

Perhaps the most famous work in the genre is Jules Verne’s From the Earth to the Moon (1865), which accurately predicted that people from the US would be the first to set foot on the Moon.

Brunner brings out the romance in a cold, rocky, lifeless little satellite.