Book>> Cyburbia, The Dangerous Idea That's Changing How We Live And Who We Are by James Harkin Hatchette India Rs 495

Book>> Cyburbia, The Dangerous Idea That's Changing How We Live And Who We Are by James Harkin Hatchette India Rs 495

In 2006, Abdur Chowdhury, a software engineer with aol, had a brainwave. Given how millions of people were typing their thoughts into aol's search engine, he thought of posting that information public. Chowdhury had worked as an academic. He knew for the big companies who can afford to buy it, online data about human behaviour was difficult to come by. His plan was to gift researchers a set of tools to understand preoccupations of Internet users. He had planned safeguards.

But they weren't foolproof. The website went live in August 2006. To the hordes of geeks and hackers, Christmas had come early. Within hours, they had pilfered the information and put them over the more obscure corners of the Internet.Chowdhury was given the marching orders.

James Harkins' new book Cyburbia: The Dangerous Idea That's Changing How We Live And Who We Are is at its best in excavating such scary stories. Harkins suggests our ability to understand the effects of the Internet is being eclipsed by our participation in the cyberworld--or cyburbia.

Harkin makes a convincing case that cybernetics--the study of how systems (mechanical or organic) arrange flows of information--is the master discipline of the Internet. He asks us to keep in mind cybernetics' founding moments: during the World War II when a Harvard mathematician Norbert Wiener tried to improve the performance of British anti-aircraft gunners. Wiener, the son of a Jewish teacher, was shocked by the Nazi air attacks on London, and sought a better communications system to allow soldiers on the ground to track down the Luftwaffe. 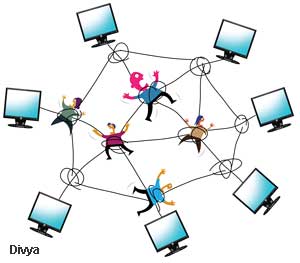 Subsequently the celebrity sociologist Marshall McLuhan extended Wiener's ideas to social and metaphysical realms, and began to envision networks in which everyone was connected.

Harkins contests the idea of such utopia. He suggests that cybernetics helped construct the Al-Qaida Network--most times a faceless body. He sees Facebook users as signalling to each other by flashing lamps. The only winner is the disembodied system, which passes information, using us as its automata.

But then he stretches himself. Harkins dismisses the creativity in music, video or photography enabled by Internet distribution channels. He also has very little idea of the buzzphrase "peer-to-peer". It actually means "file-sharing" programmes such as BitTorrent, which allow users to connect direc-tly to one another--so that illegally copied content, such as music or film, do not need to be stored on a central server. But Harkin also defines Google, YouTube and Facebook as "peer to peer", which technically they aren't.

Ananth Nayak works for a e-solutions firm in Hyderabad