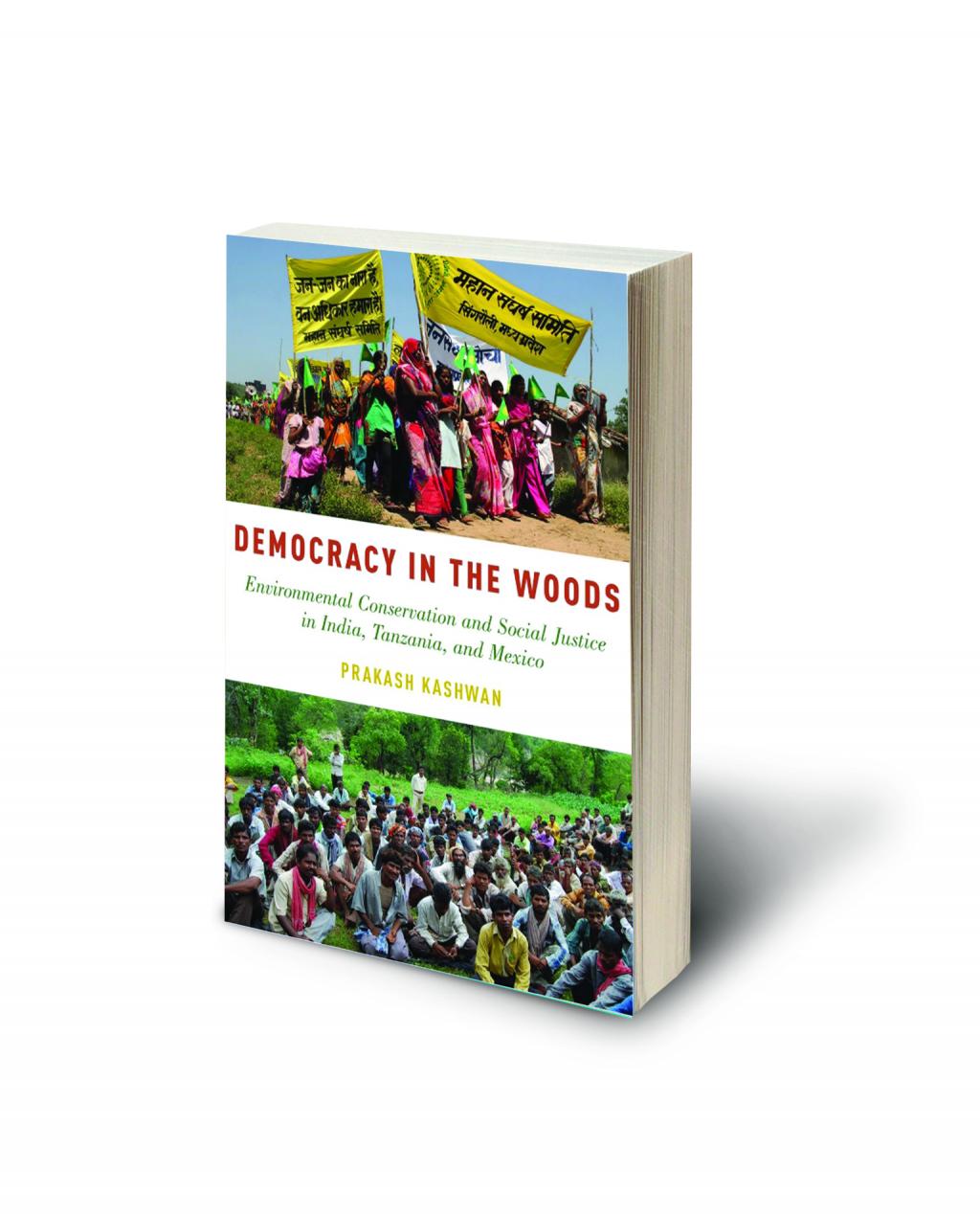 What are the political drivers for land rights of forest-dependent communities?

Prakash Kashwan is an Associate Professor in the Department of Political Science, University of Connecticut. His research and scholarship focuses on political economy of institutions, environmental policy and politics, global climate governance, and climate justice. In his book Democracy in the Woods: Environmental Conservation and Social Justice in India, Tanzania, and Mexico, Kashwan offers political-economic explanations for the remarkable differences in the negotiation of peasant land rights in forested regions of the three countries. Below is an excerpt from the book

Social justice and environmental conservation, two of the most important issues of this day and age, are at odds in many of the world’s forested regions. In 2002 and 2003, India’s forestry agencies ran a nationwide “eviction campaign” that “cleared” 152,400 hectares of farmlands within the lands designated as state forests. These evictions displaced 150,000 peasant families, with Amnesty International reporting widespread human rights violations. In Tanzania, more recently, armed rangers from Serengeti National Park burned 114 Maasai settlements to the ground in February 2015, with the rangers arguing that the settlements were located within the park’s boundaries.

While the government agencies justified their actions for the sake of advancing conservation goals, local residents in the forested regions of India and Tanzania — whose livelihoods depend on peasant farming, pastoralism, and the use of forest produce for subsistence — argue they have lived in these areas for generations. As serious as these incidents are, they are unfortunately not exceptions. The forested regions that international conservation groups have designated as biodiversity hotspots are also social and political flashpoints, with insecure land tenure, high levels of poverty, enduring power asymmetries, and histories of state control and repression. Worldwide, an estimated 750 million indigenous and other forest-dependent peasants claim customary and de facto land rights, which national forestry and wildlife agencies do not accept as legitimate. These land rights conflicts often lead to violence: Global Witness reported that 908 people in 35 countries died between 2002 and 2012 because of their work on “environment and land issues.”

Clearly, these numbers represent only a tiny fraction of fatalities linked to forestland conflicts, which occur on a routine basis in major forested countries. Additionally, land-related conflicts often have exacerbated civil conflicts in a number of countries, including the Naxalite insurgency in India, the Zapatista rebellion in Mexico, and the Rwandan genocide, among others. These conflicts have intensified as national forestry agencies and international conservation groups have worked to set aside large areas of land exclusively for the provision of environmental goods and services — such as wildlife and biodiversity conservation, biofuels, and forest-based carbon emission reductions.

International support for forest and wildlife conservation programs fuel most of the demand for these new enclosures. The frequency and scope of these land rights conflicts, rooted in state-led defense of forests, call into question the cliché that pits long-term policy goals (such as nature conservation) against short-term electoral considerations.

If incumbent governments were driven exclusively by electoral calculus, elected leaders in India and Tanzania would have sought to prevent the bloody conflicts mentioned above in order to avoid the wrath of voters. Instead, these governments proceeded to violently enforce the colonial-era forest boundaries, which government agencies defended as being necessary for forest protection and wildlife conservation.

Nationwide mobilization following these incidents forced the Indian government to enact the Forest Rights Act (FRA) of 2006 to address land rights conflicts, even though the act remains poorly implemented. Across the Indian Ocean, as Tanzania’s ruling party faced its toughest-ever electoral competition from a united opposition in the 2015 presidential election, its candidate promised to redistribute land and end land conflicts. Since the election, however, the new government has sent mixed signals.

While the Land Ministry promised to resolve land conflicts, the Ministry of Tourism and Natural Resources politely refused to be drawn into an ongoing legal battle between the Maasais and a US-based safari company. Why do elected governments and political leaders often respond to the tensions between competing local and global demands regarding forestlands in a manner that contradicts expectations associated with populist politics? And what impacts do their decisions have on social justice and environmental conservation?

This book’s comparative analysis of peasant land rights in the forested regions in India, Tanzania, and Mexico shows that political and economic factors are central to explaining the diverging paths of forestland rights and nature conservation regimes. The analytical logic for the choice of case study countries is explained at length in section 1.3, but one important motivation is related to a puzzling divergence over time in the nature of forestland regimes in these three countries.

While Mexico’s agrarian revolution of 1910–1917 lent strength to peasants’ demands for land redistribution, the revolution did not predetermine the outcomes of forestland regimes in the decades to come, as Chapter 3 demonstrates. Democracy in the Woods offers political-economic explanations for the remarkable differences in the negotiation of peasant land rights in forested regions of the three case study countries.

First and foremost, it shows that political structures that enable sustained engagement between peasant groups and ruling political parties lead to governments providing statutory protection to peasant land rights in forested regions. Drawing on research from the fields of historical institutionalism, development studies, and comparative politics, I theorize the conditions under which progressive policy reforms are likely to be enacted and effectively implemented.

Indeed, the nature and extent of engagements between actors in social and political arenas is a product of the political and economic contexts within which forested territories are embedded. This leads to the second main argument of the book, which connects the history of state-led development in the case study countries to the status of forest and land rights within their national forestland regimes.

By “forestland regimes,” I mean the configuration of actors, authorities, and institutions that regulate forest and land use, as well as “the formal and informal structure and nature of political power” in forested regions. Contrary to the conventional understanding of conflict between environment and development, this book shows that environmental considerations and economic development may also reinforce one another. Moreover, it shows that the implications of this interaction between economic development and environmental protection for social justice hinge on the nature of political process that mediates these divergent, though not necessarily contradictory, goals.

In the postcolonial era, the imperatives of national development motivated national leaders to centralize control over hinterlands in most countries of Africa and Asia. Over time, national governments designated much of this centrally controlled land as forests and wildlife reserves to secure support from international conservation groups and multilateral agencies. Many postcolonial governments deployed internationally supported nature conservation programs as “development” projects, which brought new opportunities and resources to remote forested regions.

While these new resources occasionally benefited forest-dependent people, in most cases, they did more to reinforce the authority, powers, and resources at the disposal of national forestry and wildlife agencies. Finally, I examine the outcomes of recent efforts to bring about institutional change in forestland regimes in Mexico, Tanzania, and India — efforts that underscore the importance of interactions between national politics and subnational political-economic relations. At the national level, each of these countries has introduced reforms designed to formalize peasant land rights, and national forestry agencies have offered forest-based carbon emission reduction proposals as part of international negotiations related to climate change mitigation.

These national and sub-national processes present yet another set of opportunities to test the arguments set forth in this chapter which I do in Chapters 5–7. This book’s emphasis on the political drivers of land rights of forest-dependent peasants draws attention to the highly consequential intersections of social justice and environmental conservation. The timeliness of such an approach is evident in light of the United Nations’ recently adopted 2030 Sustainable Development Goals, which include a pledge to protect the rights of all men and women, in particular the poor and the vulnerable, to have “ownership and control over land and other forms of property, inheritance, natural resources.” Instead of exploring land rights in isolation, this book situates them within an analysis of the emergence of national forestland regimes and forest policy reforms, which are often at the center of sustainable development campaigns.