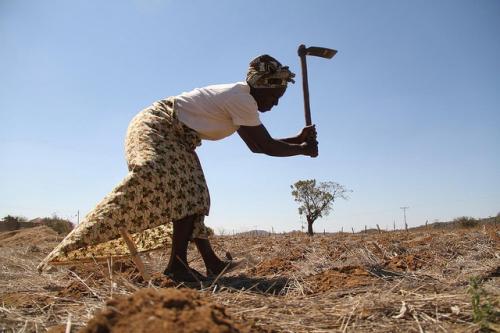 Widow and retired school teacher Margaret Chisangano moved to a village in 1990, with limited resources. She acquired about five hectares (ha) of communal land where she built a small temporary hut and started rearing goats. She also started to grow maize initially on one ha, but her yield was low due to soil infertility and erratic rainfall.

Chisangano also faced the problem of inadequate labour besides less rainfall. She could barely harvest one tonne of corn, even with good showers. The soil fertility problem got worse each year and the land became drier, culminating in an annual yield decline. However, things changed when she adopted diversified, integrated production system, in particular, conservation agriculture (CA) and integrated crop-livestock system.

With a willingness to learn things, Chisangano embraced the practice of CA. The practice enhances soil health, improves productive capacity and conserves water. As a lead farmer, she received training and support from the Food and Agriculture Organization and its partners in Zambia.

In Chongwe district, there are 1,151 lead farmers, who mentor 15,123 follower farmers. A lead farmer’s farm serves as a demonstration farm for follower farmers to learn. Chisangano prepared her land in the dry season when labour is normally available. Using the chaka hoe, she prepared her basins at 90x70 cm, added recommended mineral fertilizers to the basins and incorporated farm residues, mainly maize stovers, into the soil. She weeded the farm manually, until she was able to afford herbicides.

According to Oliver Bulaya, a development worker supporting farmers, the land in Chongwe is degraded. “The introduction of CA is transforming farming in the area. Unpredictable changes in climatic conditions, especially prolonged droughts, are becoming a major problem. With CA, farmers have learned to prepare their lands. Cultivation is restricted to creating basins or rip lines for establishment of planting stations or lines. In this way, farmers minimise soil disturbance and land degradation and increase water infiltration and soil retention. The results are that production has increased, and farmers are making good profits. Some have been able to buy animals and build houses,” he says.

To improve her soil, Chisangano started using animal manure, along with mineral fertilizers on her maize field. She started harvesting three to four tonnes of maize per hectare every year. Hand weeding is the best, but labour is a challenge. Recently, the farmer was able to hire a tractor to plough additional one ha, while the rest of the field is manually managed.

CA is best when combined with other good agricultural practices—such as crops, soil, nutrients, water and pest management to improve the efficiency of resource use in production systems. With improved production, Chisangano has started to gradually diversify her farm enterprise by integrating other crops, especially legumes. In Zambia, the area under CA is notably more diverse, as farmers have more time and resources to grow other crops, (potato, beans) because land preparation starts early.

Chisangano’s improved maize yields have allowed her to invest in goat farming. She now has 21 goats. She has also invested in piggery, bought six cows as well as chickens. With four hired workers, she has been able to return most of the animal manures and maize residues back to the field and incorporate them in basins. She sells her extra crops and feeds about a quarter of the stover and part of the crop, to her livestock. As a lead farmer, she mentors 10 other follower farmers, who are learning. Having formed a cooperative, along with other farmers in Chongwe, she has a direct link to markets.

With the money Chisangano is making, she has been able to provide for her family. In 2015, she built a five-room house with modern facilities. The key to Margaret’s success can be attributed to her effective use of CA, production diversification using crops-livestock integration and linkage to market. Integrating legumes, in sequence or in rotation basis, and use of cash crops are important diversification options. An integrated approach is needed to transform agricultural systems in order to effectively ensure food security in a changing climate.