The world urgently needs a comprehensive approach that considers responsibility, capability and development indicators towards dividing the carbon budget

There are plenty of figures that come under the broad heading of carbon budget. These figures encompass the odds of our planet preventing a 2°C global warming or overshooting that figure. The Intergovernmental Panel for Climate Change (IPCC) has provided a comprehensive table of figures relating to the remaining carbon budget.

As these concepts and figures increasingly permeate cultural and political identities and begin to take the form of action, we must keep in mind that we are depleting our carbon space every day.

Carbon space isn’t a new concept nor is it a subject we are unfamiliar with. It has been central to IPCC and United Nations Framework Convention on Climate Change (UNFCCC) discourse for the past two decades. But we always come unstuck at the crucial stage. How do we divide this carbon space amongst countries in a way that is globally agreeable?  Who gets a larger share and who doesn’t?

Carbon space is in essence a budget, much like the annual financial budget, but dividing this bears local, regional and global implications.

Challenges of dividing the carbon budget

These shares have to accommodate all the overarching principles of UNFCCC—equity, ambitiousness and CBDR (common but differentiated responsibilities)—whilst taking into account the socio-cultural, economic and political imbalances around the world.

All of these approaches, to their credit, base at least part of their method on the UNFCCC principles that all countries have signed. In some cases, they result in a quantitative conclusion and present an approximation of the carbon budget division. But many of them lack depth and are not comprehensive enough to account for the immense socio-cultural, political and economic diversity our planet possesses.

Historical responsibility is included in most indicators developed so far in the form of CO2 emissions. However, some indicators incorporate this as per capita figures whereas others as a country’s total figure. This difference is quite significant and it can impact the analysis of a country’s CO2 emissions.

Similarly, other factors such as capability to mitigate also face such issues, which may cause a certain bias and may not reflect the true nature of action towards climate change. Most indicators have tended to use GDP per capita or GDP total as the primary source for indicating a country’s capability to combat climate change. While this is a good measure, finance is not the only weapon against climate change.

A per capita approach favours some countries whereas a total country figure favours others. Such imbalances are common for most of the sub-indicators and reflect the scale of disparity on our planet. Political transparency and stability, socio-cultural awareness and human development are some other major factors that can either be a boon or bane against climate change. In fact, it is precisely some of these issues that have caused many countries to disagree on major climate change policies. As a result, countries differ from each other in their progress towards mitigation and adaptation in relation to climate change.

Unfortunately, such factors are not easily transformable into indicators and data gathering for such sensitive factors is another major stumbling block. A country’s education rate, life expectancy, malnutrition rates, poverty levels and other such data factors are equally important while calculating how much of the remaining carbon budget a country should be allotted. This depth of understanding and global inequality is often overlooked when simple income and GDP figures are used.

Thus, such issues which are harder to quantify and measure but are more than important in the context of climate change and sustainable development need addressing at every institutional level to ensure we come up with a globally acceptable index which can allocate carbon shares.

A comprehensive approach that considers responsibility, capability and development indicators

As an intern with the Climate Change Programme at the Centre for Science and Environment in New Delhi, I had the opportunity to explore these issues in greater detail and work towards formulating a climate change index that can divide the carbon budget.

We created an index—RCD (Responsibility, Capability and Development Level) Index—that was an amalgamation of already existing indices and raw data such as population share, GNI per capita and CO2 emission per capita. These were combined with indices such as readiness and vulnerability indices.

The readiness and vulnerability indices (formulated by the Notre Dame Institute) aim to simply and quantitatively portray a country’s political transparency, development level, socio-cultural environment and business environment, among other factors. These combinations were then categorised into the broad sections of responsibility, capability and development level, which are at the core of UNFCCC principles under equity.

The RCD method does have a few shortcomings which mostly lie in its mathematical foundations, but its strength lies in its attention to detail and its basis on UNFCCC principles. It also ranks countries individually on a scale of zero to one, with one indicating greater action, responsibility and capability towards climate change for each country. 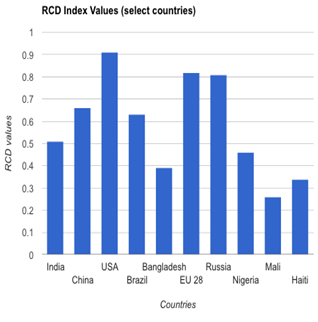 Thus, a comparative and quantitative analysis can be garnered from the RCD Index. With further research and development of the index, the results will be all the more convincing and conclusive.

The chart (see ‘RCD Index Values’) provides index values for a select group of countries. It’s important to note that each country is ranked on a scale of zero to one with respect to that particular country only.

Additionally, the RCD Index leans towards a per capita approach to responsibility and capability. Therefore, the RCD Index values are not a share of the global total. The overall RCD Index was then combined with population data (to account for population variations in the carbon budget allocation) and was then converted into a linear formula, which can be used to divide the carbon budget. While the RCD Index is not finalised or peer-reviewed and needs to be further developed to make it more robust, it represents an important step towards quantification and holistic analysis of our carbon space.

Each of the indices examined and analysed differ from each other significantly either in their mathematical formulations, choice of data or focus on certain UNFCCC principles, with each having its own strengths and weaknesses. Thus, choosing the “right” index is politically very challenging with multiple perspectives from different countries based on its interests. The process of creating an index did, however, highlight the vast complexities and global situations that impact progress towards climate change.

With the approaching climate change negotiations in Paris, a cumulative assessment of the global effort to keep global warming under 2°C is essential. Early indications are that the current levels of ambition and targets mentioned in the INDCs will be insufficient to achieve this goal. Under these circumstances, it will be imperative that a globally agreeable index and methodology for carbon budget sharing is formed.

Meeting of all parties at the UNFCCC conferences can then put pressure on countries showing low levels of ambition (particularly developed countries) to ratchet up their mitigation targets and allocate appropriate carbon budget for developing countries to achieve their basic development targets. But this needs to be done fast. We are, as we speak, running out of both space and time.