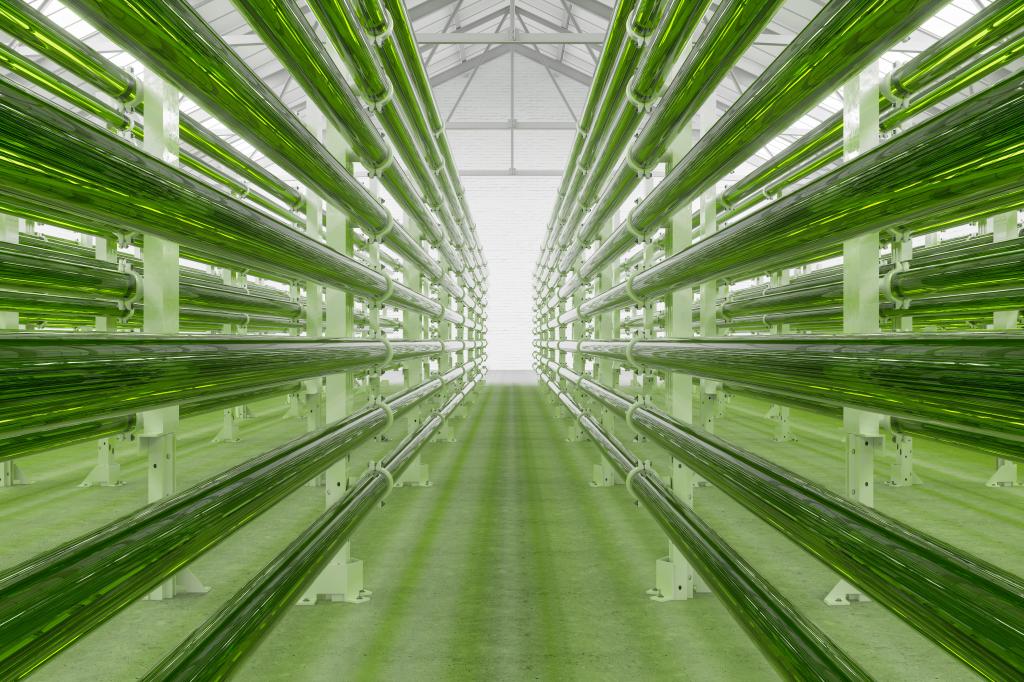 Algae came to the limelight in the world’s fight against climate change about a decade ago for its vast benefits in industrial production. It can synthesise large volumes of oil (20 times more than that of mustard per acre), grow fast (10 times quicker than terrestrial plants) and capture carbon dioxide (CO2).

Since then, big industries and startups around the globe have been working to commercialise algae-based biofuel processes to reduce dependence on conventional fossil fuels like petrol and diesel.

But, as of today in 2022, have we really come up with any algae biofuel industry?

India’s Reliance Industries Ltd recently released a short video on social media platform Instagram highlighting the cutting-edge algae-to-fuel technology it has developed. The company has been successfully running large algae raceway ponds the last five years at their facility near Jamnagar, to convert sunshine, CO2 and seawater into bio-oil.

It also displayed the utilisation of catalytic hydrothermal liquefaction technology to convert algae biomass to oil. Under this process, water is used as solvent under high temperature and pressure to extract oil from the biomass.

The benefits of this technology include direct utilisation of wet biomass without any need for drying and conversion of every organic fragment of biomass into oil and without any wastage.

“Microalgae are excellent at converting CO2 and sunlight into oil-rich biomass, especially when compared to land-based crop plants like oil palm and soy,” the company wrote on its website, adding:

By adapting microalgae to function as cell factories producing energy-dense oils that can easily be refined into renewable diesel and jet fuel, we can reduce greenhouse gas emissions by 70 per cent.

A pilot run over five hectares will be performed at Borneo Island of Malaysia starting 2023, with monetary support from Japan’s New Energy and Industrial Technology Development Organization.

In 2021, TotalEnergies, a global energy company, tied up with French company Veolia to demonstrate an algal biofuel production facility at TotalEnergies’s La Mède biorefinery near Marseille, France. The project aims to harness the potential of CO2-absorbing microalgae and transform it into oil by 2025.

Earlier in 2022, Turkish airlines partnered with Bogazici University to build an algae-based jet fuel demonstration plant at Istanbul. The company received 6 million euros in funding from the European Union.

These, however, are not the first initiatives to prove the value of algae biofuel. Reports on “algae oil bubble” point to a disappointing reality.

Over 25 companies worldwide who initially pitched in to make algae biofuels  have either gone bankrupt or moved to other algae products.

Algenol, one of the first algae-based biofuel companies that was pumped in trillions of dollars from public-private funds and promised to deliver 8,000 gallons of algal fuel per acre per year, had to completely shut down its biofuel business in 2015.

Shell and Chevron, the leading multinational energy industries, halted their algal biofuel R&D programs long back, declaring it a failure.

The major challenges associated with algae biofuel include large water requirements, high cost of growth nutrients, expensive biomass harvesting, and difficult oil extraction from algae cells. Producing a kilogram of biodiesel requires 3.73 tonnes of water, 0.33 kg of nitrogen and 0.71 kg of phosphate, according to estimates.

Moreover, to replace just 5 per cent of the diesel that the United States consumes, algal biofuels will require a minimum of 123 billion litres of freshwater, which is equivalent to fulfilling the demand of 400,000 households for a year.

Techno-economic studies on algae fuels demonstrate that the cost has a large variability because of inappropriate assumptions, including those related to the products, cultivation methods, biomass productivities, oil contents, production capacity and conversion technologies.

The results of the cost estimation were directly impacted by an overestimation of the combined biomass yield and lipid content.

Additionally, a significant portion of the assessments were made by extrapolating data from laboratory settings, which frequently do not match actual conditions on a commercial scale.

Energy return on investment (EROI), an indicator of sustainability assessment, is the proportion of energy produced by a given source to the energy required to produce it. When the EROI is less than 1, more energy is needed to create a fuel than is found in the fuel and coproducts.

For algal biofuels produced in open ponds or photobioreactors, the predicted EROI ranges from 0.13 to 0.71. For a fuel to be a sustainable energy source, it should have an EROI greater than 3.

To combat these challenges, researchers around the globe are working hard to make algae biofuels a reality.

Scientists from the National Renewable Energy Laboratory, United States have illustrated a novel integrated technology that paves the path for improved productivity and lower prices of algae biofuels.

The process uses medium temperature and low pH to more readily extract available lipids from the algae biomass to further process them into biodiesel.

This method can reduce per-gallon fuel expenses by up to 33 per cent compared to a standard lipid extraction-only method.

Phycobloom, a Cambridge and Oxford alumni startup, have developed an engineered algal strain that produces oil very efficiently without the requirement of any costly downstream machines.

A group led by Peter Ralph, professor at University of Technology Sydney, is working to tackle commercialisation barriers in the algae cultivation. One of the interesting projects that the group is working on includes ‘industrial CO2 sink using microalgae’. This has been funded by Siemens Germany.

To substantially reduce the algae biomass harvesting cost, a research group led by Anushree Malik at the Indian Institute of Technology, Delhi has designed different models of biofilm reactors to cultivate microalgae.

Algal biofilm reactors offer a robust cultivation system promising high biomass productivity, low harvesting cost and the ability to handle complex industrial effluents, said Malik, Anushree has been working with algae over a decade. “These have emerged as important tools for efficient resource recovery from waste streams in terms of algal biofuels.”

Though algae has not been able to perform well in the energy sector, rising fuel prices and constant pressure from international environmental bodies to find alternate green fuels have drawn researchers, technocrats and big investors towards it.

It will be interesting to see algae biofuels future journey with a hope to power our engines one day.