The Gharials of the Gandak: A conservation success story

Two recent surveys indicate that the Gandak, a trans-boundary river between Nepal and India, houses 210 gharials in the Indian section, the second-largest such population in the country after the Chambal 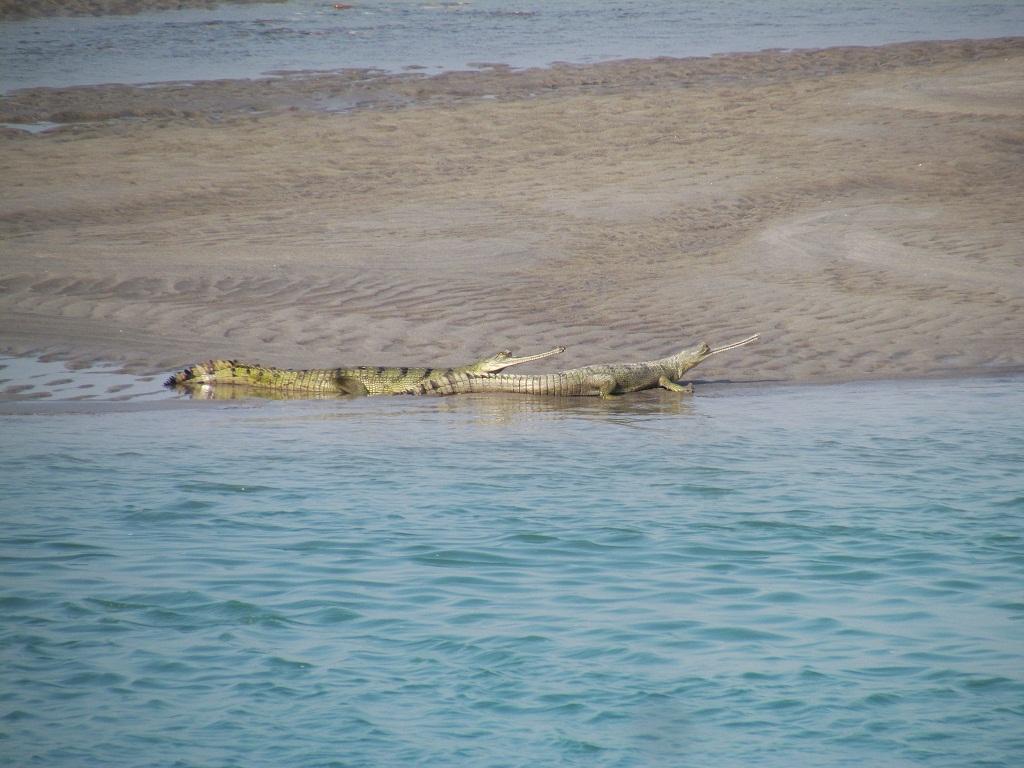 A pair of gharials in the Gandak river Credit: Samir Kumar Sinha

Some 20 years ago, the Gandak appealed to the Hindu in me, as a river that carried Shaligrams on her bed—a spherical black stone considered an iconic representation of Lord Vishnu. Later, I got to know that the Shaligram is actually a fossil of an Ammonite—an extinct group of marine animals that appeared during the Devonian Period, about 319 million years ago.

In 2003, I finally got to see the river as it entered the plains of Northern India at Valmikinagar in Bihar’s West Champaran district, after leaving Nepal, where it is known as the Narayani. Even more thrilling than seeing the fast-flowing river descending down from Nepal’s Churiya hills was seeing a couple of gharials (Gavialis gangeticus) basking on a sand bank in the middle of the river, approximately 5 km upstream from a barrage built across it in the 1960s. This barrage not only controls the Gandak’s flow but creates ecological blockage in it. Additionally, the guide bunds meant to control the river upstream from the barrage, disrupt its lateral connections with the adjoining floodplains, largely affecting the continuum of habitats of aquatic organisms—from microscopic plankton to large-bodied animals like river dolphins and gharials.

Sighting gharials in the Narayani in Nepal excited me. It kept my hopes of seeing them in the Gandak in India, alive, something about which I was not very sure earlier. The river is highly dynamic in the plains and has shifted over 100 km in its “mega-fan”. Such shifting has prevented human settlement and also shaped geo-morphological complexities like meanders, braided channels, riverine wetlands and vast floodplains collectively known locally as diara, which were, till 2007-08, actively infested by kidnappers and bandits. The infestation of the diara and adjoining forested areas with bad characters earned them the tag of “Mini Chambal”, especially along the inter-state border with Uttar Pradesh. The outlaws lorded over the remote area, making sure that it was not frequented by people. This also deterred research expeditions looking for gharials and other aquatic life in the Gandak until 2010, when the first survey in the river by different conservation organisations and the Bihar state forest department documented the presence of 15 gharials. However, today, I am sure the low number was due to unfavourable weather conditions for gharial sightings. Moreover, the presence of the remnant population motivated the Bihar government to commence the gharial conservation project. In 2014-15, Wildlife Trust of India (WTI), the Delhi-based non-profit for which I work, collaborated with the state government on the conservation project that had started, and helped in the translocation of 30 sub-adult, captive-reared gharials from the Patna Zoo to the Gandak River.

The gharial is “Critically Endangered” as per the IUCN Species Survival Commission assessment in 2007. Its distribution range has shrunk and currently, it occupies only about 2 per cent of its former range. The gharial population has registered a decline of up to 98 per cent between 1946-2006 and the adult population has nosedived, with a 58 per cent reduction across its range in just nine years from 1997. Obviously, the gharial is just one step behind extinction in the wild.

The Gandak river, on the Indian side, was never considered as a gharial stronghold, as it was largely unexplored. However, the construction of the barrage across it supposedly affected the gharial population in Nepal, where in the early 1980s, more than 200 gharials were extant. When India’s captive breeding programme for gharial conservation was conceived and started in the 1970s, the Narayani was the source of the first batch of eggs to kick-start the project.

The monitoring of the gharials released in the Gandak River produced remarkable finds—a released gharial crossed the barrage upstream and another covered over 1,000 km to reach the  Mahananda, another northern tributary of the Ganga along the Bihar-West Bengal border. Of more conservational importance was the discovery of a nesting site in 2016. With this, the Gandak became the fourth breeding site for the gharial in India, the other three being the Chambal, Girwa and Ramganga river systems. The WTI team located six gharial nests in 2016 and two in 2018 and protected the hatchlings successfully by involving locals. In a survey in March 2018, as many as 166 gharials were sighted in the 320 km stretch of river in India. Based on sightings of gharials in different age-groups in two consecutive surveys this year, we estimate a minimum of 210 gharials, including 42 adults, as being present in the river. This constitutes India’s second-largest gharial population after the Chambal river. In fact, this makes the Gandak a real “Mini Chambal”, literally. The number of adult males with a prominent “Ghara” on the snout—a typical feature of an adult gharial, is limited to four individuals in the entire river stretch. This is worrying and might risk the population in the long-term.

The presence of such a good number of gharials indicates the healthy condition of the river, especially disturbance-free zones, with sufficient food and availability of sand banks which are under great threat due to mining in other gharial-inhabited rivers in the country. But, it does not mean that conditions would be optimal for the gharial in the Gandak in the future.

Water works are well-known threats to aquatic fauna. The barrage across the Gandak has also been viewed as a reason for the decline in gharial populations in the upper reaches in Nepal. But, its effect on the downstream population in India is hardly understood, given that there is no baseline for the pre-barrage period. Two irrigation canals originate from both banks of the river at the barrage. Gharials often find their way into these canals, especially individuals upstream. A few of them are individuals released by the Nepalese authorities under the conservation initiative. Gharials in canals are prone to mortality once water diversion from the barrage is stopped. Recently, in one such incident, a sub-adult gharial released by Nepal was killed by fishermen in a canal in Bihar's Saran district.

The release of water in large volumes from the barrage during the breeding season erodes and inundates nesting sites. In 2017, the release of water in the last week of March destroyed all nesting sites along the river. This can be addressed through a dialogue with the Water Resources Department authorities controlling the barrage operation, to arrive at a consensus of not releasing water during the gharial nesting period. Another threat is notification of the entire river stretch as National Waterway 37 as per the National Waterways Act, 2016. Once implemented, such a move would wipe out the species from the river without any doubt. Ideally, the Gandak river should be declared a protected area under the provisions of the Wildlife (Protection) Act, 1972, to secure the future of the recently-documented gharial population. Together with the population in Nepal, the Narayani-Gandak river hosts about 400 gharials. Trans-boundary collaboration between the two countries for gharial conservation would also contribute towards ensuring the conservation of the largest population of the gharial in India outside the Chambal.