Disasters are not predictable. They follow no standard operating procedures. Disaster preparedness is about managing the unknown, not a science but a social behaviour that's responsive, predictive and imaginative.

• Preparedness: knowing where and when disaster will hit

• Mitigation: through measures like coastal zone regulation, building earthquake-resistant buildings, before the event.


The Orissa super-cyclone and the earthquake in Bhuj, Gujarat exposed serious limitations in India's preparedness system:

• During a crisis, the state administration is in charge; the c entral government only offers financial and material help

• Disasters are treated as a one-time crisis


Bhuj showed that science could be used to track earthquake-prone areas and specific earthquake monitoring and microzoning would help in this. Policy's role was to make sure that building codes on earthquake-proofing were enforced in vulnerable areas to minimise deaths.

An India Meteorological Department (imd) review showed 56 per cent of the country under various degrees of seismic threat. The official agency for earthquake warning in India, indeed all disasters, imd has 51 seismic observatories in different parts of the country. Less than half meet global standards or are even broadband.

One of the ways suggested to prepare for earthquakes after Bhuj was micro-studies of earthquake zones. To do this, microzonation (mapping seismic hazards, on an urban block-by-block scale, based on local conditions such as soil types that affect ground shaking levels or vulnerability to soil liquefaction) was the preferred method. Seismic microzonation reveals safeguards to be utilised during future earthquakes. 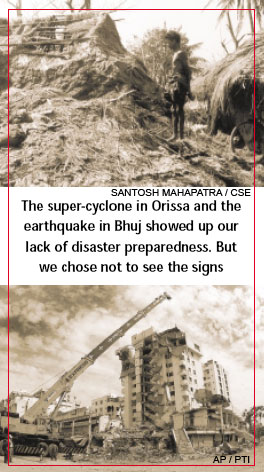 In India, microzonation was first carried out in Jabalpur, in Madhya Pradesh, hit by an earthquake of 5.8 on the Richter scale in 1997. Subsequently, the Department of Science and Technology (dst) supported two more pilot microzonation studies in Delhi as well as in Guwahati.

The Geological Survey of India is also mapping 22 other cities to review their vulnerability. In November 2004, the Union home ministry’s Disaster Management Division (NDMD) put together an expert committee to chalk out a national microzonation programme prioritising states, Union territories and cities to be mapped. The committee had members from DST, IMD, Department of Mines, the Indian Institute of Technology (IIT), Mumbai and Roorkee, and the Gujarat state disaster management authority (GSDMA). At the meeting, it was felt that different microzonation programmes (hitherto begun) lacked perspective. They simply wouldn’t have helped in planning to mitigate disasters like earthquakes, like the one that triggered the tsunami.

“More than microzonation, which is another layer of threat forecasting, what we need most now is enforcement of earthquake-resistant building codes,” says A S Arya, earthquake engineer and advisor to the Central government. Even the government’s own status report in 2004 on disaster management admits: “Although the Bureau of Indian Standards (BIS) has laid down the standards for construction in the seismic zones, these were not being followed.” In June last year, the GSDMA also reported that less than 20 per cent of new buildings in earthquake-affected areas of Gujarat have adopted the necessary building codes.

The situation in other states is no different. In just over three years, Chennai has been hit by the impact of two earthquakes; one in Chennai on September 2001 and now by the tsunami. Chennai was even upgraded from Zone-II to Zone-III in seismic activity in 2002. Yet, building codes were not enforced by the authorities. Ironically, only one year ago, the Tamil Nadu chapter of the Institution of Engineers hosted a meeting on the Urban Earthquake Vulnerability Reduction Programme.

The Disaster Reduction Management (DRM) programme (2002-2007) implemented by the Union home ministry and supported by the UNDP says: “Typically, the majority of constructions in these cities are not earthquake resistant. Thus, any earthquake in one of these cities would turn into a major disaster”. DRM is India’s only programme to ensure earthquake- resistant buildings in India’s 187 towns.

After Orissa and Bhuj

After Orissa and Bhuj, the Union government reviewed India’s disaster preparedness. A high powered committee was set up in 1999. By 2001, it had come up with ideas for a policy and the supporting institutional mechanism. For the very first time, it was acknowledged that ad hoc crisis management could be more expensive than investments in mitigation. The committee’s recommendations included:

After three years, this initiative has given way to inertia. The 10th Five Year Plan came and went without earmarking the recommended 10 per cent of departmental budgets. The much awaited disaster management act has also not been formulated.

Some time back, the Central government planned an elaborate exercise whereby the entire administration would be thoroughly overhauled and tuned for disaster management. This involved two lakh villages, around 200 towns, and close to 80 government departments and programmes. A draft of this policy was put down, but it is yet to be discussed. In 2002, the Centre asked the state governments to convert their departments of relief and rehabilitation into disaster management departments, with specific responsibilities of disaster mitigation and preparedness. This was to be followed by a separate ministry of disaster management at the central level. But after the tsunami, the nodal role of dealing with disasters is still being played by the Union home ministry. “The decision to formulate a policy and a legal framework to deal with natural disasters is a recent one. So policy and laws have just started taking shape and form,” says Shivraj Patil, Union home minister, briefing presspeople on December 29, 2004 about future plans. Many such plans have been made on paper, only never to see the light of day.

To generate funds for disaster prevention and preparedness, the 12th Finance Commission deliberated about fund allocation for disaster prevention and mitigation under the Central Calamity Relief Fund. This was a policy shift from the earlier practice of budgeting for only relief and rehabilitation. If it had been implemented, this would have given the whole disaster preparedness schedule a major momentum. However, in practice, states are still being funded the old way. This means state governments get allocation according to their spending during the previous financial year. A state that suffered a cyclone the year before would get more allocation, but a state facing a drought this year may not. Skewed policies mean disaster preparedness gets routinely derailed.

Where do we stand?

The last five years have given opportunities aplenty for India to test its state of disaster preparedness. It’s been a tough learning curve, with the mandatory ‘annual examinations’, from Orissa’s ‘super cyclone’ in 1999 to a mid-term earthquake in Bhuj in 2001.

A series of unit tests followed, in the form of droughts and floods, year after year, in state after state. And now, to round off the five-year disaster programme, the oceanic earthquake that triggered off the tsunami.

Looking at our response to these disasters, major and even minor, it is hard not to see the stark truth. India has failed every single test. Our reflex is a non-starter right from the initial transmission of information.

Post-disaster mismanagement further compounds the situation. For instance, after the Gujarat earthquake, the flow of information was identified as the single most important system that needed to be made effective in practice. But crisis management during the tsunami shows that we are yet to learn even this basic but all important lesson.

Bureaucratic hurdles make it worse. The government’s standards of procedure (SoP) prescribed for the duty room at the seismology section of the IMD says that an earthquake would be required to be reported to the CMG only if it had occurred within Indian territory or very close to the borders, irrespective of magnitude. This was the procedure followed during the tsunami (non) alert, when, despite getting news of tsunami only a minute later, IMD didn’t react.

The same procedure was relaxed in 1998 when India wanted to monitor its nuclear weapon tests in Rajasthan. “The dissemination of information, which is an administrative part, was not enough in this tsunami,” says N M Prusty, director (emergency and rehabilitation) of CARE India, a non-governmental agency (NGO) working with tsunami victims.

Seismologists also failed to gauge the earthquake’s geographical ramifications. The other side of Sumatra, the Pacific Ocean region, is a known tsunami-prone area. Tsunamis are less of a phenomenon in the Indian ocean. But they have occurred. Yet the Indian scientists monitoring such phenomena presumed that the earthquake in Sumatra wouldn’t affect the country or trigger a tsunami affecting the Indian coast, going purely by historical records of less tsunamis in the Indian Ocean.

Typically, there is an overdrive by whichever state faces the calamity. Orissa, Gujarat and Andhra Pradesh have set up committees and made extensive plans. After Latur in 1993, an elaborate Disaster Management Plan (DMP) was worked out for each district in Maharashtra, but not put into practice. The initial panic reaction soon wears off and even routine precautions are forgotten. Annual emergency drills mandatory for the district administration are not carried out. No wonder, as soon as the first news of a disaster comes in, the first thing to be thrown out of gear is the entire government machinery. 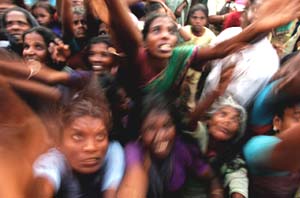