The Rythu Swarajya Vedika called on both Centre and state, to bury their hatchet and ensure disaster relief to lakhs of affected farmers 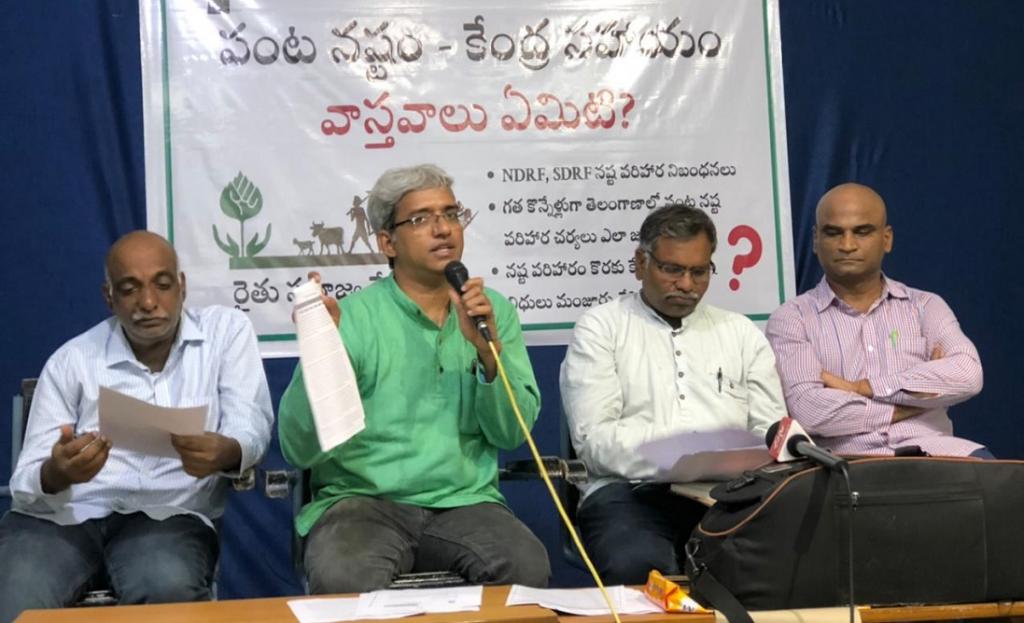 The farmers of Telangana have faced unprecedented crop losses in the wake of heavy rains and floods this month. The government should immediately compensate them, an independent farmers’ organisation based in the two Telugu states said July 23, 2022.

Activists of the Rythu Swarajya Vedika (RSV) also called out the Telangana government’s policies towards farmers.

The organisation called on both the Centre and state, who have been engaged in a political slugfest, to bury the hatchet and ensure that disaster relief reaches lakhs of affected farmers.

Telangana has been hit by flooding twice in a fortnight now. The first round of flooding happened around July 15 along the Godavari river. On July 22 and 23, heavy rains inundated low-lying areas in Hyderabad and its neighbouring districts such as Medak, Sangareddy and Mahbubabad.

The Met Department has said Telangana is set to get more rains over the next three days. The state’s north and north-eastern districts are set to receive heavy rains and a red alert has been issued for north Telangana districts, Met Department director K Nagaratna told this reporter.

“Up to 20 centimetres of rain is expected in some places. We have given a flood warning for the state. As of now, we have received 119 per cent rainfall and Nizamabad and Karimnagar districts have received highest rains,” she added.

The RSV expressed concern over extensive damage to cotton, maize, soyabean and red gram crops due to the heavy rains and overflowing waterbodies.

The activists cited preliminary reports of crop damages over 445,154 hectares across the state. They sought immediate enumeration of crops, livestock and lands affected.

They also criticised the government’s lack of data regarding tenant farmers.

“Details of actual cultivators including tenant farmers should be noted down immediately. The Telangana government has refused to implement the Licensed Cultivators Act 2011 and failed to identify lakhs of tenant farmers,” Kiran Vissa, from the RSV, who is in the All India Kisan Sangharsh Coordination Committee, said.

“It would be difficult for the government to zero in on tenant farmers and pay compensation in the future if not done soon. Not doing so now would only lead to the government taking the plea of being too late,” he added.

The activists also took exception to giving a go-by to the standard practice of farmer-wise enumeration of crop loss immediately after a disaster.

They said this had led to a handicap even when funds were available. Compensation was provided in 2018 in Adilabad and Khammam districts purely owing to the initiative of the district collectors as they had data and most of the amount went to those districts, the RSV said.

They also highlighted the issue of crop insurance schemes. Telangana exited the Centre’s Pradhan Mantri Fasal Bima Yojana from the kharif season of 2020.

However, it had failed to establish its own schemes unlike other states such as Andhra Pradesh, West Bengal, Gujarat and Tamil Nadu. Its farmers thus had not received any compensation despite heavy losses.

Kanneganti Ravi, RSV activist said taking the Telangana government to the High Court for the State of Telangana twice over the past four years over payment of compensation to farmers had not resulted in changing its attitude. In 2018, it was forced to distribute a meagre Rs 23 crore as input subsidy.

“The state went on appeal to the Supreme Court after it lost the case and failed to pay the Rs 188.23 crore for crop losses approved by the Centre between July and September 2021. This despite the state’s crop damage assessment of Rs 552 crore according to the NDRF scale of relief,” Ravi said.

He added that this exposed the claims of generosity by the Centre to the state. “The state government’s failure to fulfil its promise to waive farmers loans has resulted in denial of fresh loans from banks to farmers,” he added.

Telangana has failed to adhere to norms laid down according to guidelines issued in July 2015 and failed to submit reports of expenditure incurred.

Funds according to norms are released by the NDRF, subject to spending of 50 per cent of funds available with the SDRF.

As the SDRF had Rs 977 crore on March 31, 2020 (according to the state accountant general’s letter) and the approved Rs 245.96 crore was less than 50 per cent of the amount, new funds were not released by the Centre. This laid bare, the claim of lack of central assistance for disasters, the RSV factsheet said.

It further said the state government had made mutually contradictory statements in the apex court. It claimed lack of assistance from the Centre despite submission of damages.

At the same time, it said the entire affected crop was recovered completely in October 2020. It thus deduced no need for compensation payment and added that it was too late to identify the farmers now.

This stand has continued despite pronouncements by the state agriculture minister. He had made them after visiting chilli and fruit farmers in Warangal in the aftermath of a hailstorm in January 2022.

Chief Minister K Chandra Sekhar Rao had also seconded this proposal. But farmers are yet to receive any compensation.

The RSV also pooh-poohed the claims of the Telangana government over non-cooperation by the Centre in disbursal of relief funds. They showed a letter from the accountant general to the Union Ministry of Home Affairs as proof.

The RSV said the state should immediately submit its pending accounts for earlier expenditure from SDRF and their current status. If the funds have been spent on Covid pandemic relief, the same should be made public. They also called on the Centre to immediately release full assistance for disaster relief.

Absence of such relief would only add to the growing number of farmer suicides, especially of tenant farmers, B Kondal Reddy, convenor of RSV, said.