Post 1991, why has agriculture grown at 1 per cent while the industry at 8 per cent? 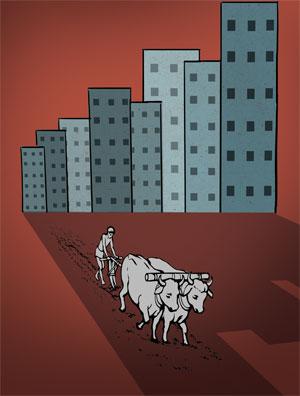 Before Independence, the British enslaved Indian farmers. Today, they are betrayed by our politicians, ignored by bureaucrats, exploited by intermediaries and shunned by the elite. In social functions, the farmer’s family sits in the remotest corner of the room because it does not dress “appropriately”, the wife devoid of a mangalsutra, which has been mortgaged or sold. The sunburnt “ugly” faces of the farmer’s family are unmistakable.

After the 1991 economic reforms, India claims to have become a world economic power. But is it so? Between 1991 and 2016, why has agricultural growth stagnated at around 1 per cent while the services sector and industry grown at 8 per cent? Are farmers inefficient or does the problem lie with our policymakers? The service sector and industry get best technologies, investments and incentives. Are these provided to farmers? Our leaders, administrators, planners and economists must answer.

Farmers have organised violent agitations in Maharashtra and Madhya Pradesh demanding loan waiver, minimum support price (MSP) at 50 per cent above the cost of production and implementation of the 2006 M S Swaminathan report (the MSP rate recommendation was part of the report). The loan waiver assumed great relevance after Prime Minister Narendra Modi announced it to win the Uttar Pradesh Assembly elections. Modi’s failure to keep his 2014 election promise of implementing the Swaminathan report has also been taken very seriously by farmers across the country. A person who fails to keep his/her word is looked upon with contempt and not considered trustworthy.

During 2015-16, farmers were bewildered at Modi’s direction to the chief ministers of Madhya Pradesh and Chhattisgarh, asking them not to purchase grains at above MSP. What has Modi got to do with state governments’ decision to help farmers? During 2015-16, the Union government incentivised production of pulses and oil seeds. But when the produce came to market there was no procurement by the government. The mandiwalas made windfall gains at the cost of farmers by undermining the prices by 50-70 per cent. To make matters worse, the government encouraged importing huge quantities of certain grains. This led to a further fall in the prices. The demonetisation drive, during which there was a severe shortage of cash for about 150 days, dealt a crippling blow to farmers. By March 2017 almost every farmer was facing a debt. It is at this juncture that the announcement of the farm loan waiver for Uttar Pradesh was made, which fuelled farm agitations in Maharashtra.

The present situation has arisen due to historical reasons. Farmers lost confidence in the Congress party in the 1980s, having realised that the then prime minister Indira Gandhi and her coterie were pursuing politics of “divide and rule”, not of development. Even after the 1990s reforms, Congress prime ministers did not attend to the development needs of the farm sector. The Swaminathan report was initiated by Congress, but its leaders Sonia Gandhi and Rahul Gandhi never understood its importance. There was no Congress leader to pursue it during the NDA rule.

Farmers are not meek, weak or stupid. They boldly face the fury of nature and the brutalities of animals every day. What has made them cynical is the betrayal by fellow Indians working in the organised sector. Farmers continue to be divided on the lines of caste, creed and language and this has prevented them from becoming a unified force. Analysing problems and finding solutions are the key for their movement to succeed. They have the strength and courage to stop their exploitation and get equitable share in the budget.

Reddy is Chief Adviser to the Consortium of Indian Farmers Associations