60% of all coral reefs bleached in Maldives: IUCN 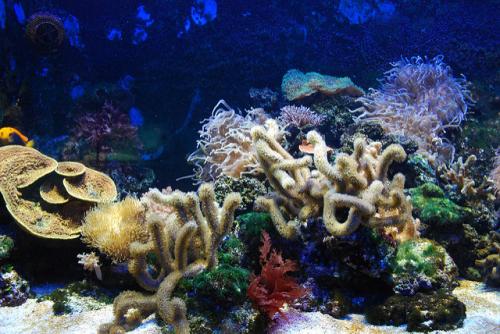 A recent survey by international bodies has found that approximately 60 per cent of all coral colonies have been bleached. The amount of bleaching has touched up to 90 per cent in some of these sites.

The survey was conducted by the Maldives Marine Research Center (MRC) and the Environmental Protection Agency, in partnership with International Union for Conservation of Nature (IUCN).

The preliminary findings of the scientific survey examined the impact of the climate change-related mass bleaching in the Maldives in 2016. A team of experts from 11 national and international institutions and universities studied the event.

Maldives is home to about 3 per cent of world’s coral reefs and the low-lying nation is extremely vulnerable to climate change with an average height of 1.5 meters above sea level.

“Bleaching events are becoming more frequent and more severe due to global climate change,” says Ameer Abdulla, research team leader and senior advisor to IUCN on marine biodiversity and conservation science. “Our survey was undertaken at the height of the 2016 event and preliminary findings of the extent of the bleaching are alarming, with initial coral mortality already observed. We are expecting this mortality to increase if bleached corals are unable to recover.”

The survey was funded by the US Agency for International Developmen and was undertaken in Alifu Alifu Atholhu (North Ari Atoll). Atoll is a ring-shaped island formed by corals reefs.

Life in the reefs

Corals get their vibrant colour from billions of single-celled microscopic algae that live in the hard corals. Coral reefs are one the most diverse ecosystems on the planet. They protect coastlines by slowing down waves, provide shelter for fish and breeding grounds to lay eggs. They are important for maintaining the nutrient cycle in oceans and regulating nitrogen underwater. The vast marine life supported by coral reefs is, additionally, a huge tourist attraction.

Corals are very sensitive to changes in water temperature, light intensity and water acidity—a characteristic directly related to CO2 in the atmosphere. When water gets warmer, algae is expelled from corals, leaving behind only a skeletal structure made of calcium carbonate—a process called coral bleaching as the corals turn completely pale or white. Severe bleaching can often lead to dead reef which, more or less, looks like an underwater graveyard.

The Maldives government has set up the Maldives National Bleaching Task Force led by Marine Research Center (MRC) for monitoring the reefs and their recovery. Practices like dredging, sand replenishment and fishing of herbivorous fish—important for the replenishment of corals—are being discouraged.

The programme enables marine biologists, citizen scientists and divers across the Maldives to contribute data that will help in assessing the effects of bleaching. MRC and IUCN, preparing for this predicted bleaching, conducted two workshops in June and December to train citizen scientists.

“As part of our management guidance to local communities and resorts, we have emphasised (on) the importance of reducing local stressors such as sedimentation, pollution and overfishing of herbivores,” says Naeem Ibrahim, director general of the Environmental Protection Agency.

In July, there were reports of the Great Barrier Reef, the largest coral reef in the world stretching over 2,300 kms, undergoing a complete ecosystem collapse as a result of bleaching. Some estimate the cost of restoring the Great Barrier reef to be around US $8 billion.

Ocean and coral reef conservation will be among the issues highlighted in the IUCN World Conservation Congress 2016 to be held in Hawaii.