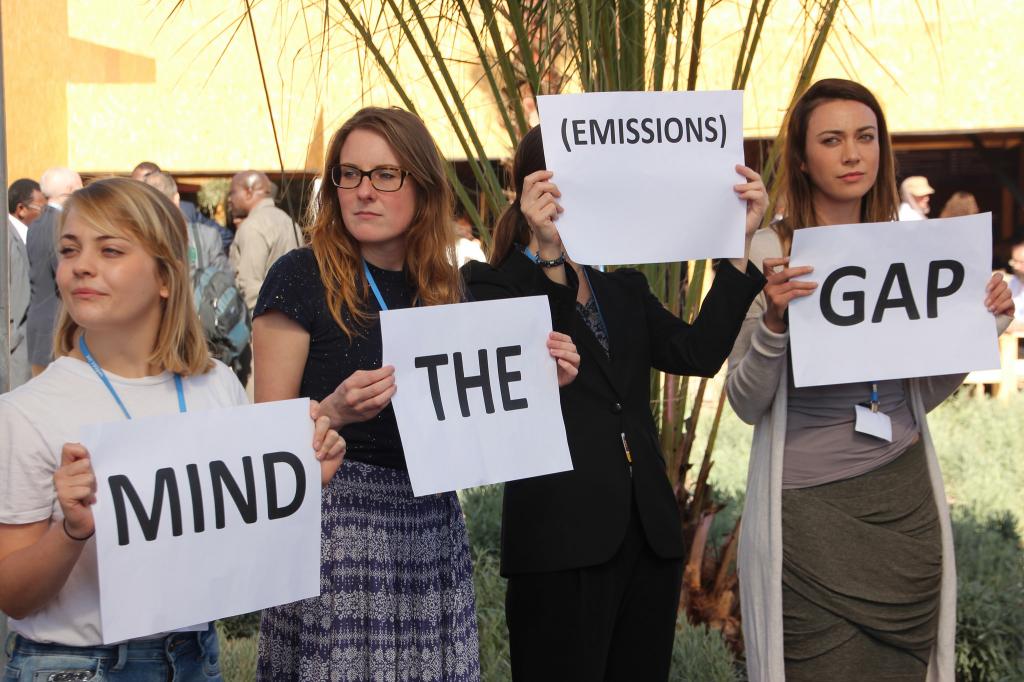 The Emission Gap Report clearly underlines that the current efforts lead us to 2.9°C to 3.4°C future. Credit: Takver/Flicker

H.E. Aziz Mekouar, serving as the Ambassador and Head of Negotiations for COP 22/CMP 12/CMA 1, Ministry of Foreign Affairs, Morocco, summed up the first part of the facilitative dialogue which took place on November 11, 2016. He remarked that all the Parties are making progress in implementing their climate targets before 2020 and contributing to reducing emission gaps. He highlighted that Nationally Appropriate Mitigation Actions (NAMAs) are emerging as a key provision of pre-2020 actions undertaken by the Parties, especially developing countries.

Mekouar highlighted a range of pre-2020 actions, which comprised funding mechanisms, energy efficiency, building and appliances standards and sustainable transport. He spoke of developing countries’ increasing importance on adaptation finance and other means of implementation and developed countries' focus on the importance of enabling environments in developing countries to facilitate such transfer. The barriers to the transfer of funds and technology also need to be worked on. He spoke of Sustainable Development Goals (SDGs) as important instrument for decreasing emissions and highlighted the importance of Kigali Amendment in HFCs and also of pact signed on aviation recently.

Even though he harped on the progress undertaken by the Parties, he also observed that the Emission Gap Report clearly underlines that the current efforts lead us to 2.9°C to 3.4°C future and reiterated that 12-14 GtCO2 is to be reduced globally. The importance of adaptation and loss and damage and meaningful engagement of civil society were also flagged by him in his 10-minute wrap-up speech.

European Commission Director General, Jose Delbeke, spoke about how the European Union is on its way to achieving its pre-2020 climate commitments by cutting down 22 per cent of emissions against 1990 levels which is 2 per cent more than its commitment of 20 percent. Besides highlighting the importance of “early action” to address climate change, he stressed on how nationally determined contributions should turn into policies and get implemented.

Siti Nurbaya, Minister of Environment and Forestry of Indonesia, spoke about the developed countries undermining pre-2020 actions as the whole focus is on Paris Agreement and post-2020 actions. She highlighted the importance of ratification of the second commitment period of the Kyoto Protocol for enhancement of pre-2020 actions, especially by the developed countries. She also highlighted the efforts taken by Indonesia in the field of redd plus for restoration of forest lands, energy sector, clean energy sources and its ambitious target of renewable energy source of 23 per cent by 2025 and 30 per cent by 2030.

Ravi Prasad, Joint Secretary on Climate Change, India seemed to be against the idea that there was good progress for pre-2020 actions. According to him, the ambition for pre-2020 cannot be put on “cold storage” while the world talks of post 2020 actions. He emphasised time-bound ratification of second commitment of Kyoto Protocol and suggested April 2017 deadline for the same. He remarked how conditionalities prove to be a major barrier in means of implementation to developing countries and stressed that pre-2020 efforts must be based on equity and Common But Differentiated Responsibilities (CBDR). He also said that there is lot of scope for sustainable consumption patterns globally.

Louise Métivier, Chief Negotiator for Climate Change, Canada spoke of the importance of mobilisation of non-state actors which included cities and sub-national organisations and civil society. She also spoke of integration of domestic climate plans for greater outcomes related to pre-2020 actions.