India ranks sixth in conversion of land surface to water

Around 115,000 square kilometre (sq km) of the world’s land surface has changed to water in the past 30 years, a new research has found. During the same period, 173,000 sq km of water covered surface also turned to land.

The highest conversion from land to water was observed in the Tibetan Plateau—7,661 sq kms. This change has been attributed to the melting of glaciers in the region. Around 7,058 sq km land in the Amazon river basin is now under water, making it the second largest land to water conversion worldwide.

The Aral Sea in Asia, which was once the fourth-largest lake in the world, stands out in the conversion of water-covered area to land. The lake has lost over 27,841 sq kms of water surface, larger area than the Indian state of Meghalaya. Since the 1960s, Soviet engineers diverted away the rivers that emptied into the lake, for irrigation, causing it to dry up. In recent years, restoration programmes have had positive impact on the North Aral lake, which has also been recorded in the study.

Researchers used satellite images recorded from NASA’s Landsat satellites over 30 years—from 1985 to 2015—to study the global changes in land and water surfaces. The research was conducted by a team from the Deltares Research Institute in the Netherlands and published in journal Nature Climate Change. 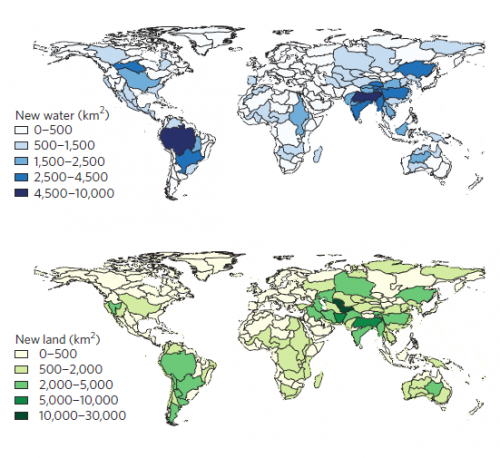 In India, 3,677 sq kms turned from land to water surface while 3,851 sq kms of water-covered surface was converted to land. The country holds a position in the top 10 lists of both the quantitative analyses: sixth in land to water conversion and eighth in the reverse.

The Ganga-Brahmaputra river delta (Sunderban), the largest river delta in the world lost 5,495 sq kms land to water, largely due to natural causes. On the contrary, Meghna, another key river of Bangladesh, is shrinking. Nearly 9,580 sq kms of water-covered surface of Meghna, is now land.

Lead author of the study, Gennadii Donchyts, who is an expert in environmental modelling software, says, “The main triggers of the surface water changes across the world are: natural processes (migration of rivers, coastal erosion), longer term climate variation, and man-made interventions (land reclamation, construction of the reservoirs, harbours, intentionally or unintentionally drying up larger areas).”

Donchyts adds, “Aqua Monitor can be used to identify areas where surface water changes are present, but also, to study inter-annual dynamics, showing how surface water on average was changing from year to year.”

However, he acknowledges the shortcomings of the software, “We must take into account the variable frequency of satellite measurements, it is not same from year to year and this may have influence on the results as well.”