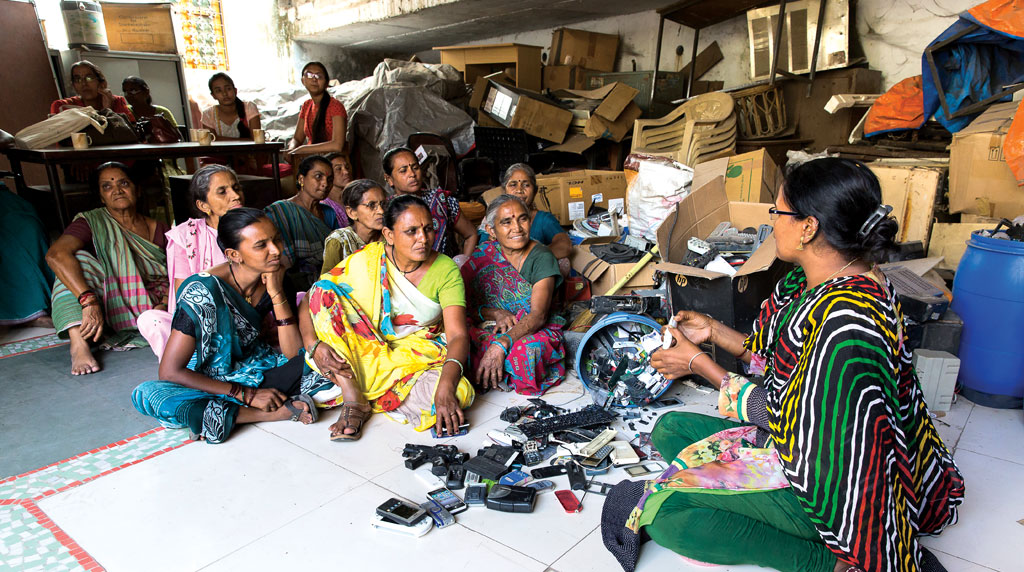 Savita Devi (name changed), a municipal solid waste worker in Ahmedabad city, used to earn Rs 1,500 per month. When she joined an initiative of GIZ India in 2012, where she was trained to collect e-waste, her income rose to Rs 2,500 per month. “We are now able to hire private tutors to educate our children,” says a ragpicker. The initiative has also led to the channe-lisation of e-waste to authorised dismantling and recycling units. The project is run by SEWA-Gitanjali Cooperatives, which is a joint collaboration with Deutsche Gesellschaft fur Internationale Zusam-menarbeit (GIZ) India and Microsoft Corporation.

India generated around 1.7 million tonnes of e-waste in 2014, says a UN report. E-waste is a complex waste stream as it contains rare and valuable components and materials worth recovering. But it contains toxic materials which can harm human health and the environment. A study done by the Centre for Science and Environment (CSE) in Moradabad’s informal e-waste recycling units revealed heavy metal contamination in water and soil samples. The contribution of waste workers in the informal sector has long been neglected and ignored, though they are considered key economic actors, who feed the recycling market. They lack formal recognition, safe livelihoods and dignity. Worse, they are exposed to dangerous tox-ics that can damage to human health.

The Ahmedabad initiative has been able to channelise about 4,950 kg of e-waste each year. “Women workers need to devote only two hours weekly, compared to earlier days when they used to spend the entire day sorting and collecting waste,” says Varsha Ben of SEWA.

The success of e-waste management and handling lies in the integration of in-formal sector into the formalisation loop. In Kolkata, non-profit DISHA has initiated the process of formalising informal units so that after dismantling, the waste can be sent to the authorised recyclers. “This has helped secure the livelihood of workers,” says Sasan-ka Dev, secretary of DISHA.

E-waste recycling—from the household to the dismantling unit—is a three to four tiers process. At present, apex traders con-trol e-waste trading in the informal business market. DISHA worked with middle level collectors of e-waste and also tied up with an authorised recycler in Tamil Nadu. In the last 18 months, about two tonnes of dis-carded mobile phones and its parts have been collected and channelised to the auth-orised recycling unit. Now, ragpickers get immediate monetary returns, and prices on products are fixed, which otherwise would have been the apex trader’s decision.

In Pune, a public-private partnership, under the EU Switch Asia-WEEE recycle project, has integrated 192 informal small and medium-sized enterprises (SMEs). Here, the Pune Municipal Corporation fulfilled its responsibility, under the e-waste rules, by providing support in the form of land to set up a collection facility.

In Bengaluru, SAAHAS, a non-profit, pro-vided support to establish four SMEs, who have established linkages with the Indian Space Research Organisation (ISRO) to han-dle 40 tonnes of e-waste. The initiative is achieving sustainability through the establishment of business cycles—SMEs are buy-ing e-waste and re-selling it to larger authorised recyclers. “To make a business case, the producers, manufacturers, re-cyclers and the government need to encourage decen-tralised set ups of e-waste collection points run by companies, civil society-led organ-isations or cooperatives to formalise in-formal workers,” says Rachna Arora, senior technical adviser, GIZ.

Though the E-waste Rules, 2011, and the draft E-waste Rules, 2015, lay the responsi-bility of managing e-waste on the producers and manufacturers, under the principle of Extended Producer Respon-sibility, manufacturers are not implemen-ting it, as the existing rules lack the scope for bringing the informal sector into the loop of formalisation (see ‘The impediments...’).

These initiatives have shown how the informal e-waste sector can be streamlined and formalised. But more importantly, these initiatives have recognised the role of waste workers, creating new livelihoods, improved working conditions for women and enhanced social and educational status for their children.