The unbearable burden of 2015

This is the second full budget of the NDA, coinciding with the second year of its governance 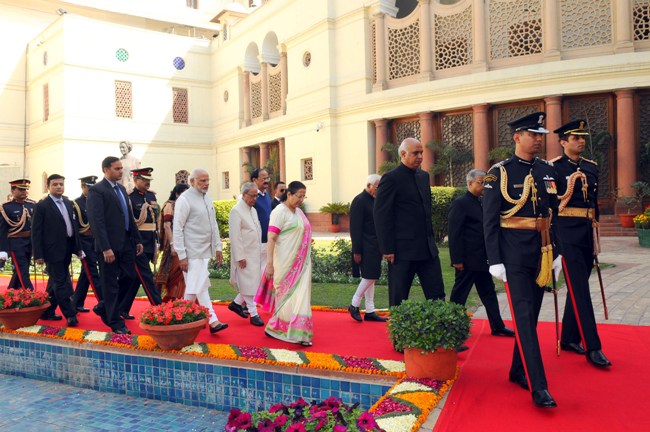 As the Narendra Modi government prepares for the 2016 Budget, here is a look at developments that will shape the Centre’s spending next year.

The first full budget of the National Democratic Alliance (NDA) last year did not make any bold reform attempts nor did it articulate focus areas for the government.

However, it started the fiscal decentralisation process after accepting the recommendations of the 14th Finance Commission.

The current budget to be presented on February 29 is being eagerly pursued. More to it, this is the second full budget of the NDA, coinciding with the second year of its governance.

But there are tough situations that will have a definite influence on the budget. Below is a compilation of a few developments that should influence the Union Budget 2016.

During 2016-17, nine states will go to the polls, including major states such as West Bengal and Uttar Pradesh. Politically, this puts the government under tremendous pressure to play the populism card.

But at the same time, a five-year term government usually keeps the last two budgets as preparation for the next elections. This means, for the NDA this is the only space left to articulate its reforms as well as to fight the perception of being anti-poor. It is a tough call.

India is witnessing a deep agrarian crisis with agricultural growth hitting almost zero level. This is the second consecutive monsoon failure and half of the country is under drought.

It was preceded by an unseasonal rainfall that damaged crops over 15 million hectares. As farmer suicide cases are being reported widely, the rural wage rate—an indicator of bad economic situation—is dipping, thus threatening the national economic growth. The government has to spend well in rural areas not only to arrest the crisis, but also to boost the national economy.

The Government of India does not have much money or the wherewithal to source money to increase public spending significantly. Private investment is not picking up and banks are under tremendous pressure of non-performing assets or bad loans (NPAs).

This means they do not have the capacity to lend any further. It is certain that to tide over the NPAs, banks will also bring down agriculture loans that will affect farmers. As revenues are strained, the government will also not be able to spend big way in rural development. However, if it chooses to do so, it has to cut down on some sectors, like incentives to corporate sectors.

After the spectacular devolution of the divisive pool of taxes in the last budget to states, the central government will continue to do so in this budget also.

But this means, like the last budget, less money at hand, thus directly resulting in cutting allocations across sectors. Due to such cuts during the last budget, the government faced widespread protests from civil society organizations and the perception of the NDA being anti-poor gradually set in. This year, it will face the problem to an even greater extent as the social sector needs spending to boost the economy as explained above. From where will the government get the money?

The role of states

With the fiscal devolution, states are practically the biggest spenders in the social sector. In turn, they also hold the key to enhance rural consumption/spending by allocating more funds to rural programmes.

But till now, that has not been the case. How will the government this time ensure that states actually spend the money for the right causes? There are no legal binding terms on the states to spend on a specific sector as the devolved funds are untied. This further restricts the central government’s scope for increasing rural spending.