Rajaji National Park area villagers allege they tried to lodge two FIRs, but police did not register them

The story has been updated to say that as of July 4, 2020, four arrested women had been released. However, three people, including 80-year-old Ghulam Mustafa, are still under arrest. Two young boys, one of whom is a juvenile, are also still under custody. Their bail applications will be heard on July 6.

DTE had earlier reported that seven arrested people arrested, as on June 30, were released on bail but continued to face charges such as attempt to murder.

People belonging to the Van Gujjar community in Uttrakhand’s Rajaji National Park area have alleged at least six officials from the state forest department tried to demolished their deras (makeshift huts) and ‘physically assaulted’ them on two occasions.

Ghulam Mustafa Chopra (80) and his daughter (40) in a complaint alleged that on June 16, 2020, “forest officials beat the woman with sticks, tore her salwar and dragged her on the floor by her hair”.

This allegedly happened after the father-daughter duo resisted the officials’ attempt to demolish their camps, claiming their forest rights under the Scheduled Tribes and Other Traditional Forest Dwellers (Recognition of Forest Rights) [FRA] Act, 2006, were still pending at the block level, according to villagers.

According to the complaint, the woman “presented references to the apex court’s stay on eviction and a High Court order that recognises legal rights of the community over the land.” 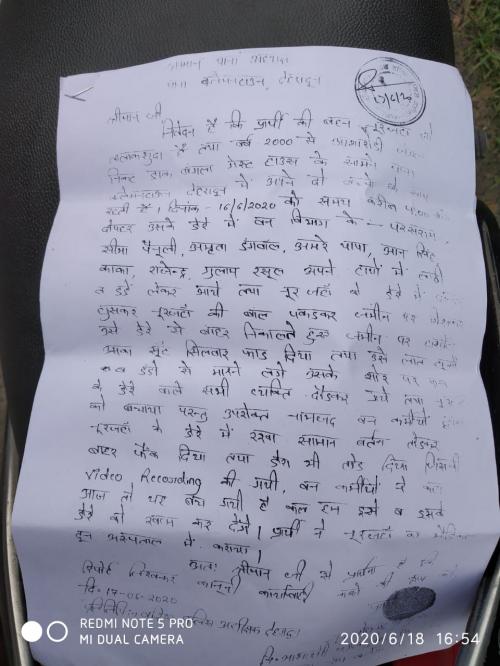 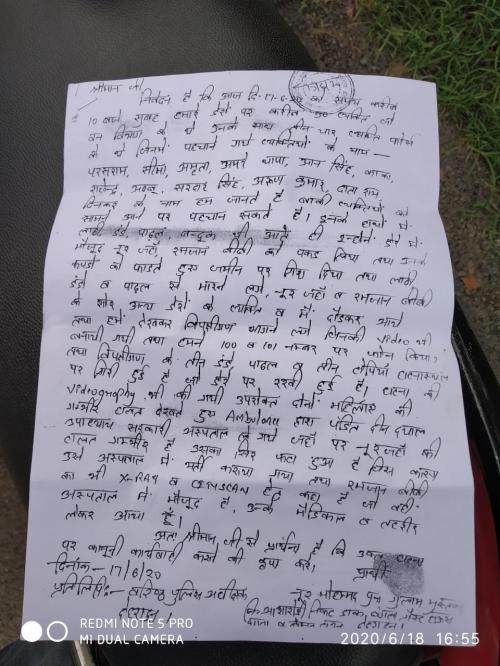 Copy of complaint by Mustafa and his daughter.

The villagers in the Aasa Rodi range alleged that on June 17, the officials returned with at least 30 others and allegedly assaulted women. According to the complaint letter, they had sticks, batons and guns. It alleged that as women lost consciousness and were bleeding, they were taken to Pandit Deen Dayal Upadhyaya government hospital in Dehradun.

The medical certificate accessed by the villagers from the hospital mentioned “active bleeding” and “lacerations”. 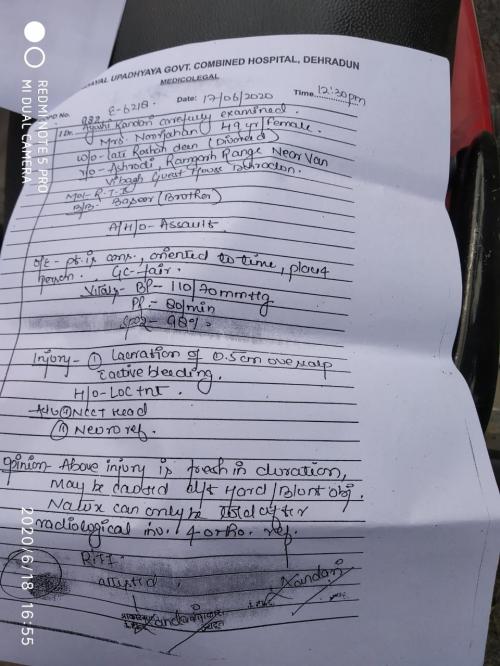 The villagers alleged they tried to lodge two first information report (FIR) — one against the officials and the other against assault on the women.

The station officer (SO) of the Clementon Town police station, Narottam Bisht, however, denied having received any such complaints / requests to register FIRs.

The police, however, lodged an FIR against them under as Sections 147 (rioting), 148 (rioting, armed with deadly weapons), 504 (provocation and disrupting public peace), 506 (criminal intimidation), 333 (voluntary causing grievous hurt to public servant during the discharge of his duties) , 353 (grievous hurt to public servant, obstructing him to discharge his duties), 307 (attempts to murder) of Indian Penal Code.

Down to Earth has the copy of the FIR.

SO Bisht claimed, “Some people were arrested [from Aasa Rodi range]. We received a call and were informed that the Van Gujjars were encroaching the land. When forest department officials reached there, the villagers attacked them.

However, on being asked about the stay from the Supreme Court on eviction and the High Court order which forbids eviction unless all claims under FRA are settled, the SO said, “We aren’t in the position to comment on that.”

It is too early for me to comment on the matter as I am yet to start the investigation. I am expecting an official communication soon. It is a fact, however, that Van Gujjars have been residing in the area for many years.

He added: “Some Van Gujjars in the area have been relocated and rehabilitated according to the FRA, 2006. However, some claim that they have been left out of the process. Their claims need to be verified and investigated”.

Following the FIR, as many as seven villagers, including Chopra and his daughter, were arrested on June 18, according to Tarun Joshi, coordinator of the Uttarakhand Van Panchayat Sangharsh Morcha.

The relatives who visited them alleged “torture to Mustafa and daughter in detention”. The photos of Mustafa’s injury from the purported incident were produced before the court. 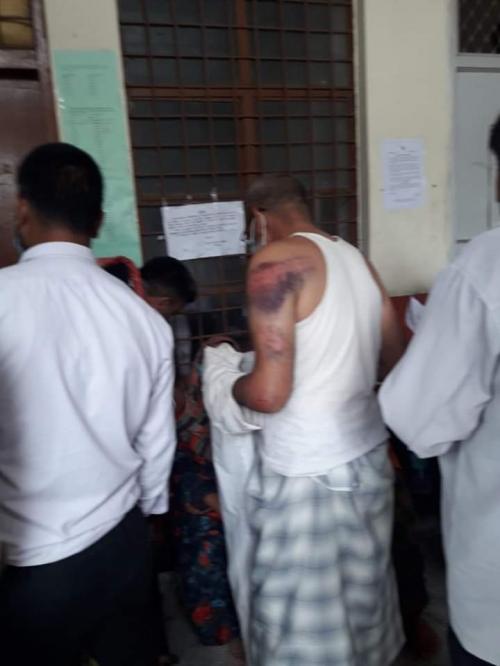 Mustafa was injured during the alleged assault

A relative alleged that the “woman was hit on her private parts”. One more woman was also allegedly hit by the officials. However, the medical certificate, allegedly prepared by the police, showed they were “fit”.

Four arrested women had been released as on July 4. However, three people, including 80-year-old Ghulam Mustafa, are still under arrest. Two young boys, one of whom is a juvenile, are also still under custody. Their bail applications will be heard on July 6.

Meanwhile, activists working in the area have requested Uttarakhand’s forest minister to investigate the incident.

Located along the foothills of the Shivalik range, the Rajaji National Park spans 820 square kilometres and is home to the Van Gujjars in the winters. The tribe is one of the few forest-dwelling nomadic communities in the country.

Usually, they migrate to the bugyals (grasslands) located in the upper Himalayas with their buffaloes and return only at the end of monsoons to their makeshift huts, deras, in the foothills. The Van Gujjars traditionally practice buffalo husbandry; a family owns up to 25 heads of buffaloes. They rely on buffaloes for milk, which gets them a good price in Uttarakhand and Uttar Pradesh markets.

They have been known to make a sustainable use of forest resources as forests cater to fodder needs of the cattle. “Their movement this season was severely restricted due to the novel coronavirus disease (COVID-19) lockdown,” said Joshi.

He added that he spoke to Chief Secretary Utpal Kumar Singh who then sent letters to the forest departments, but the movement wasn’t still allowed.

He claimed they tried to arrange fodder for the tribe’s animals. “But the forest department didn’t do anything about it,” he said.

More than 64 per cent of Uttarakhand’s geographical area is under the control of the forest department and a huge chunk of the population is dependent on forests.

Joshi added, “Every time the park administration changes, they want to establish an image for themselves. In this case also, as soon as the administration changed, park director Amit Verma announced, without going through the records, that he will remove all the ‘illegal encampments’ from the 10 ranges that fall under the area of RNP.”

Verma was unavailable for comments despite several attempts to reach out to him for three subsequent days.

Until and unless the Van Gujjars are not settled under the Forest Rights Act, 2006, no eviction can take place.

The community, however, continued facing several other issues. Joshi added, “Another major problem was that of milk sales. Now that things are opening up, the rates of milk have drastically reduced from Rs 40 a litre to Rs 20 per litre.”

Meanwhile, activists met Uttarakhand Governor Baby Rani Maurya on June 24 and demanded an enquiry into the matter and withdrawal of all cases against villagers.