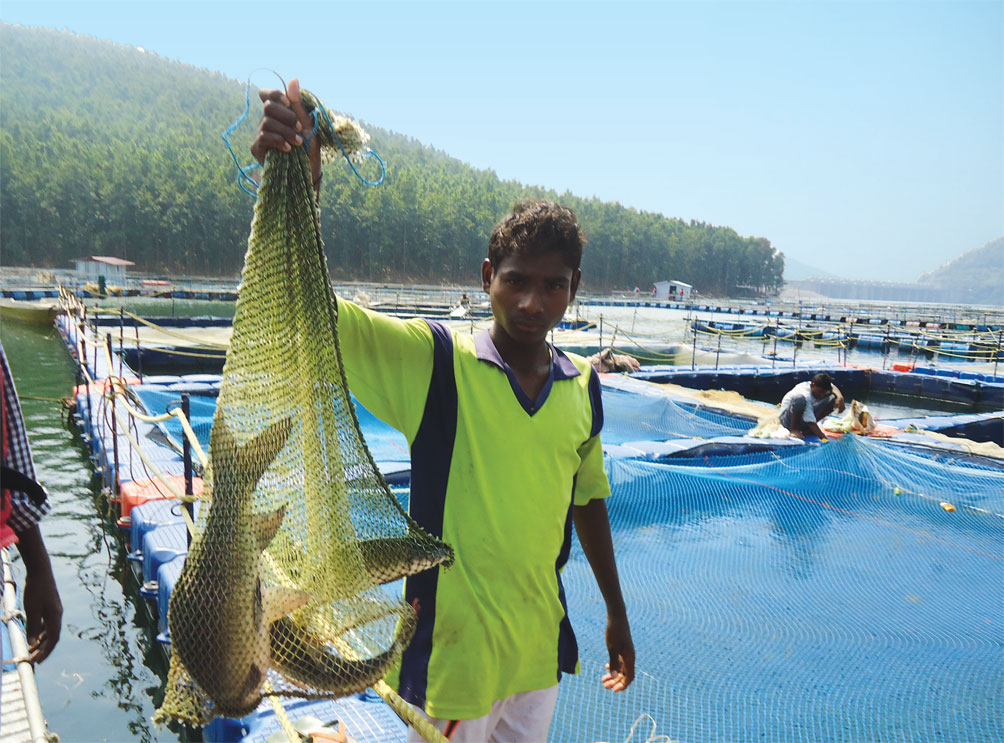 AFFLUENCE IS not a word one would normally associate with Jharkhand’s Jamukhadi village, which falls in one of India’s 250 most backward districts. But almost all the houses in the village have TV sets, computers and motorbikes. “There were only a few pucca (brick) houses in our village till 2000 when the state was created. Today, 80 per cent of the houses are pucca,” says Rameshwar Paswan, a proud resident of the village in Koderma district. He also owns a truck and two pokland machines that he bought with friends for soil excavation. Paswan’s story depicts the meteoric growth the village has witnessed in the recent past. Till 2013, he was a labourer who would occasionally catch fish from the Tilaiya dam reservoir in Koderma district. “Today, I do commercial fishing in the dam and earn over Rs 16 lakh a year,” says he.

Like Paswan, more than 88,000 people across the state are reaping profits through aquaculture. And this has been possible because of the state government’s decision to popularise commercial fishing. Starting 2007, the state fisheries department has launched a series of initiatives to attract individuals and communities with water bodies to aquaculture. The decision was taken because the state, which has a huge fish-eating population, imported bulk of its fish from Andhra Pradesh and other states. “Over 70 per cent of the state’s population eats fish. So we thought of popularising fishing in the state,” says Rajiv Kumar, director, Jharkhand fisheries department. The impact of the initiatives is visible. Jharkhand doubled its fish production to 106,430 tonnes between 2006-07 and 2014-15 (see ‘Scaling up’). It is expected to reach 120,000 by 2016. The state has also increased its capacity of fish seed production, which is in shortage in the country. Jharkhand doubled its fish seed industry to Rs 110-crore between 2007 and 2015. 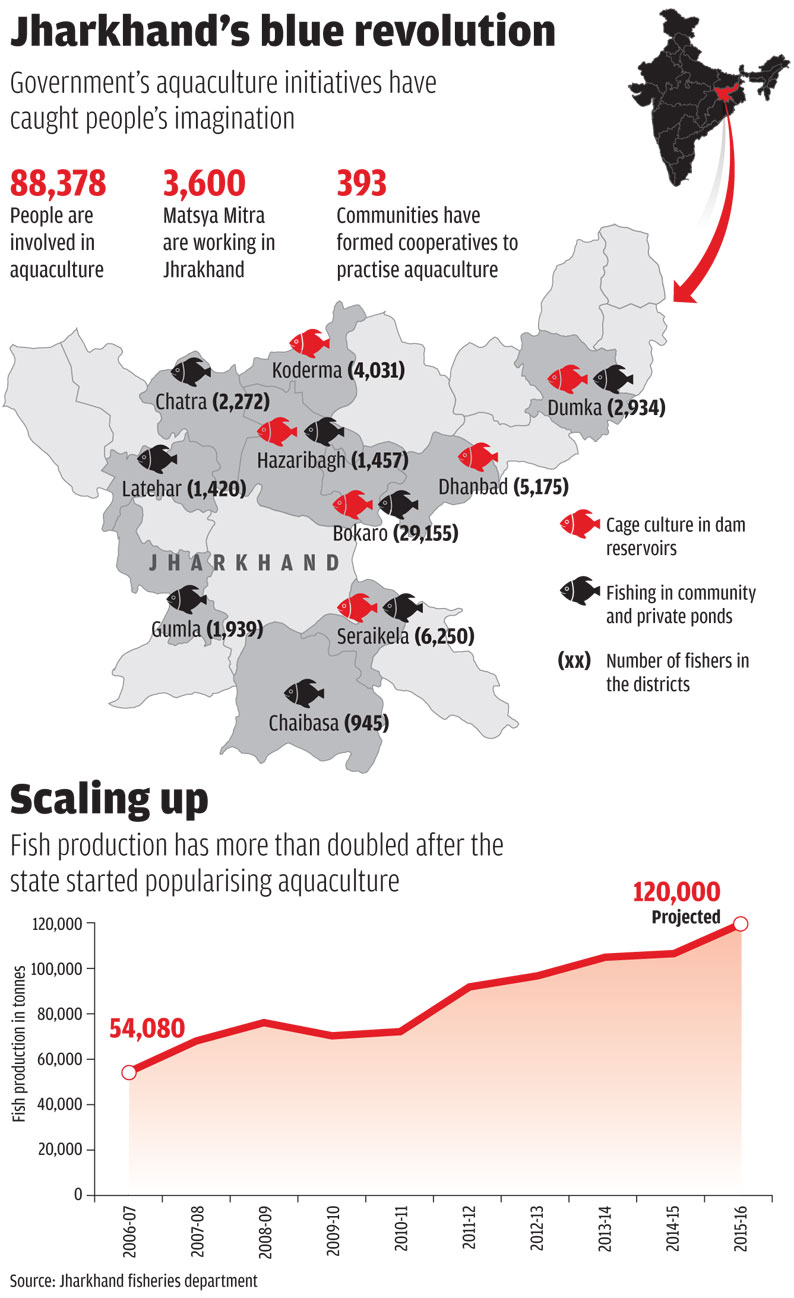 Growing with the people

“Involving local communities is one of the primary reasons behind the success,” says Kumar. He adds that Jharkhand, unlike neighbouring Bihar and West Bengal, has limited water bodies. And most of them are either privately owned or managed by communities; 85 per cent of the water tanks are privately owned.

With this in mind, the state launched the Matsya Mitra initiative in 2007 which invites village residents to join hands with the fisheries department and promote aquaculture. For aquaculture, it is necessary to know the pH scale and content of organic carbon in the pond water and the soil in the surrounding area. The initiative members, called Matsya Mitras, collect these vital information, and in case of an anomaly, instruct farmers to solve the problem. The state has over 3,600 Matsya Mitras who are now helping district fisheries officers in resource assessment, documentation of farming practices and in sourcing of support services. “They have also helped in identification of coal pits, small ponds and wells that are not being used for fish farming. Aquaculture activities have been started in several tanks because of the scheme,” says Kumar.

Nicolas Bando, Matsya Mitra from Sonse village in Chatara district, says he has sent at least 70 village residents to Ranchi for training. He earned around Rs 5 lakh in 2015 from selling seeds that he started rearing in 2014 after seeing a huge demand. Bando has now completely shifted to fish rearing in his four-hectare land that was earlier used for paddy.

While the Matsya Mitra scheme is for individuals, the state government has also started initiatives to involve communities in aquaculture. Officials say the initiative is aimed at community water bodies that are largely neglected because there is no sense of ownership. Under this, the government encourages residents to form a cooperative and do collective fishing. The government provides these cooperatives technical guidance and support in terms of vehicles to transport fish to the local market. According to state government data, 393 cooperative societies are engaged in fishing. One of the recent examples of this is the abandoned Bundu dam in Ranchi district. The 4.5-ha reservoir, which was completely covered with grass till November 2015, is today being used to commercially grow fish (see ‘Jharkhand’s blue revolution’,). 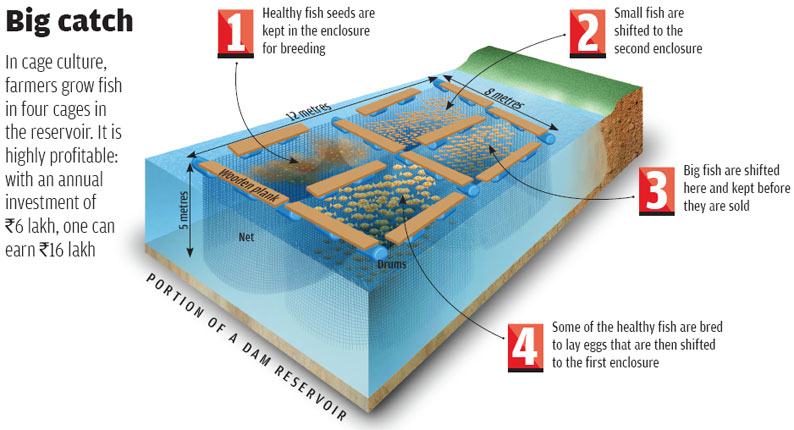 Encouraged by the success, Jharkhand government started the cage culture initiative in 2013 that involved communities around dams in aquaculture. The initiative has been implemented to take up water bodies that are traditionally not used for aquaculture. Under the initiative, small portions of a dam reservoir are allotted to individuals, such as Paswan, who grow fish in the cages submerged in the reservoirs. The cages are covered on all sides with nets that do not decompose in water. The state has over 3,000 cages in different reservoirs (see ‘Big catch’).

“Normally, an individual is given four small cages, together called a battery. The reason big water bodies such as reservoirs are not used for aquaculture is because one cannot restrict the movement of the fish. This method addresses the problem because the fish are trapped inside the cage,” says Dhanraj R Kapse, a fisheries department official in Seraikela district, where the initiative has been successful. He adds that the fish inside the cage are also protected from predators. Kapse says the initiative has not only increased fish production, but also helped in rehabilitation of the communities that were displaced by the construction of the dam in the 1970s. “Residents of the villages that were displaced by the Chandil dam have been demanding for compensation for a long time. In fact, some of the community members also joined ultra-left insurgents. Today, 116 villages around the dam are benefitting from the initiative,” say he. Kapse sums it up by saying that Jharkhand’s fishery story is a classic example of how government planning and people’ support can benefit the state.