6.5 per cent COVID-19 vaccines getting wasted in India; country not to pause Covishield inoculation

The proportion of Reverse Transcription Polymerase Chain Reaction (RT-PCR) tests in many of the 12 states showing a surge in novel coronavirus disease (COVID-19) cases, was less than 70 per cent of the total tests being conducted, Union health secretary Rajesh Bhushan said at a press conference March 17, 2021.

He urged all states, especially the ones showing a surge, to ramp up RT-PCR testing.

Himachal Pradesh also saw a surge but there too, RT-PCR tests accounted for only 50 per cent.

However, there were a few states where cases were going up in a very consistent manner despite the number of RT-PCR tests being high. Maharastra topped the list. The share of RT-PCR tests in the states was 89 per cent yet the positivity rate had climbed up to 6.8 per cent, as against 4.8 per cent last week. A positivity rate (number of samples tested positive out of total samples tested) above five per cent was a matter of serious concern.

In Karnataka, daily new cases had gone up to 751 this week, as compared to 538 last week, according to the ministry’s presentation. This was despite the fact that 93 per cent of all the tests in the state were RT-PCR ones.

RT-PCR tests are considered gold standard tests for testing the novel coronavirus SARS-CoV-2. The Indian Council of Medical research’s guidelines say that even if a person has tested negative on rapid antigen tests but is symptomatic, then s / he must undergo a repeat RT-PCR test.

Bhushan said a minimum of 70 per cent RT-PCR tests in all the states was a must considering the fact that there was no shortage of these kits now. Prime Minister Narendra Modi also stressed the same in his meeting with chief ministers March 17. The meeting was conducted to deliberate on ways to control rising COVID-19 cases.

However, when Down To Earth (DTE) asked as to how many states were conducting lesser number of these tests, Bhusan said the number was not immediately available.

VK Paul, member (health), Niti Ayog, said the surge in India is an ‘emerging second wave’. The government officials said there were 70 districts in 16 states where per cent change in new COVID-19 cases was more than 150 per cent.  In another 55 districts of 17 states, the change was between 100 per cent-150 per cent. Non-compliance of COVID-appropriate behaviour was driving the surge, the officials said. 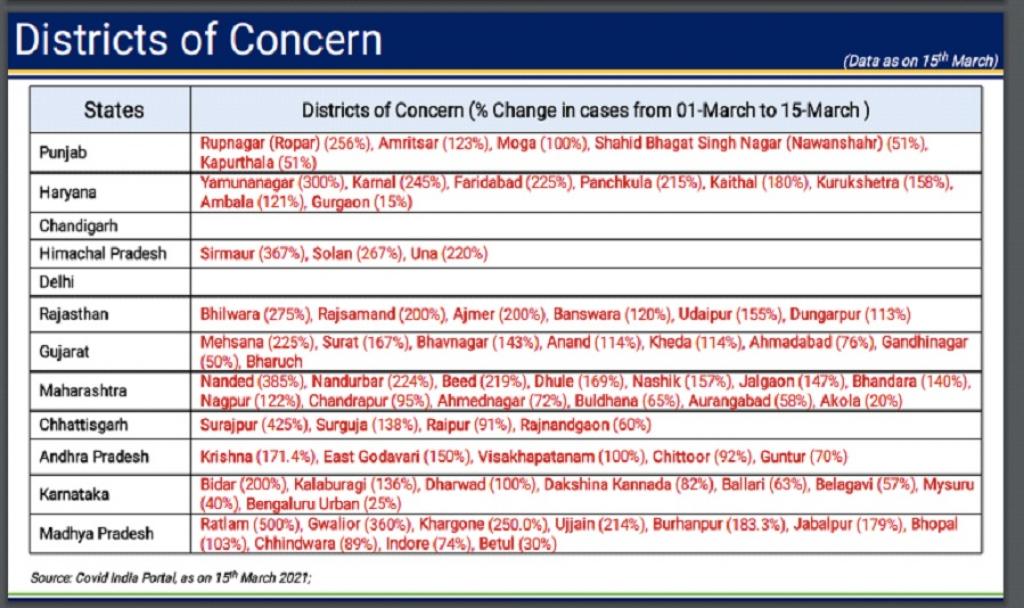 Were variants a matter of concern? Paul said this did not seem to be the case at the moment but was still being looked into. It is genome sequencing that helps find newer variants. The officials, however, parried the DTE query about how many samples had been sequenced since the Indian SARS-CoV-2 Genomics Consortium (INSACOG) was announced in December. As many as 10 Indian institutes are part of this consortium.

Bhushan was also asked about contact tracing. He said as the number of cases came down, contact tracing got reduced to immediate family members of the positive case. “For every positive case, 30 contacts, including vendors and other people the case came in contact with, should be traced,” Bhusan said.

Paul was queried about the vaccination drive using the AstraZeneca plc candidate being halted in 15 European countries. India had not reported any incident of blood clotting due to Covishield immunisation, Paul said. Covishield is manufactured by the Serum Institute of India, in collaboration with AstraZeneca. The World Health Organization also said March 16 that investigation into blood clotting events anywhere should continue; but since the benefits of the vaccine outweigh the risks, the drive must not be suspended.