There's an unhealthy alliance between doctors and pharma firms

It’s a clear case of self-regulation gone wrong. That some pharmaceutical companies give expensive gifts, distribute cash and pay for extravagant pleasure trips of doctors willing to push their products, is no news. What’s alarming is that there is no law to punish those guilty of the unethical practice; and the government refuses to blink. Result: patients are forced to buy costly medicines.

Companies ramp up drug prices to recover the amount spent on promotion. It was, therefore, no surprise when on January 8, 2019, KC Ramamurthy, Congress MP from Karnataka, demanded in the Rajya Sabha a list of firms accused of bribing doctors and the action taken against them. The government’s response was ambiguous.

Minister of State for Health and Family Welfare Ashwini Choubey said, “The Department of Pharmaceuticals (DoP) has received some complaints against some pharmaceutical companies on unethical marketing practices.” He conveniently ignored the first part of the question.

To seek clear-cut answers, Down To Earth (DTE) filed a Right to Information (RTI) application on January 23 this year and demanded from DoP, the nodal agency responsible for curbing such malpractices, names of the companies against whom complaints were filed since 2015 and the action taken against them.

In 2015, the government had notified the Uniform Code for Pharmaceutical Marketing Practices (UCPMP), crucial for an industry that until now had nothing to regulate it—neither a law nor any guidelines.

Reply to the RTI, dated February 14, revealed names of 20 firms charged with “bribing doctors, medical shopkeepers and unauthorised medical practitioners to sell their pharmaceutical products” in 2016.

The RTI reply did not reveal the erring doctors’ names. Asked what action was taken against the firms, DoP, which comes under the Ministry of Chemicals and Fertilizers, steered clear of owning up all responsibility and said it had forwarded the complaints to the Ministry of Health and Family Welfare (MoHFW), the Medical Council of India (MCI) and a pharma association.

It did not name the association. It also remained quiet on what action MoHFW or MCI had taken. For complaints made in 2015, it gave a general advisory to all firms to comply with UCPMP. 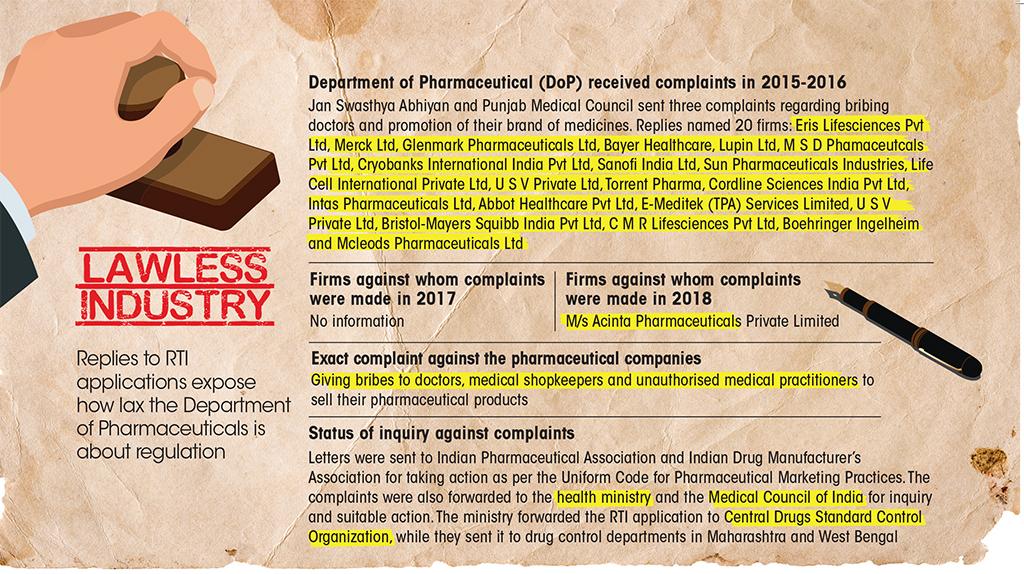 DTE then filed a first appeal to DoP, done when replies to an RTI application are incomplete, insufficient or unrelated. RTI application was also filed to MoHFW and three emails were sent to MCI, both asking what action was taken against the doctors. DoP’s reply, dated March 11, stated it had written to the Indian Pharmaceutical Association (IPA) to take action against all the firms charged with malpractice between 2015 and 2016, and to the Indian Drug Manufacturers’ Association (IDMA) to take action against Acinta Pharmaceuticals, accused of corruption in 2018. Ironically, this firm is not even a member of IDMA. DoP gave no information on the action taken against the other accused firms.

MoHFW replied on March 8 stating the ministry had forwarded the RTI application to Central Drugs Standard Control Organization (CDSCO) for action. CDSCO said, on April 12, it had forwarded the complaint to the Food and Drug Administration in Maharashtra and to the Directorate of Drugs Control in West Bengal, as that’s where the unethical sale happened.

MCI’s reply, dated April 19, shifted the responsibility back to MoHFW. The complaint made in 2015-16 against Eris Lifesciences Pvt Ltd is still “under consideration with the Ethics Committee of the Council.” It said the council had not taken action against firms as they “do not come under the purview of the council.

None of the replies DTE recieved gave names of the accused doctors. DoP said, “Consent of the applicant has been sought for providing the information”. It admitted that complaints against doctors had not been forwarded either to MoHFW or MCI.

The applicants, on the other hand, showed no reluctance in giving details. Amitava Guha, who works with Jan Swasthya Abhiyan (JSA), says in 2015 he had sent DoP copies of airline tickets that were booked by Sun Pharmaceuticals for nine doctors for round trips from Kolkata to Srinagar, and similar trips to Goa. He attached hotel bills paid by the firm and gave day-to-day schedule of doctors, which clearly showed the tours involved exploration of cities and had nothing to do with medical conferences.

His complaint also accused USV Limited of paying for a trip to Vancouver for 13 doctors, hotel bills of 258 doctors for attending a diabetes conference in Chennai, giving six doctors cash for a pleasure trip to Australia, and paying up to Rs 3 lakh each to 58 doctors. Macleod Pharmaceuticals gave cash to 23 doctors in Uttar Pradesh and 13 in Karnataka, while Abbott India gave money to 300 doctors, JSA had complained. The list is long.

Gurinder Grewal, who filed a complaint in 2015 against INTAS Pharmaceuticals Limited as the then chairperson of the Punjab Medical Council, suspects “the government is hand-in-glove with the pharma industry and therefore, does not want to expose the nexus between medical practitioners and pharmaceutical companies.”

When he failed to receive responses from DoP, M0HFW or MCI, on June 11, 2016, the Ludhiana-based doctor wrote to Nripendra Mishra, principal secretary to the Prime Minister, giving specific details of unethical practices. “The modality of this corruption is known but we have to ensure that regulatory measures are not seen as a retrograde step,” Mishra wrote back on June 26, 2016, and asked for suggestions on how to rectify the problem.

Grewal sent a five-page letter on July 16 suggesting a legal framework, more comprehensive than ucpmp. He is still awaiting a response.

UCPMP, no doubt, is a powerless mechanism to rein in rampant corruption. The voluntary code states that once a breach of the code has been established, the pharma association the firm is associated with can reprimand it, expel it from the association, demand a corrective statement in the media, or ask for the recovery of the gifts.

There is no mandatory or penal clause in the code. Expulsion from a pharma association is hardly a punishment as it neither stops the doctors nor the firm from carrying out their unscrupulous activities.

The government seems unclear about its stand on UCPMP. Replying to a question in the Lok Sabha on May 10, 2016, Union Minister of Parliamentary Affairs and Chemicals and Fertilizers, the late Ananth Kumar, had said, “The voluntary code was not working as expected.” But while replying to Ramamurthy's query in January, Choubey said all was well with UCPMP.

If all was well, why is the government in the process of enacting a law? A DoP official said on condition of anonymity that the department had prepared an order under the Essential Commodities Act to control unethical practices, but the law ministry pointed out flaws in it and returned it. Even the Indian Medical Association secretary, R V Asokan, says he has no information about UCPMP.

“Ethical practice can be enforced only through peer pressure. Legislation is no solution to the malady,” he says. MCI, however, does have the authority to cancel the license of corrupt doctors. But it has only doctors in its ethics committee. “MCI has been completely passive on the ethics dimension,” acknowledges the Parliamentary Standing Committee in a report presented in March 2016. “All over the world, it has been realised that the medical profession tends to protect its own flock.”

In the absence of a law, those who feel unprotected are the medical representatives. They get everyday targets to give pre-planned packages to doctors. “If a doctor avails privileges from a pharma firm, but does not prescribe its drug, the firm catches hold of us,” says Santanu Chatterjee, secretary, Federation of Medical and Sales Representatives’ Associations of India (FRMRAI). “We are forced to go to the doctor again so that the commitment is fulfilled. If we don’t meet targets and assure profits, our salaries can be withheld. We can be even sacked.”

McKinsey & Company, a US management consulting firm, states the Indian pharmaceuticals market is set to grow from $33 billion, according to India Brand Equity Foundation, to $55 billion by 2020 and become comparable with all developed markets other than the US, Japan and China. Small wonder, pharma firms completely ignore UCPMP and promote their products as a business. “The drug promoted the most becomes costliest,” says Chatterjee.

The gifts, however small, influence the physician, states a study conducted in 2013 by Roshni Narendran of the University of Wollongong, Australia, and M Narendranathan of the Kerala Institute of Medical Sciences, Thiruvananthapuram. When a physician listens to a drug salesperson and accepts gifts from the company, the doctor is under obligation to prescribe that drug, the study states.

An analysis by the Economic Times Intelligence Group shows 10 largest pharma firms had spent six per cent of their total sales between April 2003 and March 2004 on research and development. In contrast, these firms spent 290 per cent more on marketing.

Clearly, self-regulation has failed to police the interactions between the physician and the pharma firms. “We had given an alternate law which made regulatory obligations mandatory and not voluntary. It clearly gave penal provisions, from a fine of Rs 50,000 to Rs 20 lakhs and imprisonment depending upon the violation. If such measures are not adopted, this sector will never be regulated,” says Guha.