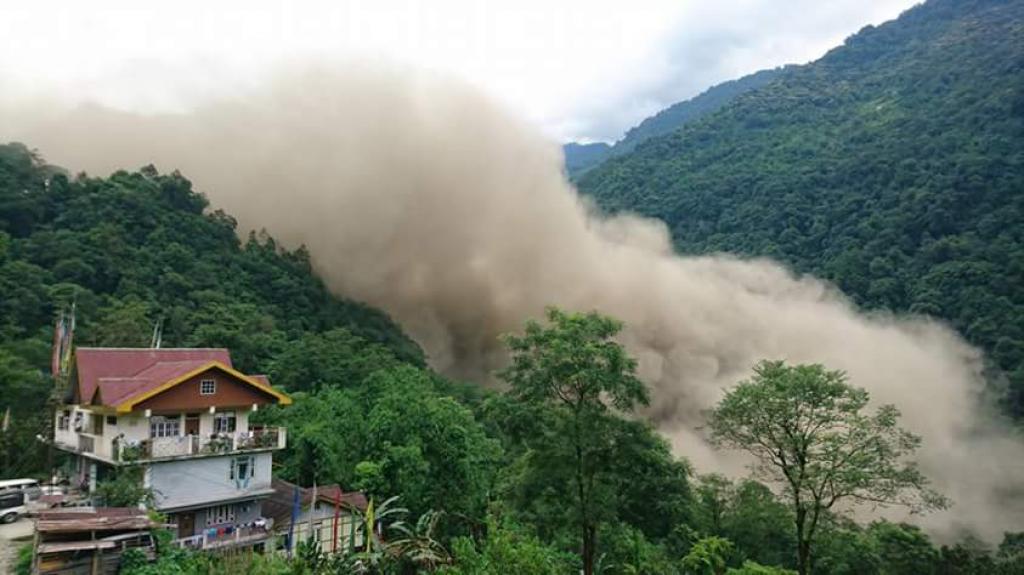 More than a week after a massive landslide in North Sikkim that blocked a tributary of the Teesta River, the High Court of Sikkim took a suo motu cognizance of the incident and filed a public interest litigation (PIL) on August 17. The High Court division bench of Acting Chief Justice Satish Kumar Agnihotri and Justice Meenakshi Madan Rai took cognizance of the various reports from civil society organisations and local media which have highlighted that Sikkim government was not prompt in providing relief to the affected villages.

The petition states: “The Judiciary is under an obligation to extend social justice to the people of the area and as such, we are of the considered opinion that the issue in respect of Dzongu Avalanche and consequential damage and loss to the people living therein be taken up by way of Suo Moto Writ Petition for consideration.”  The Division Bench issued notices to the Chief Secretary and District Magistrate (North) directing them to submit a status report “indicating the steps taken by them for relief and rehabilitation, extending necessary help to such people of that area (Upper Dzongu)”.

On August 13 at about 1:30 PM, a mountain, locally called Syok Bhir, collapsed which blocked the Kanaka River and dammed up a 3-km-long lake. The rising waters of this lake inundated Mantam village and snapped all road connectivity to all the villages across the Kanaka River. According to the Relief Commissioner of Sikkim Government, Tsegyal Tashi, a 65-metre-tall rectangular structure made out of mountain debris continues to block the river. “Due to continuing rainy season, waters have started flowing above the dam. We have initiated relief and rescue measures for the affected villages, especially Mantam, where a relief camp has been set up,” the official said.  Evacuations, according to the officials, have taken place in the low lying areas of Dikchu, Makha, Singtam, Rangpo, Teesta Bazaar and 29 Mile. 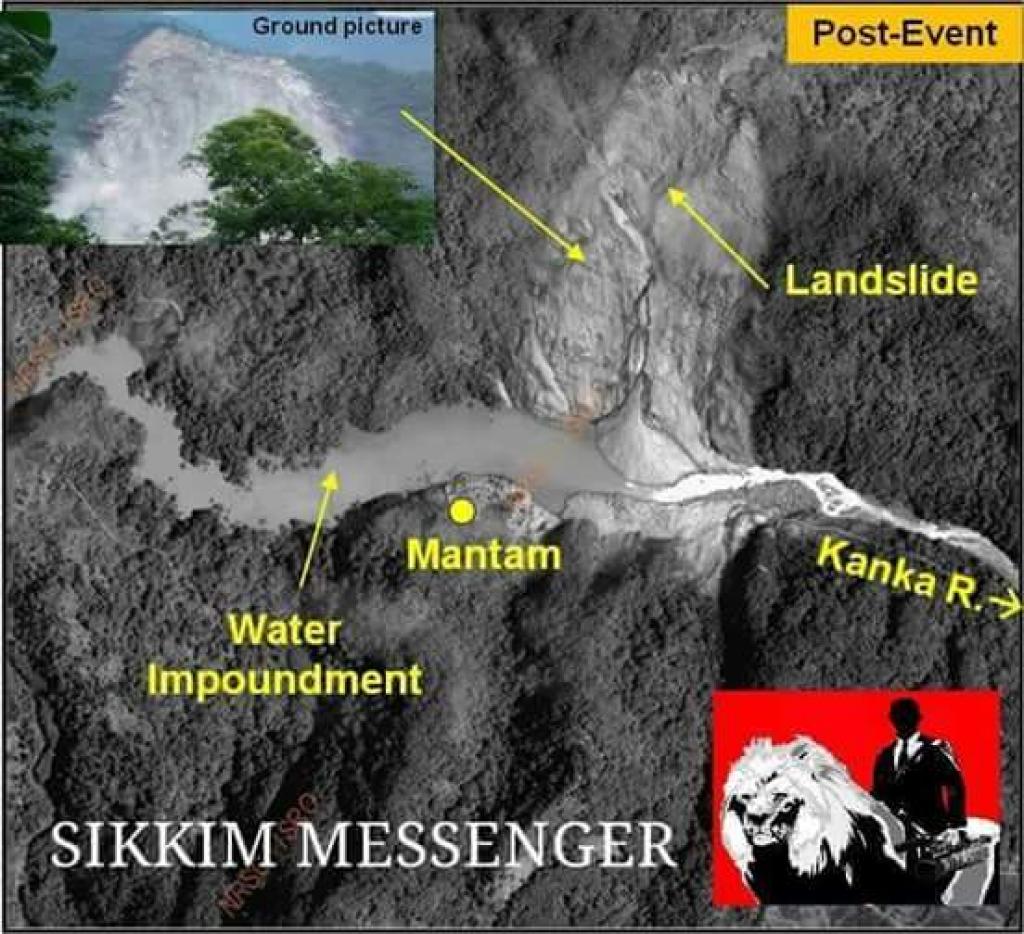 According to a bulletin prepared by National Remote Sensing Centre, the rising water level submerged the Kanka bridge and washed away about 300 metres of road that connects remote North Sikkim with rest of the country, while Mantam village was completely. “The villages of Tingvong, Laven, Kayeem, Lingzya, Bay, Sakyong Pentong and Ruklu Kayeem are cut off,” stated the bulletin. 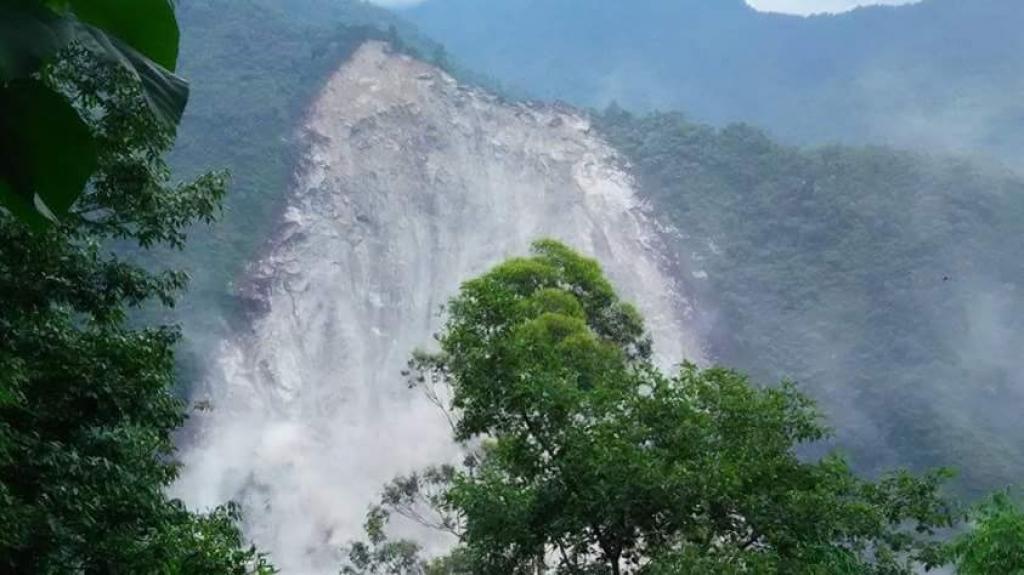 According to the latest update from the National Disaster Management Authority member R K Jain, 32 houses were totally damaged, 13 houses were totally submerged and connection of other parts of Upper Dzongu is cut off from the state capital in Gangtok. Jain has asked the state government to prepare for worst, if there is any sudden outburst of flood due to landslide dam breach and asked representative of Central Water Commission and Geological Survey of India to disseminate the analysis done by their organisation in a meeting held on August 18.

In the meeting, as reported by Jain, representative of CWC said that on the basis of analysis done, there will be 5 - 7m high flood in the downstream up to 20 km. Therefore, villages located in that range should be evacuated from lower catchment. A member of the National Hydroelectric Power Corporation said that Teesta Stage-V project of the NHPC is 25 km away from landslide dammed area and all precautionary measures will be taken up to avert flash flood downstream. On the other hand, representative of GSI said that landslide is quite stable and possibility of falling debris from slope is low.

What caused the landslide?

NRSC, which came out with an analysis on August 15, shows that the water impoundment has resulted in the formation of a 2.2-km-long and 209-m-wide artificial lake, north of Mantam. The width of the landslide is 530 metre in the middle and length is 790 metre.  The analysis further adds that the area has been witnessing severe landslides since the 2011 earthquake that shook the Himalayan region leading to the shearing of high quality rock formations—a geological process in which rocks break away from each other due to factors such as strains.

Incidentally, mountains in this region, according to the NRSC analysis, is situated in the Main Central Thrust (MCT), major geological fault where the Indian Plate has been pushed under the Eurasian Plate along the Himalayas, which has been hosting several earthquakes in the region.

The analysis concludes that groundwater seepages from the exposed joint planes visible in satellite imagery highlights “the role of the aquifer induced pore pressure (due to earlier monsoon rains) and escarpment [a long, steep slope, especially one at the edge of a plateau or separating areas of land at different heights] stress condition as evident from the presence of an old landslide could be probable causative factors for the landslide occurrence on August 13, 2016.”