Economic Survey 2018-19: Swachh Bharat needs to move to next level

Document declares that since toilets have been built, the focus will now shift to solid waste management

Swachh Bharat Mission (SBM) was a ‘complete success’, producing significant health benefits, and the focus now should be on solid waste management, according to the Economic Survey 2018-19.

Thirty states / Union territories had cent per cent coverage of household toilets, as of June14, 2019. Nearly 90 per cent of all SBM toilets have been geo-tagged, the Survey claimed.

The target was achieved due to community participation, flexibility in choice, capacity building, behaviour change, correct technology, use of information technology and social media, it added.

SBM, launched in 2014, was aligned with the 2030 global sustainable development agenda and the United Nations-mandated Sustainable Development Goals (SDGs), especially SDG 6.2 — access to equitable sanitation and hygiene for all and end open defecation.

More than 9.5 crore toilets have been constructed since October 2014, KV Subramaniam, the chief economic adviser to the Union government, said.

Swachh Bharat would now move towards Swasth, sundar Bharat, with health outcomes coming in due to this programme, he said.

The definition of Open Defecation Free (ODF) Status according to the report was restricted to:

a) No visible faeces found in the environment / village.

b) Every household as well as public/community institution(s) using safe technology option for disposal of faeces.

The effect was visible even in districts of extremely backward states from 2015. The government claim was supported by a recent Unicef study. It said there was considerable impact on combating contamination of water, soil and food post-SBM in the states of Odisha, Bihar and West Bengal.

The Survey used the study to state that on an average, every household in an ODF village saved about Rs 50,000 per year on account of lower likelihood of diseases (due to using a toilet; washing hands) and time saved.

Savings exceeded costs to household by an average 1.7 times over a decade when 100 per cent households have toilets, it findings claimed. The savings was 2.4 times for the poorest households. Factoring in proximity, health and time spent on cleaning and maintenance, the benefits were triple the costs.

Prevalance of diarrhea in ODF and Non-ODF areas in 2017 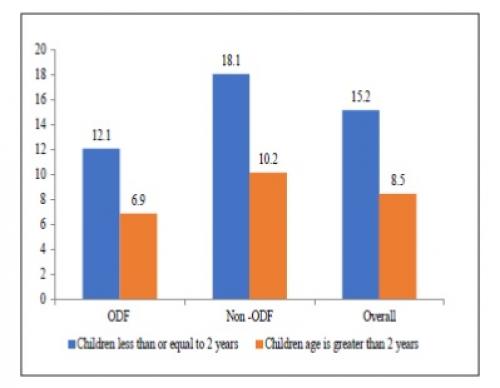 Costs in the study included investment and operational costs for toilet and hand-washing stations, including subsidies or resources provided by government or non state actors, as well as financial and non-financial costs to households.

“The majority of SBM interventions and their associated costs occur at community and household level. Approximately eight per cent of the national government’s overall contribution is allocated to social and behaviour change communication costs associated with programme delivery, while the remaining 92 per cent is required to be spent on incentivising household toilets and hand washing stations,” it said.

The Survey points to the construction of a huge number of toilets, which increased rapidly from 2014 to 2018 and also talked about the increase of construction from 50 lakh per year to three crore per year.

Fund utilization under SBM (in crores) 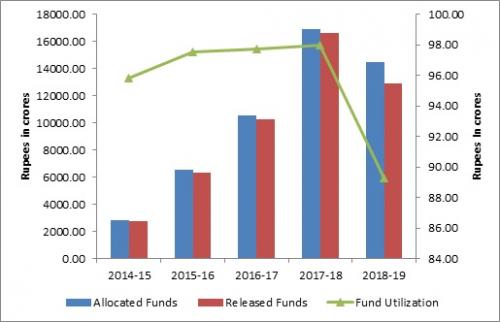 (With inputs from Shagun Kapil)