A new proposal for quantum entanglement between microorganisms

Tongcang Li from Purdue University, USA, and Zhang-qi Yin from Tsinghua University, China, have proposed a new method to teleport the internal quantum state (memory) of a microorganism 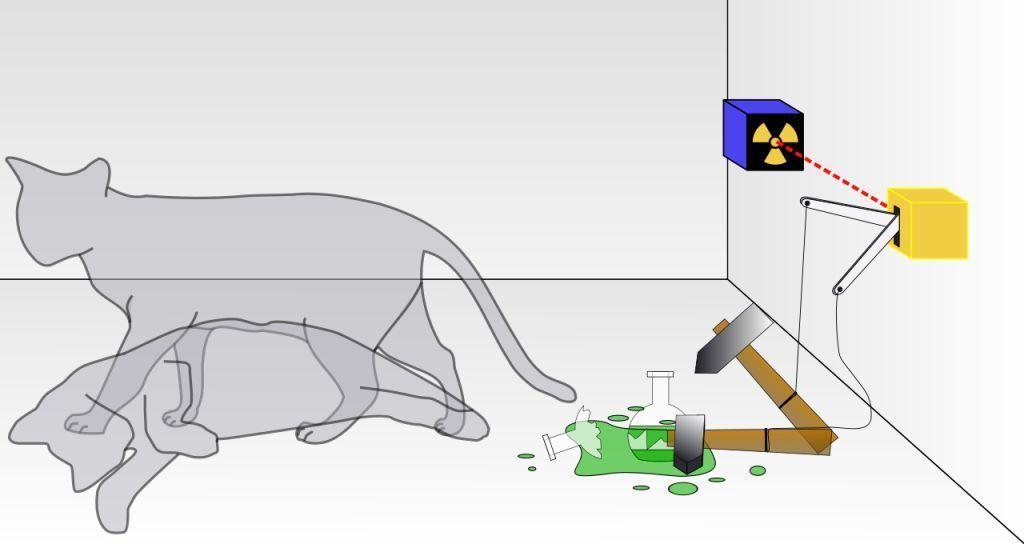 Lin and Yang also proposed a scheme to create a SchrÃ¶dinger's cat state for the microorganism in which it can be in two places at the same time. In quantum mechanics, Schrodinger's cat was a thought experiment in which a cat was imagined to be enclosed in a box, along with a radioactive source that would emit poison. The cat is assumed to be simultaneously dead and alive until the box is openedâ€”This is the premise of the quantum mechanical principle. Credit: Wikipedia

First things first. If you think this article is about how you can make an object disappear from point A and magically appear at point B ala Albus Dumbledore in Harry Potter and the Half-Blood Prince, you are mistaken. This has never been achieved for any particle/atom/ion, let alone a whole organism.

But information—well, that is another story.

Scientifically speaking, the quantum state of a photon/atom/ion has been entangled quantum mechanically with that of another photon/atom/ion in the past. If two particles are entangled, it means that we can determine the state of one particle if we know the state of the other. And "entanglement is a resource we can use to transmit information between different particles," according to Apoorva D Patel, professor at the Center for High Energy Physics at the Indian Institute of Science (IISc), Bangalore.

According to two scientists from the US and China, this could now be possible for a microorganism. Simply put, information can now be passed on from one microorganism to another using quantum entanglement.

Prof Tongcang Li from Purdue University, USA, and Dr Zhang-qi Yin from Tsinghua University, China, have proposed a new method to teleport the internal quantum state (memory) of a microorganism. The findings were reported in Science Bulletin.

The method is as follows:

Teleportation has made great strides since quantum entanglement was first proposed by Erwin Schrodinger in a letter to Einstein.

The state of a quantum system is described by a weight function, say Ψ. Let there be two systems 1 and 2 with respective sates Ψ1 and Ψ2. Let ϕ1 and ϕ2 be some different states for 1 and 2 (If 1 and 2 are quantum systems, they will exist in more than one state). Then, for the entangled system, the wave function would be

This entangled state can be realised by using different physical devices.

“It is basically about coupling two systems, that is, establishing a correlation between them. This correlation is what we call entanglement,” Patel said.

One device used to achieve entanglement is a combination of electromechanical oscillators and superconducting microwave circuits, as used by Li and Yin.

In this method, two electromechanical oscillators (aluminum membranes) are placed inside a microwave cavity made of a superconductor. A superconductor is used so that the electric field generated will remain stable for a long time. The field generated in one oscillator is transmitted to the other oscillator. This is how the two systems get coupled.

Another method used to entangle particles is nuclear magnetic resonance (NMR). In this method, the nuclear spins of a molecule are coupled with each other. "These spins act as quantum magnets and arise out of interaction between the electron clouds of different atoms in the molecule," said Anil Kumar, Professor at the NMR Research Centre at IISc Bangalore.

For light, it is achieved by passing a beam trough a non-linear medium such as a dielectric. The resultant beam and original beam will be quantum-mechanically entangled.

But the caveat stays: these are ways of transferring information, not entities.

"We cannot jump the gun at present. There could be several questions regarding the implementations of this proposal in real experiment. Quantum entanglement is as old as quantum mechanical theory itself. Several ideas are being floated because of the enormous possibilities of realisation of next generation communication using quantum states,” Agnikumar Vedeshwar, professor at the Department of Physics at DU, said.