"We leave as we came, and, God willing, we shall return, with peace and hope for all mankind." These were the closing words of Eugene Cernan on leaving the moon at the end of Apollo 17 mission. Cernan, the second American to walk in space and the last human to leave his footprints on moon, left earth forever on January 16. He was 82.

The world remembers him as the man who led Apollo 17, the final manned lunar landing. The mission established several records for manned space flight: the longest manned lunar landing flight (301 hours 51 minutes), largest lunar sample return (115kg) and longest time in lunar orbit (147 hours 48 minutes). During this space mission, his team took one of the most iconic photographs in space history, the full view of the Earth, known as The Blue Marble.

Captain Cernan flew three times in space and twice to the moon. But it was not easy to log 566 hours and 15 minutes in space (more than 73 hours on the surface of the moon). Spacewalks, in those times, were dangerous things. There was no certainty that an astronaut who ventured outside a spacecraft would be able to climb back inside again. 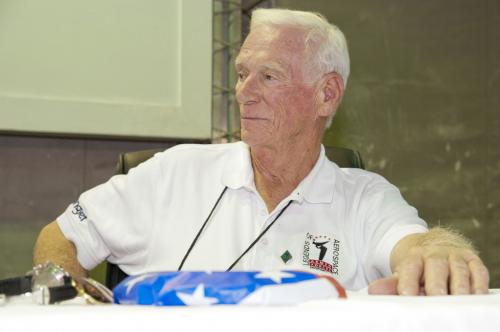 From breakdown in life-support systems to fogging up of visor and overheating of suit, the American astronaut and fighter pilot survived every jolt that came his way. He was among the first league of astronauts who learnt how difficult it is to maneuvre in zero gravity.

Cernan also authored the book, “The Last Man on the Moon”. His only regret, as reported widely, was not having appreciated those moments of glory, “I wish I could have pushed a pause button during those moonwalks the way we could in sims. They just went by too fast,” he had once said.

Apart from being inducted into the US Space Hall of Fame, Cernan was also awarded NASA’s first Ambassador of Exploration Award.

Even at the age of 82, Gene was passionate and hopeful about seeing the continued human exploration of space. “Too many years have passed for me to still be the last man to have left his footprints on the Moon. I believe with all my heart that somewhere out there is a young boy or girl with indomitable will and courage who will lift that dubious distinction from my shoulders and take us back where we belong. Let us give that dream a chance,” Cernan had wished.