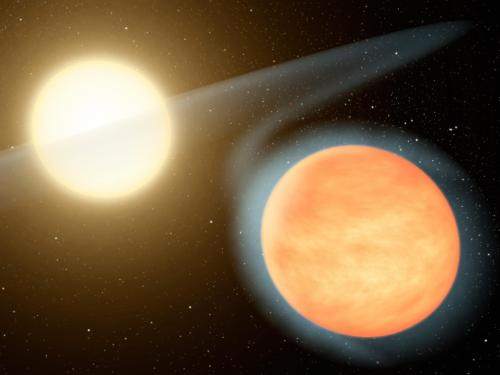 New research to be published in the Monthly Notices of the Royal Astronomical Society suggests planets in the early universe might have been carbon-rich, consisting of graphite, carbides, and diamond. Astronomers might find these diamond worlds by searching a rare class of stars.

This work shows that even stars with a tiny fraction of the carbon in our solar system can host planets," said Natalie Mashian, a graduate student at the Harvard University and lead author of the study. "We have good reason to believe that alien life will be carbon-based, like life on Earth, so this also bodes well for the possibility of life in the early universe," she added.

The primitive stars were mostly made of hydrogen and helium, and did not have heavier elements like carbon and oxygen, necessary for life. These elements were released when the previous generation of stars ended in supernova explosions.

Mashian and Avi Loeb, authors of the study, examined a particular class of old stars known as carbon-enhanced metal-poor (CEMP) stars. These stars contain only one hundred-thousandth as much iron as our Sun, meaning they formed before interstellar space had been widely seeded with heavy elements.

From a distance, it is difficult to see a difference between carbon planets and Earth-like worlds. Their masses and physical sizes would be similar. Only after the examination of their atmospheres, can the nature of the planet be found. Gases like carbon monoxide and methane would envelop the carbon-planets.

"This is a practical method for finding out how early planets may have formed in the infant universe," said Loeb.