With this, suspended animation may become ubiquitous in modern medicine sometime in the near future 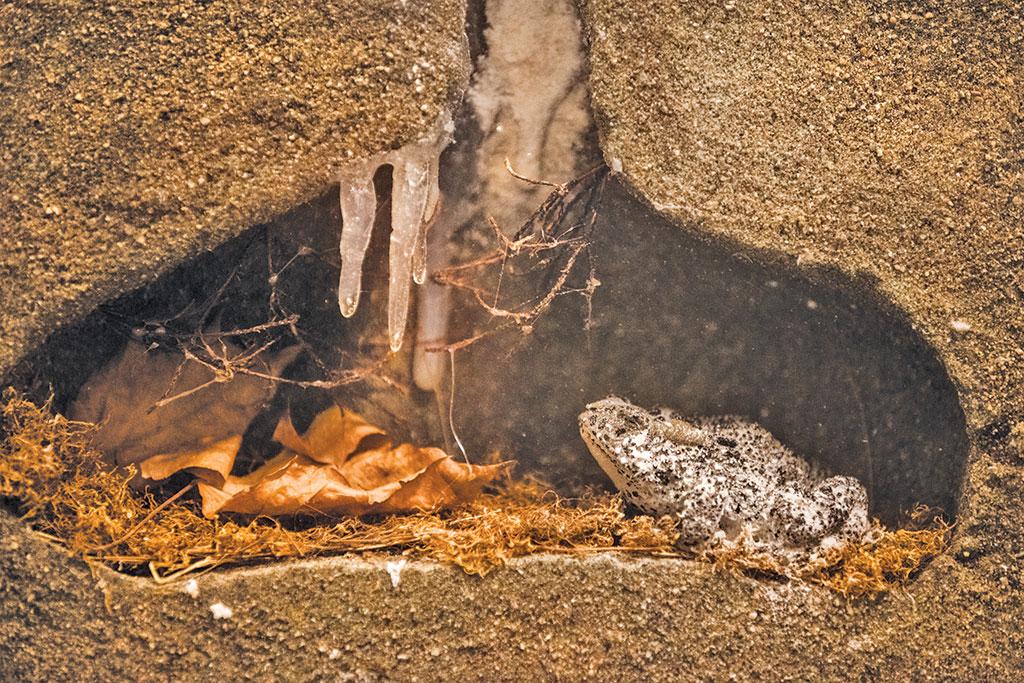 A hibernating frozen frog in its winter habitat

Several animals, including species of reptiles, insects, molluscs, avians and mammals have the ability to go into long periods of hibernation during which all activities—physical and physiological required to preserve life—are brought down to the bare minimum. The understanding is that these organisms go into periods of suspended animation to conserve energy to overcome seasonal shortages of food and harsh environmental conditions. The potential of hibernation in space travel brought the subject into public discourse recently and scientists now say that this suspended animation has the potential to become a game changer in the world of medicine.

Scientists have always been amazed that even after months of dormancy, hibernating animals wake completely healthy, even healthier than their pre-hibernation periods. Human body has been known to utilise periods of deep sleep for repair and rejuvenation of the body and researchers are today confident that hibernation is also such a similar reparative process. They suggest that humans may well possess all the hardware required to induce and mimic hibernation.

In 2010, a team led by Herbert Benson of Harvard Medical School and MS Malhotra from the medical commission of the Indian Olympic Association, published case reports of three Buddhist monks from the Rumtek Monastery in Sikkim having entered advanced meditative states in which their metabolic rates were reduced by up to 64 per cent.

In 2006, a Japanese citizen, Mitsutaka Uchikoshi, unwittingly became the first documented case of human hibernation. After suffering a broken pelvis in an accident in western Japan’s Mt Rokko, Uchikoshi survived outdoor in an unconscious state for 24 days before being discovered by a trekker. Uchikoshi survived and soon recovered fully.

Though academic interest in the subject started in the 1950s and 1960s, the scientific community soon lost interest as they could not make significant headway in replicating the process artificially. But over the years, cases of controlled metabolic rates in humans and freak incidents of hibernation-like events in humans have stoked interest once again. Armed with better technology, modern researchers are slowly chiseling out the process piece-by-piece and are discovering incredible potential not just to buy valuable time for tricky medical procedures, but also to develop novel technologies for therapy.

Though mild hypothermia and cooling have been used for long in medical science, latest research in hibernation has focussed on warm hibernators with whom humans have infinitely more in common than cold-blooded hibernators. “Torpor induces a kind of hypothermia that is undefended by the body, ” says Matteo Cerri of the University of Bologna, Italy, who is considered to be one of the foremost experts in the field. Unlike when a subject is exposed to a cold environment, a condition that triggers any sort of compensatory reaction, hibernators don’t try to compensate for the cooling, he says.

This reduces enormously the kind and severity of side effects related to hypothermia. Since torpor and hibernation are also characterised mainly by the suppression of metabolic rate, it is also possible to envision a “warm hibernation”, reducing metabolic rate without cooling.

“While processes have been broadly identified—metabolic suppression, immune suppression, blot clotting changes, cardiovascular and renal—little is known on the mechanistic side. Part of the changes maybe conferred simply by the reduced body temperature. Having said that, given the changes in gene expression profiles, which are similar across species, it is clear that hibernators prepare for this phase extensively. But details are lacking,” says Robert Henning of the University Medical Centre Groningen, the Netherlands, who is researching the secrets of hibernation.

Treatments in the offing

One of the key challenges that researchers have been working on is the mechanism which allows hibernating animals to slow down their blood circulation by reducing body temperatures yet never develop clots despite routinely being asleep for days or weeks. By comparison, humans are at risk of developing clots even when spending an exceptionally hard-working night in the office (even hours of immobility could lead to blood clots in humans).

In studies published in PLOS in 2014 and in Temperature in 2015, Henning’s team have described how hibernating animals regulate blood platelet production to beat the coagulating tendency of slow-moving blood. However, the team is yet to find how exactly this is achieved by the hibernator. If resolved, this will have far-reaching implications on success of treatments on wide range of conditions ranging from heart diseases, cancer to severe blood loss.

Researchers have also found a coping mechanism used by hibernating bears that could potentially yield a cure for both insulin and obesity in the future. They observed that hibernating bears ate up to twice their body weight in preparation for the hibernating season. During this process, the bear exhibited a normal response to insulin which prevented the breakdown of fatty tissues. But during hibernation, researchers found a drastic shift in this response as the cellular sensitivity to insulin drops. This allows the bears to break down the fatty tissue over in the hibernating season during which they neither eat, drink nor defecate. The bears resumed normal insulin functionality upon waking. The pathways involved in this response could hold the key to develop treatment for type-2 diabetes in which accumulation of fat induces resistance to insulin.

One of the most promising areas of research is in hibernation’s potential in stroke therapy and treatment of other neurodegenerative diseases such as Alzheimer’s disease in which synapses or the connections between nerve cells deteriorate. Hibernating animals have long known to possess neuroprotective qualities that enable their nerve cells to endure months of inactivity without withering. A team from National Institute of Neurological Disorders and Stroke in the US has isolated the molecule that is responsible for protecting nerve cells in the hibernating animal. In 2013, Cerri’s team discovered the specific region of the central nervous system in which inhibition of nervous pathways for cold defense responses induced suspended animation in rats.

As of now, commercial interest has mostly gravitated towards applications in organ transplants or targeted treatments. But as scientists are trying to find ways to induce hibernation, suspended animation may become ubiquitous in modern medicine sometime in the near future.