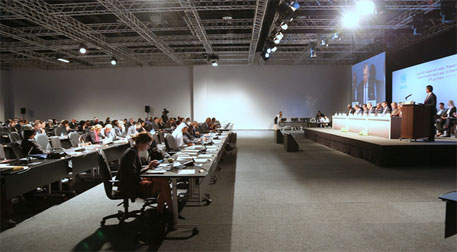 For the first time ever, wildlife crime has entered the agenda of the UN Crime Congress. The week-long congress, taking place in Doha in Qatar, aims to raise awareness about the importance of recognising illegal wildlife trade as a serious transnational organised crime.

The Doha Declaration, adopted at the 13th United Nations Congress on Crime Prevention and Criminal Justice, provides a strong basis for UN member states to put an end to the current high levels of illicit trafficking of wild fauna and flora, according to John E Scanlon, secretary-general of Convention on International Trade in Endangered Species of Wild Fauna and Flora (CITES).

“We now, for the first time, have the opportunity to draw the attention of this congress in its 60th year to the need to treat wildlife crime as a serious crime,” said Scanlon in his opening remarks. “Well-organised and well-resourced transnational organised crime groups are driving industrial scale illegal trade in wildlife. Combatting these groups requires wildlife crime to be recognised as a serious crime.”

The call for action to get serious about tackling wildlife crime includes the following recommendations:

Wildlife crime: status and global action
Each year, the number of elephants killed in Africa is in the range of 20,000 to 25,000 of a population of just 420,000 to 650,000, says the UN. According to the latest figures released by CITES MIKE programme in March 2015, the overall elephant poaching rates remained virtually unchanged last year when compared to 2013. The poaching rate still exceeds natural elephant population growth rates. This means a continued decline in elephant numbers overall is likely.

Rhino numbers are also significantly threatened and according to CITES, in 2014 alone, 1,215 rhinos were poached in South Africa (roughly one every eight hours). With the largest remaining population of the rhino, South Africa sees approximately 94 per cent of rhino poaching.

Other wild animals—particularly the lesser-known species—are also under threat from organised crime, say several reports. Pangolins are among the world's most trafficked mammals, with over one million animals taken from the wild in the past decade. Illicit traffic in live great apes is an increasingly serious threat to chimpanzees, gorillas, and bonobos in Africa and orangutans in Asia, with seizures averaging 1.3 per week since 2014, as per estimates.

In India, the trade of lesser-known species has also multiplied in the last few years and is now “uncontrolled”, says a Daily Mail report. According to recent TRAFFIC estimates, around 3,350 pangolins were poached in India between 2009 and 2013. Several cases were reported from the Northeast alone.

The Kasane Statement, adopted by countries at Botswana on March 25, 2015, builds upon the commitments in the London Declaration to eradicate the market for wildlife products, ensure effective legal frameworks and deterrents against wildlife crime, strengthen law enforcement, and support sustainable livelihoods.

UN is conducting a global study on wildlife crime and the findings will be published at the end of 2015, announced Fedotov at the UN Crime Congress in Doha.

Taking over from the Kasane Statement, the Doha Declaration is an effort to integrate wildlife crime prevention into the wider United Nations agenda to address social and economic challenges. But prevention and control of wildlife and forest crimes demands cooperation and commitment from nations—locally and globally.