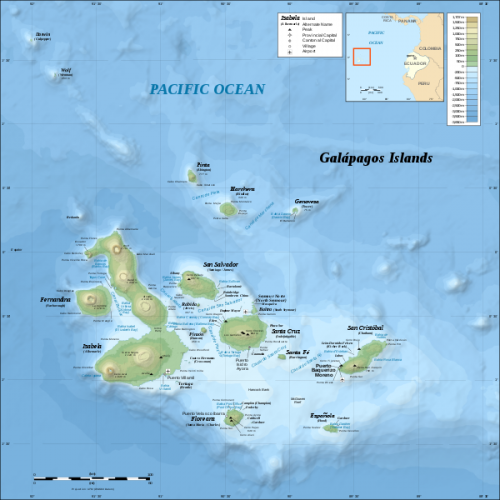 The La Cumbre volcano, located on Fernandina Island in the Galapagos archipelago off the coast of South America, has exploded

La Cumbre measures 1,476 metres (4,872 feet) and occupies almost the entire island. The eruption occurred on the northeastern sector of the volcano.

The 19 Galapagos Islands, a UNESCO heritage site, with their unique wildlife, inspired Charles Darwin’s theory of evolution following his 1835 visit. They lie 1,000 km from the coast of Ecuador in the Pacific Ocean.

According to UNESCO, “This archipelago and its immense marine reserve is known as the unique ‘living museum and showcase of evolution’. Its geographical location at the confluence of three ocean currents makes it one of the richest marine ecosystems in the world. Ongoing seismic and volcanic activity reflects the processes that formed the islands.”

The director of the Galapagos National Park (PNG), Jorge Carrion, has told AFP that there are no human settlements in the area of the archipelago where the eruption took place.

However, terrestrial and marine iguanas, endemic rodents, snakes, penguins, flightless cormorants and finches can be found on Fernandina, which is the youngest island of the archipelago.

“There are some species that could be affected, however, being a flow (of lava) that is in only one direction, on only one side of the island, the possible impacts that there would be would not have a significant impact on biodiversity,” assured Carrion.

“This is a natural process with which the species that inhabit that island have lived together throughout their lives and it would be wrong for us to intervene in these processes,” Carrion said, saying that there were no plans to evacuate the animals.