A rather ridiculous gap 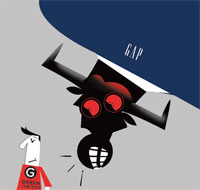 Trademark disputes are the humdrum of intellectual property (IP) litigation. Important, no doubt, for the parties involved but hardly the stuff to get you and me excited. What all we have missed in recent times? Dozens of cases, such as that of SABMiller India suing Som Distilleries and Breweries for infringing its bottle design and “passing off” (as the original) which went to two high courts before interim relief for trademark infringement was granted to the plaintiff. There were others which are not about infringement but why a trademark was not granted.

In the latter category is the long-running case of the Jaguar trademark which came to a close—or may be not—after 22 years. Swiss watch manufacturer Des Montres Jaguar had in 1991 applied for the Jaguar trademark for its watches. At the time, British luxury carmaker Jaguar Cars had opposed it, claiming that the Swiss company was intending to benefit from the reputation and goodwill attached to its trademark. The watch company’s argument was that it had been making and selling its Jaguar watches since 1945 and that the trademarks for both the products were recognised in over 20 countries. The Trademarks Registry had accepted its claim then but two weeks ago the Intellectual Property Appellate Board overturned the award on a petition filed by Tata Motors which is now the owner of the British car company.

The surprising case, however, is the one launched by Gap, one of the world’s largest clothing and accessories companies with estimated revenue of $15.56 billion in 2012, against a Delhi-based NGO, Swechha. It has sent a legal notice for trademark infringement to Green Gap Enviro Solution of Delhi for selling recycled and ‘upcycled’ accessories, stationery, home décor and gift items and clothing through their stores in Delhi and Mumbai under its Green The Gap (GTG) initiative. The NGO also has a web portal of the same name for selling these products. The San Francisco-based multinational says its Gap trademarks “enjoy a high degree of brand recognition which has been painstakingly built” since 1974. To emphasise this point, the notice says promotional and publicity for the Gap brands cost over half a million dollars in 2011.

The MNC says the NGO’s incorporation of Gap in their name constitutes a fraud as it “creates a misrepresentation and likelihood of deception amongst members of the public and trade”. That, indeed, is a serious charge but one that has taken the NGO completely by surprise. Vimlendu Jha, founder-director, says GTG was set up formally in 2008 as an extension of its Bridge the Gap initiative. That programme was launched by Swechha to enable schoolchildren and society in general to play an active role in combating environmental degradation.

GTG came about after Swechha encountered the rapidly increasing amount of waste in the capital and the “disconnect between people and what happens to their trash”. It reuses waste innovatively—most of its home décor products are made from discarded tyre tubes and the rest from juice cartons, rice sacks and discarded fabric—to create what Jha terms high-quality, useful products. GTG is India’s biggest green products aggregator and its website offers products made by other institutions as well. For all this, the NGO and Jha have received global recognition and awards.

The puzzle is why an MNC of Gap’s stature would bother with GTG. Does the name automatically recall the apparel giant? It’s a ticklish question since most customers of the NGO, one would presume, are aware of the origin of the goods they are buying. The logo that it uses is distinctive and in no way resembles that of Gap. And rather cuttingly, the NGO points out that the price at which Gap products are sold are so different from those charged by GTG that there could possibly be no confusion among consumers.

For the record, GTG has no registered trademark since its application made some eight months ago is still in process.

Is it a case of law firms here scouting for MNC business here as with ambulance-chasing lawyers in the US who make big money from filing compensation claims? Could the MNC have been misled about the nature of GTG’s business? These are questions doing the lawyer circuit in Delhi as they wait for developments. GTG is not backing down and is determined to fight the case. The NGO’s point is that over the past four years it too has invested considerable resources in promoting the name and logo and any modification of the GTG mark would lead to loss of goodwill (touché, Gap) that it has built up for their unique initiative. Besides, it would create hardship, not just to themselves but to the poor craftsmen who are employed to make these products.

Oddly enough, one of the leading law firms in the capital that is known for its top flight corporate clients has offered to fight GTG’s case pro bono.