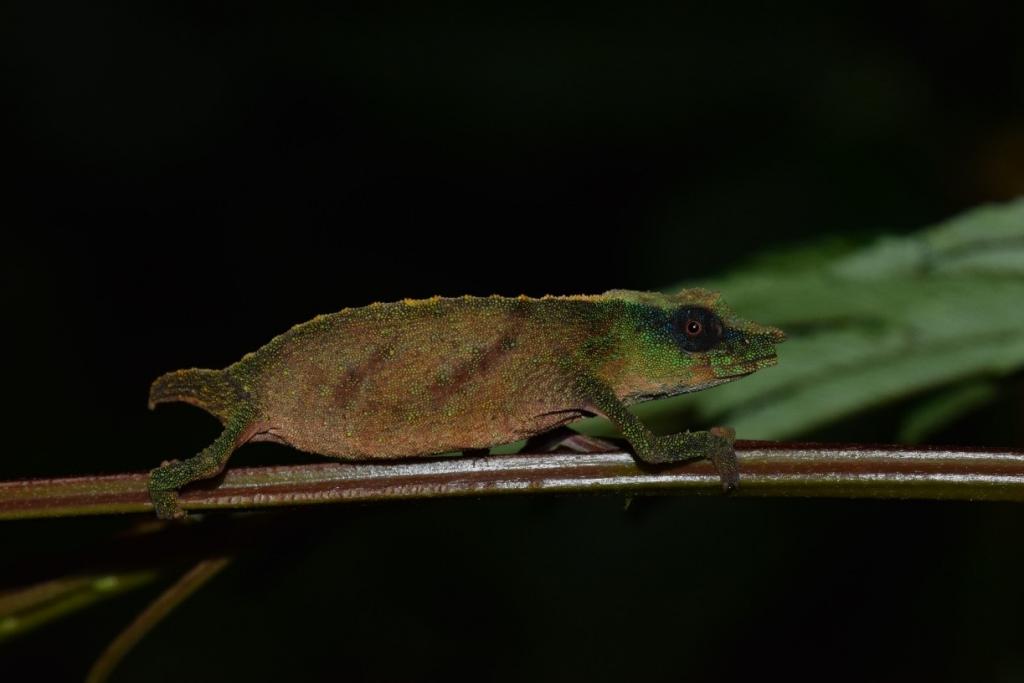 Chameleons occur almost exclusively on mainland Africa and the nearby island of Madagascar and most species inhabit rainforests. Because these rainforests are naturally fragmented by the more arid savanna vegetation types, forest-living chameleons have been naturally isolated from each other for millions of years.

This isolation has resulted in many populations evolving into distinct species that are highly adapted to forest life. They cannot survive anywhere else. These forest adapted chameleons are doomed if their forests disappear.

Unfortunately, this is what’s happening for many species. Nearly 40 per cent of 218 chameleon species are threatened with extinction, with another 19 per cent considered near-threatened.

The reason for this is clear — forests are being removed through uncontrolled slash and burn clearing, primarily for agriculture. One of the chameleon species facing extinction is the tiny, forest-living Chapman’s pygmy chameleon (Rhampholeon chapmanorum) from the Malawi Hills in southern Malawi.

Forests, particularly rainforests, are home to hundreds of thousands, perhaps millions, of species that are uniquely and sometimes strangely adapted to that habitat. Indeed, these species are a fundamental part of the forest ecosystem, including the little Chapman’s chameleon.

The decline of forest creatures like this chameleon is an unquestionable warning sign that forests are losing integrity. This is worrying because forests contribute significantly to regulation of the Earth’s air, water and climate. By clearing forests, we are altering our atmosphere and weather.

When we checked historical satellite imagery covering the Malawi Hills, it became clear that most of the rainforest had been destroyed by slash and burn clearing. We could see that a once larger forest had been reduced to small, isolated patches.

The former forest had been converted to agriculture. Given that Chapman’s chameleon, which only occurs in the forest at Malawi Hills, had last been seen by scientists in the 1990s, we were unsure if these patches still had populations of chameleons or if this species had already gone extinct.

So in 2016, we travelled to Malawi Hills to survey the forest patches for Chapman’s chameleon. This small chameleon (5–6 cm in length) forages for invertebrates on the forest floor by day where it perfectly blends in with the leaf litter.

By night, it climbs into bushes and small trees where it sleeps, perched on a branch or leaf. To find these chameleons, we set about walking forest trails at night, hoping to spot sleeping chameleons given that they are easily visible in the bushes by torchlight.

Much to our relief, Chapman’s chameleon has not yet gone extinct. We found that these chameleons cling to survival in four tiny forest patches, ranging in size from about 1 ha (0.01 km²) to 17 ha (0.17 km²).

The chameleons are still fairly abundant in these tiny patches, but we found that they don’t occur outside the forest in the surrounding agricultural fields or in the degraded edges of forest. So everywhere that forest has been lost to agriculture translates to a population decline for this species.

From a detailed look at the historical and current satellite imagery, we estimated that 80 per cent of the rainforest at Malawi Hills has been destroyed since the 1980s. This roughly translates to an 80 per cent decline for the chameleon population.

Through DNA sequencing, we also assessed the level of genetic diversity for Chapman’s chameleon and this appears to be at normal levels. This means that the species still has enough genetic variety, should it need to slowly adapt to naturally shifting environmental conditions.

Unfortunately, we also found that the populations in the isolated forest patches are “genetically disconnected”. This is because the chameleons cannot cross between forest patches to interbreed. So the natural flow of genes through the population has been halted and without this, all the little populations will eventually become inbred and genetic diversity will be decreased. This process takes several generations.

The loss of genetic diversity is a serious concern because inbred populations are at greater risk of extinction as they have lower survival and reproductive fitness and tend to not be able to adapt to changing conditions. The natural resiliency of the population will slowly and inevitably be lost.

Even in the face of wholesale destruction of natural habitat across the globe, forest loss is of particular concern because intact forests are essential to maintain the delicate balance of Earth’s air, water and climate.

Yet, global habitat destruction and biodiversity loss is accelerating as the human population size increases and the consequences are now being felt. Droughts, rapid global warming, glacial melting, sea level rise and the sixth mass extinction are present-day realities.

Similarly, spillover events such as that which caused the COVID-19 pandemic are becoming more frequent because increased human population density results in increased probability of transmission from species that are viral reservoirs. Science has been speaking loudly on all these issues for decades, but society has not been listening.

Unless the underlying issue of population growth can be addressed, these challenges will continue regardless of the recent strong discourse on issues such as climate change or microplastic contamination. Chapman’s chameleon, as well as the multitude other species across the globe that are in danger, have been loudly warning all along. Their declines signal humanity’s own decline.