Dragon fruit: Is it the next big thing in Indian horticulture

The dragon fruit, which is indigenous to the Americas, can grow in arid and semi-arid regions with very low input cost

The dragon fruit (Hylocereus undatus) is indigenous to the Americas. Its name comes from its appearance — leather-like skin and scaly spikes on the exterior of the fruits. It is also known as ‘Pitaya’, ‘Pitahaya’, strawberry pear, noblewoman and queen of the night throughout the world.

The dragon fruit was introduced to home gardens in India in the 1990s. It gained wider popularity among farmers due to its profitability and the fact that it needed lower inputs once established. The plant sustains yield for more than 20 years, is high in nutraceutical properties and good for value-added processing industries.

The low maintenance and high profitability of dragon fruits has attracted the farming community throughout India. This has led to a steep increase in dragon fruit cultivation in Maharashtra, Karnataka, Andhra Pradesh, West Bengal, Telangana, Tamil Nadu, Odisha, Gujarat and the Andaman and Nicobar Islands, as well as in many north eastern states.

A recent estimate by Indian Council of Agricultural Research-National Institute of Abiotic Stress Management, Baramati in Maharashtra found that dragon fruits are cultivated on 3,000-4,000 hectares in various states of India. The country produces approximately 12,000 tonnes of the fruit every year.

The fruit can be exported to Persian Gulf countries, the European Union and the United States. In June 2021, India exported its first consignment of dragon fruit from a farmer of Maharashtra to Dubai in the United Arab Emirates.

The dragon fruit plant is a member of the cacti family. It is hardy and grows in diverse climatic conditions with varied soils, especially in the semi-arid and arid regions of India. It prefers slightly acidic soil and can tolerate some salts in soil too.

Dragon fruit is a fast-growing, semi-epiphytic vine that requires vertical pole-like support with a ring at the top. The economic lifespan of dragon fruit is more than 20 years and during the full-bearing period, plants are laden with fruits. It thus requires very strong and durable supporting structures.

Reinforced cement concrete (RCC) cast poles, two metres in height, with a square / rectangular plate at the top are used to support the plants. This requires a higher initial investment cost of Rs 300,000-400,000 per acre, which further hinders its adoption.

In addition to this, drip irrigation also adds cost to the initial investment. The structure of RCC poles can be erected at various spacings such as 2.5 × 2 metres, 3 × 1.5 metres, 3 × 3 metres and 4 × 3 metres. Optimum spacing aids free air circulation and light penetration and reduces the spread of disease and pests.

Flowering and fruiting of dragon fruits coincide with the monsoon season in India. Its flowers are hermaphrodites (male and female organs in the same flower) in nature and open at night. Nocturnal agents such as bats and hawk moths act as pollinators.

Proper pollination ensures the fruit setting, size and total yield. Usually, flowering and fruiting occurs in a series of flushes and normally in three to five segments (staggered) from June to November.

Fruits are ready to be harvested 30-35 days after flowering. Each fruit weighs around 200 to 700 grams, depending on management practices. In well-managed orchards, economic fruit yields start after three years and the average yield can be up to five tonnes per acre.

The fruits are in high demand in metropolitan cities due to their nutritive value. The rates of fruits vary from Rs 50 to Rs 120 per kg in the Mumbai, Pune and Surat markets. Retailers sell fruits at Rs 60-Rs 100 per piece in the local market.

Rates in the market are highly variable and mainly depend on fruit size and pulp colour. Dragon fruit requires very little attention for pests and diseases, hence farmers are showing more interest in it. 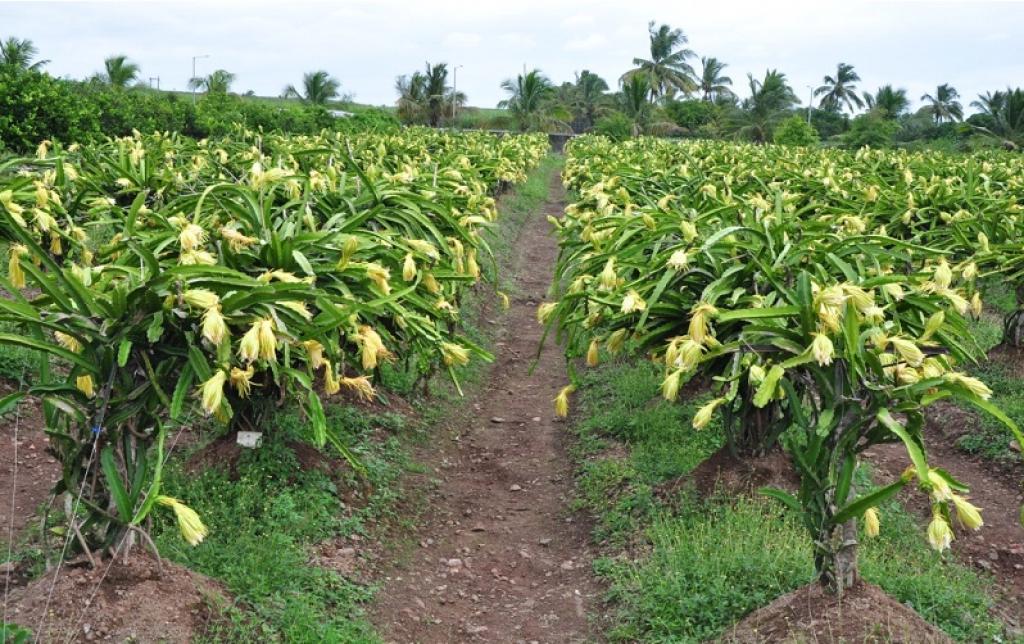 Generally, sunburn is a common problem in semi-arid and arid tracts and it can be managed by providing 25-30 per cent shade either by planting shade-providing trees (such as moringa, sesbania and Melia dubia) or installing artificial shade nets during the harsh summer months.

In the Baramati region of Maharashtra, farmers are integrating moringa (Odyssey or PKM 1 variety) at a density of 100-120 trees per acre in the dragon fruit orchard. This not only helps to reduce sunburn but also augments income due to the sale of moringa pods during February-May. But high density planting of shade trees in dragon fruit orchards may also invite pest and disease issues due to high humidity and less air circulation.

To encash on the popularity of the dragon fruit, many farmers and stakeholders have jumped into the nursery business and are selling cuttings at the rate of Rs. 30 to 80 per plant. As of today, the Government of Maharashtra has taken the initiative to promote dragon fruit cultivation in different areas of the state by providing good quality planting material and subsidies for its cultivation through the Mission on Integrated Development of Horticulture.

An increase in the area under cultivation and production of the dragon fruit will make India self-reliant by reducing imports. It is a fruit that is affordable and nutritious for the poor and adds to the income of the farmer.

The authors are with the ICAR-National Institute of Abiotic Stress Management, Baramati (Pune), Maharashtra