In Mysuru's HD Kotte, farmers in distress over falling yield

Changing rainfall pattern, excessive use of fertilisers and pesticides have made farming unsustainable

“We work on other farms despite owning land,” said Lakshmi (42), an agricultural labourer and member of the Jenu Kuruva tribe of the Heggadadevanna Kotte (HD) taluk in Mysuru district, Karnataka.

Lakshmi is the daughter of a landowner, who grew crops on land allotted by the state government. Hers was among several tribal families who were displaced from Mysuru's Sargur town, following construction of Kabini dam in 1974 and were allotted land.

At 17, Lakshmi was married off to a landowner from her tribe in her village Gandathur. The couple grew ragi and cotton and earned enough to educate their children, two of whom have passed class X and are pursuing higher studies in Bengaluru.

However, of late, changing rainfall patterns, excessive use of fertilisers and pesticides and continuous animal encroachment have made farming unsustainable. Without any subsidies such as pumps and flood control systems, farmers in the village are heavily dependent on rainfall.

“We cultivate ragi during monsoon, but cannot be sure of a good yield as rainfall is unpredictable. So, we work on farms in nearby villages such as Machu, where irrigation facilities are better, to make ends meet,” Lakshmi said.

She added that women are paid Rs 200 a day for work, while men, including her husband, get Rs 500. 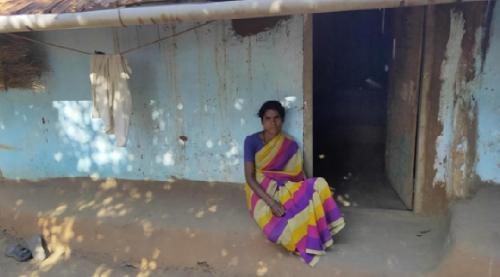 Lakshmi is now an agricultural labourer on a farm in Machur. Photo: Nimitt Dixit

In the nearby village of Balleadi, Shivanna TD, managed to procure irrigation pumps. His father was allotted three acres of land after rehabilitation.

However, he claimed that dynamics of inheritance and land allotment break his attempt at economic mobility.

“My father’s land has been divided among his six sons and we all are left with half an acre each. This is not enough to sustain my family of four,” said Shivanna.

To house the displaced, the Karnataka government converted a large tract of forest land from the Nagarhole forest into farmland and residential hamlets. While the scheme appeared to be a long-term solution at the outset, it became a cause of concern for reasons more than one.

First, unless more forest land is converted into agricultural land, land left for purchase is significantly less. Even if there is land, the scheme allows allotment to those who do not possess any.

This means that second and third-generation immigrants like Shivanna are stuck with the land reduced significantly by the laws of inheritance.

Second, the allotted land is non-alienable, which means that farmers cannot sell their land without government permission.

Shivanna said: “I sought government permission to sell my half-acre land to buyers from Kerala. It has been five years but I haven’t got the permission to do so.”

Shivanna wants to sell the land as soon as possible and start a small provision store in a nearby district.

As farming took a hit, many resorted to unofficially leasing/mortgaging land to farmers from Kerala to grow cash crops such as ginger and tobacco. These ‘shifting farmers’ are unburdened by the long-term vision of owning land and cultivating crops that consume heavy doses of pesticides and fertilisers to produce higher yields.

“The practice of using chemicals in the soil has intensified and our land is no longer arable. We also need to work as de-weeders, cotton pluckers and cleaners in other farms to feed our children,” said Doddamata J, who has been unofficially leasing out her farmlands to ginger farmers for the last 10 years.

Meanwhile, government officials continue to bank on providing pesticides and fertilisers, at almost no cost, to farmers and speak of schemes to increase irrigation efficiency such as the ‘Surya Raith Scheme’ that seeks to replace irrigation pumps with solar-powered pumps.

However, land continues to grow infertile and with changing rainfall patterns, more and more farmers are spiralling into an agro-crisis.