Modi also waxed eloquent about as the benefits of neem-coated urea-this could explain the barely concealed boredom of the invitees at the Red Fort -and enhanced crop insurance. There were also homilies on how farmers could save water, save energy and save fertilisers.

The grand proclamation on the name change has been met with stunning silence from the farming community. In any case, what could they have said? Thank you for another sop? We are thrilled that this government has offered us more old baubles in new wrapping? Farmers obviously would have seen through this empty rhetoric since they have been using neem-coated urea for over a decade. For the rest of us who have not tumbled to the not-so-clever spin of the Bharatiya Janata Party (BJP) government, here are some hard truths. Let’s start with the neem-coated urea that has captured the Prime Minister’s imagination. It is not a new initiative to boost the sharply eroding fertility of India’s agricultural lands as his government claims. According to Fact Checker, a data website, urea, as also some pesticides, has been coated with neem for 11 years! The website mined parliamentary answers to show that in August 2011, the production of such urea had been upped from 20 per cent to 35 per cent. 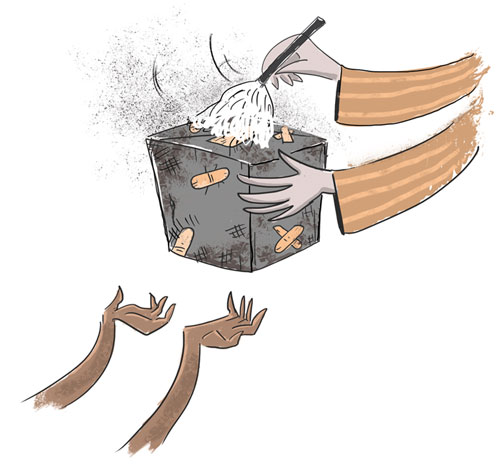 Ditto for the much vaunted Pradhan Mantri Krishi Sinchai Yojana (PMKSY) that Modi claims as another pioneering initiative to ensure universal access to irrigation. This is merely a new avatar of the Accelerated Irrigation Benefits Programme launched during the 11th Five Year Plan to infuse funds into languishing irrigation projects. During this period, the Union government allocated Rs 67,477 crore to the states to create irrigation potential for 9.4 million hectares. The Modi government’s sleight of hand while claiming PMKSY as a new initiative is that funds for creating additional irrigation infrastructure are actually being lopped with just Rs 1,800 crore set aside for the current year.

Changing names is an old ploy of politicians and political parties but this government has turned it into a fine art. That it gets away with brazen claims is because the media fails to call Modi’s bluff and also ignores the opposition when it exposes such facts. No one is saying that the agrarian crisis is a creation of the BJP regime; it has been a cancer that has been allowed to spread by all governments. What is irksome to the farmers is that their most worrying concerns are being brushed aside by a party that promised to make these challenges its priority. Almost every farmer’s organisation has camped in Delhi over the past year to seek relief-an unparalleled protest in recent years-to nudge the PM into action. This hasn’t happened; instead, farmers are being fobbed off with a ridiculous sop.

If the renamed ministry means business, it could delve into the many reports on the persistent agrarian distress. The most insightful of these were produced by the National Commission on Farmers, chaired by M S Swaminathan, the well-known agriculture scientist. It detailed the reasons why farmers were committing suicide in droves.

Suicide figures, however, have dropped dramatically all of a sudden. According to the National Crime Records Bureau figures, the number of farmers who took their lives in 2014 was halved to 5,600 compared with 11,700 in 2013. So did the BJP do something magical to end farmer despair? It changed the methodology of calculating farmer suicides.