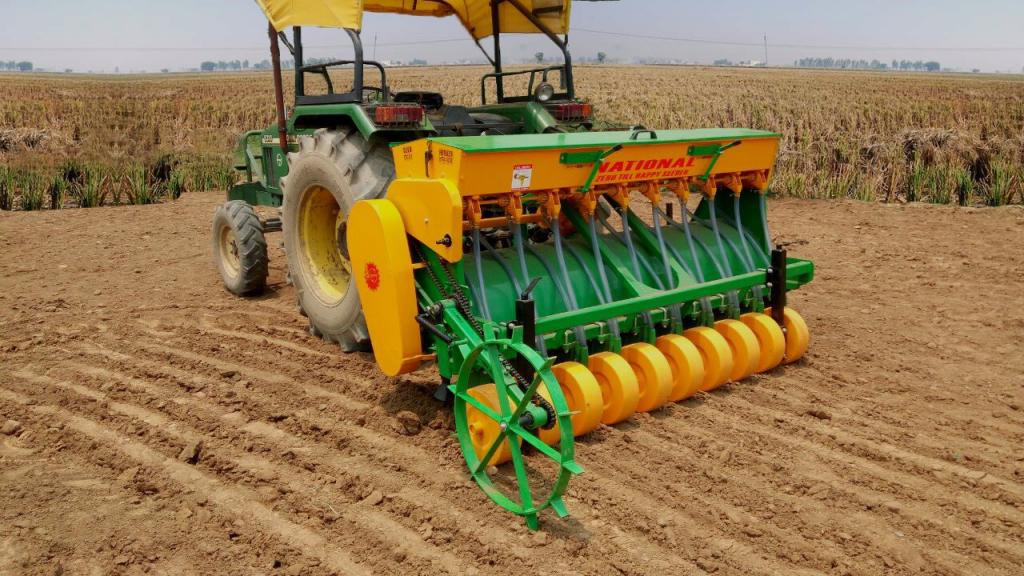 The dense smog that covers vast swathes of North India during the winter months owes a significant amount of its spread to the menace of stubble burning in the fields of Punjab, Haryana and western Uttar Pradesh. It can be reduced by fusing cutting-edge science of conservation agriculture with the invaluable experience of the hardworking Indian farmer.

An undesirable consequence of the otherwise profitable rice-wheat sequential cultivation system is the short, fallow period of two-three weeks from mid-October to mid-November, available to the farmers.

In this limited period, they have to both harvest the paddy crop and prepare the soil to sow the wheat seeds. The farmers, thus, take to burning the rice crop residue.

As a result, about 12 million tonnes of paddy straw get burned annually, causing not just staggering environmental pollution but also robbing the soil of beneficial nutrients present in the stubble, thereby reducing its fertility over time.

Several Indian and international organisations already have been at the forefront of developing and evaluating technologies that can prove to be effective alternatives to crop residue burning.

Organisations such as the Indian Council of Agricultural Research (ICAR), the Punjab Agricultural University, International Maize and Wheat Improvement Centre (CIMMYT) and Borlaug Institute for South Asia have dedicated many years of research to come up with technologies that can manage crop residue on farmers’ fields, yielding multiple benefits for farmers and making the air breathable again.

The Happy Seeder — a machine that cuts and lifts the paddy straw while simultaneously sowing the wheat crop and spreading the cut straw as mulch over fields — is a solution all these renowned institutions have lent their names to. These research organisations have rigorously evaluated the Happy Seeder, both individually and in collaborations, by conducting field trials with farmers over several years.

A paper titled Fields on fire: Alternatives to crop residue burning in India published in the prestigious journal Science, has studied 10 kinds of farming practices dealing with crop residues, including the burn option. The researchers found that working with the Happy Seeder is not just the least polluting but also the most scalable solution that can be adopted by farmers en masse.

Various development and research organisations such as the Tata Trust’s Reviving the Green Revolution Cell, The Nature Conservancy, Borlaug Institute for South Asia, CIMMYT, Precision Agriculture for development, Syngenta Foundation for sustainable agriculture have been taking part in a collective project to build a sustainable and clean alternative to crop residue burning in 16 districts of Punjab and Haryana.

These coalitions are doing their best to promote the adoption of the Happy Seeder machines at a mass scale. They work along with the central and state governments in Punjab and Haryana, which are offering subsidies to encourage both individual farmers as well as custom hiring centres / cooperative societies and Krishi Vigyan Kendras, state departments of agriculture, agricultural universities and ICAR on capacity development and knowledge dissemination.

States other also are experimenting with the Happy Seeder. For example, in West Bengal, research trials over four years have been conducted in Coochbehar and Mathabhanga and jute was grown using the zero-till Happy Seeder technology. The project was carried out by the Australian Centre for International Agricultural Research, along with CIMMYT, Uttar Banga Krishi Vishvavidyalaya and the state government.

Similarly, in the tribal villages in Kasdol block of Baloda Bazar, Chhattisgarh, the Happy Seeder has successfully demonstrated to manage paddy residue without burning it, while recycling plant nutrients to improve soil health. It was presented under the Farmer First Project of ICAR.

It’s obvious that both corporate foundations as well as local and international non-profits have thrown their support behind the Happy Seeder to help popularise this clean and scalable technology for today and tomorrow.

Assessments have shown that using the Happy Seeder can contribute to the following benefits:

Happy Seeders need tractors above 45 horsepower to function. So, small-scale farmers remain reluctant to procure them. This is why it is important to facilitate renting of Happy Seeders and seeder-mounted tractors through contractual services and custom hiring centres, in addition to increasing government subsidies.

Investing in compatible heavy-duty tractor technologies and subsidies in diesel also will go a long way in alleviating the concerns of the farmers.

Amrik Singh, a farmer from Naulakha in Punjab’s Fatehgarh Sahib district, has been using the Happy Seeder sustainably to maximise his rice-wheat combined harvest, while practising conservation agriculture.

Cultivators like Singh are happy to contribute to the crucial mission of combatting air pollution over Delhi and the National Capital Region, while also retaining soil nutrients and symbiotic creatures like earthworms and micro-organisms.

A majority of Indian farmers don’t want the indispensable occupation of producing food crops for their fellow citizens to be also responsible for choking their lungs. With our farmers embracing the future, it’s only a matter of time when burning of crop residues will be a thing of the past.