The government needs to midwife Indian agriculture to an organic revolution

Instead of making it difficult for the organic farmers, government should devise methods to reduce the complexity of the certification process

Organic farming is native to India. However, since 1966, with the inception of the Green Revolution in India, it has taken a backseat.

The transition from traditional agriculture to modern agriculture shifted the objective of farming. The need to change the methods of farming to meet the demands of the growing population was inevitable. The emphasis was laid on intensive agriculture practices which later proved detrimental to the environment.

The history of organic agriculture in India dates back to the Indus Valley Civilization. Mostly, traditional forms of agriculture prevailed in India. Farmers then practiced sustainable agriculture for their subsistence.

They used wide a variety of organic techniques including recycling all organic materials, the use of indigenous strains, crop rotations and intercropping, incorporating legumes and biological pest control. Livestock rearing was an integral part of farming.

The period of British colonisation saw extensive change. The farmers were compelled to grow mostly cash crops such as cotton, indigo and opium for the external market. As a result, poverty increased and land fertility reduced.

After independence, the main aim of the government was to ensure food supplies to the growing population. Therefore, they adopted new USA-developed high yielding varieties of wheat (Norin 10) and rice (IR-8) in the Green Revolution of the 1960s.

These demanded high inputs of irrigation and chemicals. Yields increased substantially but there were costs to be paid. Many small farmers who were unable to afford seeds and inputs, were driven off land while others found themselves caught in a credit trap. 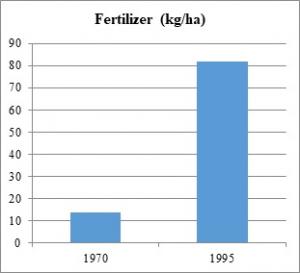 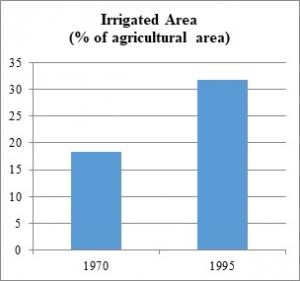 Increase in application of fertilizers and irrigation after Green Revolution

According to the available statistics, India ranked ninth in terms of the world’s organic agriculture land and first in total number of producers according to 2018 data.

As on March 31, 2018, the total area under the organic certification process in India is 3.56 million ha. This includes 1.78 million ha of cultivable area and another 1.78 million ha for wild harvest collection. 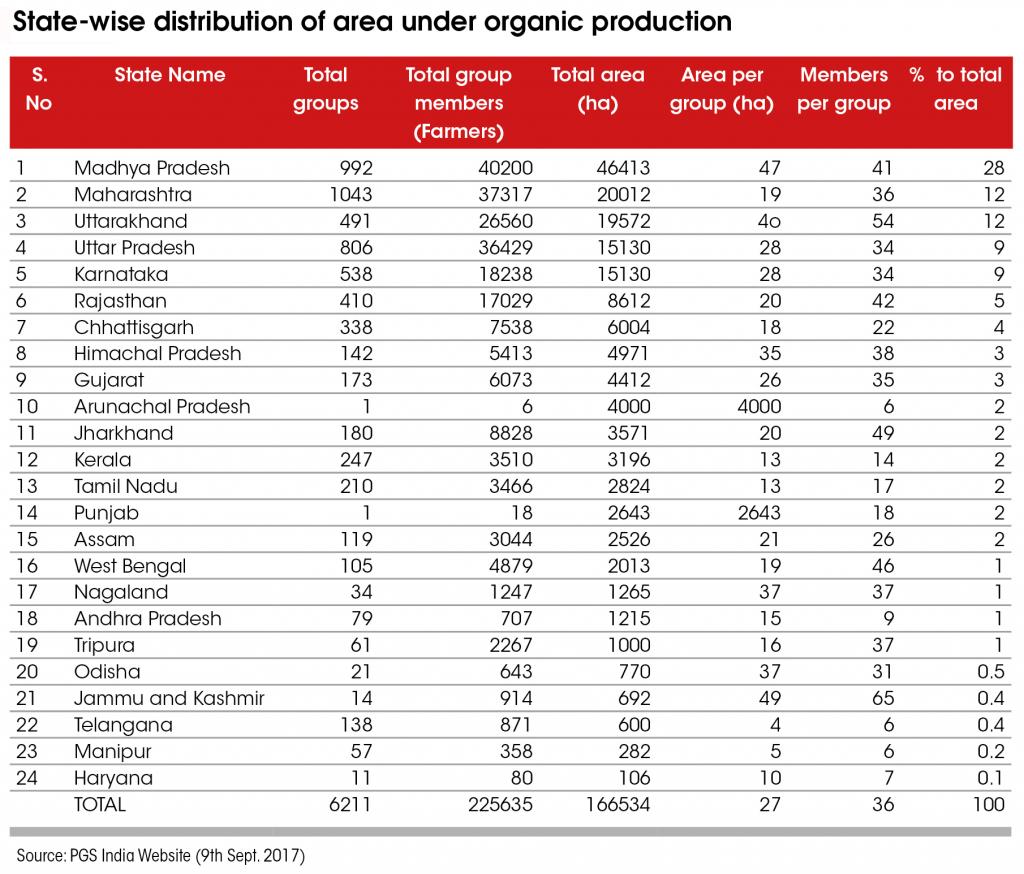 Among Indian states, Madhya Pradesh is the largest producer, followed by Maharashtra, Karnataka, Uttar Pradesh and Rajasthan. In terms of commodities, oilseeds are the single largest category followed by sugar crops, cereals and millets, fibre crops, pulses, medicinal and aromatic plants and spices and condiments.

In terms of export value realisation, oilseeds (47.6 per cent) lead among organic products, followed by cereals and millets (10.4 per cent), plantation crop products such as tea and coffee (8.96 per cent), dry fruits (8.88 per cent), spices and condiments (7.76 per cent) and others. 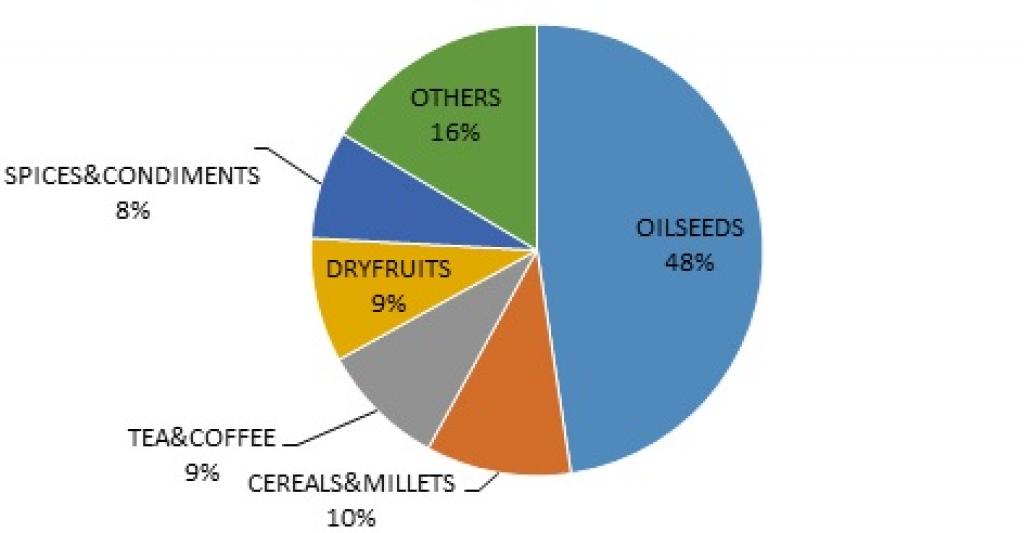 Though India has the highest number of farmers engaged in organic farming, it accounts for less than one per cent of the global organic market.

According to the TechSci Research Report, the global organic food market stood at $110.25 billion in 2016. The forecast for gross domestic product growth in the financial year 2019 is predicted to be more than seven per cent by the Reserve Bank of India.

This will certainly improve the performance of different industries like organic food, pharmaceuticals and FMCG (Fast Moving Consumer Goods).

According to the Agricultural and Processed Food Products Export Development Authority, the demand for Indian organic food products is constantly on the rise worldwide.

1. A study by the Associated Chambers of Commerce and Industry of India or Assocham and global consultancy firm, Ernst and Young revealed that most organic farmers are struggling due to poor policy measures, rising input costs and limited market.

Another study conducted by the Consumer Unity and Trust Society in 2015 stated that 98 per cent farmers of Rajasthan are aware of ecological hazards of conventional chemical farming but fear of decline in production and unavailability of organic inputs in the market discourage them from switching to organic farming.

According to the Indian Council of Agricultural Research, productivity on an average dips by 6.7 per cent in the first year during transition. The Report on Doubling Farmers’ Income by the Ashok Dalwai Committee supports the claim of drop in yields when embracing organic — up to 30 per cent. It also states that a decade is required to attain the pre-conversion yield level.

To aid the farmers during the conversion period, government should not only provide financial help but also favourable policies as well as a part of the inputs should be made available. This will sort the problem of shortage of inputs and will encourage farmers to choose organic farming.

2. Even after the produce reaches the markets, consumers find them expensive and discouraging. If a consumer switches to organic food, he or she has to bear an additional expenditure of Rs 1,200-Rs 1,500 per month, according to the Assocham report.

Awareness of consumers to the benefits of consuming organic products is very important in boosting up the organic market in India. The consumers must be made aware of the amount of toxic chemicals they consume when they use products of conventional farming.

A chart estimating the amount of pesticides intake per person per day is given below. The products of organic farming may be costly but are 100 per cent safe. 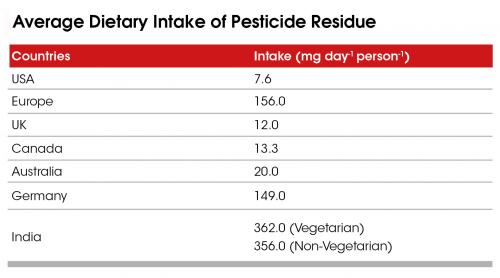 3. The report also mentioned the concern of high cost post-harvest handling of organic foods because of mandatory segregation of organic and conventional produce. The post-harvest losses in agricultural products are also high.

The PGS (Participatory Guarantee System) groups should come forward to form co-operatives at the local level to solve the problems of storage and post-harvest handling. This will not only minimise the cost of transportation but also decrease the post-harvest losses (of perishable items).

4. The steps taken by the government have not been adequate enough to address the setbacks of the Paramparagat Krishi Vikas Yojana (PKVY). The Centre’s free certification programme for organic farmers is an example for the same.

A 2018 report on the implementation of PKVY highlights that all states, except Tripura, Odisha and Karnataka, have failed to utilise even 50 per cent of their funds under the scheme. While the Centre has increased allocation for the scheme by 44 per cent for the current year, corrective measures are needed to ensure that the sates become responsible and contribute towards 'Organic India'.

Even when the farmers are struggling to find a sustainable price for their produce, the existing certification process is not only complicated but also expensive. On the other hand, the conventional farmers use toxic substances without any restrictions.

An embargo should be made on toxic chemicals used by conventional farmers which deteriorate environment and laws should be made so that these farmers need to specify the amount and concentration applied on their produce.

It is high time that our country reverts back to organic farming. This will not only help to ameliorate the ecosystem but also to improve human health.

The organic market in India has a huge potential and has been showing some very promising results during the recent years. The conversion period may appear difficult for both the farmers and the consumers, but in the long run, this will prove worth struggling for.

Adequate policy measures by the government and dedicated effort at local level would ensure a toxic-free future for our country.

Abhik Roy and Nikhil Kumar are students at the Naini Agriculture Institute in Prayagraj. Views expressed are the authors' own and don't necessarily reflect those of Down To Earth