Where will farmers go to get jobs?

There is a significant reduction in farm jobs. India must create alternative opportunities for those abandoning agriculture 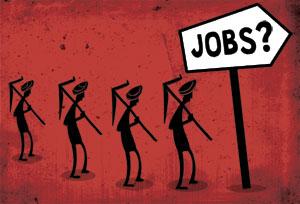 By the time you read this edition of Down To Earth, the Union government would have delivered a “farmer-friendly” budget. This is the least a government facing re-election would do keeping in mind the country’s economic situation. But with this, the challenge of fixing the economic meltdown in rural areas has just got tougher. India’s rural economy—for the record, it is almost equal to the urban economy in terms of output and size—is undergoing a structural change. And just cosmetic touches in the budgetary priorities might exacerbate the problem.

It is common knowledge that India is facing a deep agrarian crisis. But the context of the crisis is where the real message lies. Farmers are earning less and less despite increasing farm productivity. People are not finding jobs within rural areas despite the rural economy growing at an impressive rate. Agriculture, which is the biggest employer, is losing the capacity to create jobs. More and more people are quitting farming to pursue alternative sources of livelihood. But even these are not adequate to absorb such a massive surge in job-seeking people.

Recently, economists Ramesh Chand, S K Srivastava and Jaspal Singh from the NITI Aayog circulated a discussion paper on the changes in rural economy and their impact on employment. It offers, by far, the most objective analysis of the depressing rural employment scenario in the face of various positive economic indicators. According to the paper, between 1970-71 and 2011-12 “India’s rural economy expanded from Rs 3,199 billion to Rs 21,107 billion at 2004-05 prices”—it was a growth by seven times. Now, compare this with the growth in employment generation: it grew from 191 million to 336 million, or by less than double, during the period.

Another piece of information also points at the jobless growth of the rural economy. During the four decades, the agriculture sector, for the first time, witnessed a reduction in workforce. According to the NITI Aayog paper, rural employment registered a 2.16 per cent annual growth rate before economic liberalisation, initiated in 1991. In the post-reform period, or in the early 1990s, it came down to 1.45 per cent. In fact, it recorded a negative growth at a time when the entire country was witnessing an economic boom. “Thus, employment increased at a much lower rate compared to output and it even declined in the wake of high growth in output post 2004-05,” says the paper.

In fact, the rural economy’s capacity to create jobs according to demand is in the negative now. This means the non-farm avenues in rural areas are not able to absorb those abandoning agriculture. Then where are these people going to seek employment?

In 2011-12, there was a need to shift some 84 million agricultural workers to non-farm sectors. This required a 70 per cent increase in non-farm jobs. Usually, people leaving agriculture seek employment in manufacturing, construction and other service sectors in urban areas. But these sectors are now facing a slowdown and, as mentioned, will not be able to absorb the entire workforce leaving the farm sector.

Then how does one make jobs available for such a high number of people quitting farming? Addressing this challenge will not be possible just by introducing a one-off “farmer-friendly” budget. It requires a soul-searching overhaul of the rural economy, which must begin with the acceptance of the fact that there is a crisis. The government has already started selling a “blooming India” at the World Economic Forum. But it must remember that a misplaced pride often leads to a rude electoral jolt!

(This article was first published in the 1-15 Februrary issue of Down To Earth).