Kharar, an urban settlement in Chandigarh, is witness to fast-track development in the past few years

The urbanisation in Kharar — which has an agro-based economy — needs to be controlled Photo: Dimple Behal

Mankind has altered land for different purposes, including extraction of resources, building settlements, agriculture herding and developing infrastructure. The extent and the pace of transforming land through anthropogenic activities due to population growth significantly rose since the 18th century.

Infrastructure across India must expand rapidly, according to the Department of Land Resources in 2013. Industrialisation in the manufacturing sector will boom and urbanisation will escalate drastically. On the other hand, agricultural lands are crucial as the population in rural areas depend on it.

There were 53 million-plus cities / urban agglomerations, according to the 2011 census, an increase from 35 million since 2001. Land is one of the three major factors of production, along with labor and capital in classical economics and is an essential requirement to housing needs and food production.

Land-use change is necessary and essential for economic development and social progress. It, however, does not come without a cost. With such rapid urbanisation, there is a pressure on land and its resources — including food and timber production — with a significant impact on the livelihood of millions of people.

Punjab produces 20 per cent and 9 per cent of the country’s wheat and rice respectively.

It can, thus, be seen that the share of agriculture in the GDP of the state and the country was on a rapid decline. Punjab also experienced urbanisation: An increase to 38 per cent in 2011 from 28 per cent in 1981.

One out of two individuals in Punjab are urban migrants, making it one of the most urbanised states in the country. It is, thus, pertinent that land-use changes since the past were significant for urbanisation to take place

Among all states and Union territories, the National Capital Territory of Delhi and the union territory of Chandigarh are the most urbanised with 97.5 per cent and 97.25 per cent urban population respectively, according to the Union Ministry of Housing and Urban Affairs.

Peri-urban areas and city areas both expanded rapidly. The Punjab New Capital (Periphery) Control Act, 1952 was formulated to regulate haphazard development around Chandigarh to protect the rural population from contact with urban areas, along with maintaining urban-rural dichotomy.

This plan includes six urban settlements that reflect a rapid urbanising trend. The graph below shows the change in land use and land cover from 1990 to 2020 in the GMADA area.

Change in land use, land cover at Greater Mohali

It can be inferred the agricultural land is reducing rapidly. Similarly, Kharar, an urban settlement, is witness to fast-track development in the past few years. The Kharar local planning area is at a distance of about 10 kilometres from Chandigarh city, with an area of 32.9 sq km.

The city’s population was increasing at an incremental rate, more than other towns in the Greater Mohali region. Kharar is also the second-most populated urban settlement in the GMADA area, accounting for approximately 15.3 per cent of its urban population.

Development continues in infrastructure corridors, largely along with transport networks. Older residential areas and development is mixed with cluster housing, while new development is in the form of real estate.

Around 6.41 sq km agricultural land was lost to the Kharar local planning authority since 2000, even after the city envisioned it to be agro-based.

Real estate projects in the area are booming, with the development authority giving permission to townships of a minimum area of 10-15 acres for the purpose of development.

This means future development will be more extensive in nature. Considering the wide variety of goods, food and high fertility of soil provided by peri-urban farms, it is highly deplorable — especially in the current situation — to promote such development.

A similar scenario may be seen for other towns around Chandigarh, even though most of them have no vision to promote agriculture, but, instead want industrial investment. 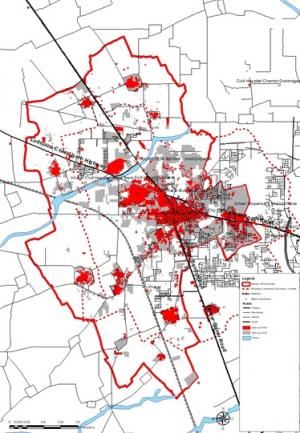 It is highly objectionable to see the current framework for allocating land for future use and changing land-use patterns impose a toll not just on agricultural land but also on food security and people associated with agriculture.

Examining the current situation, there is a need to change the current practice of allocating land use on the basis of development needs. Agriculture will be lost if such considerations are not given. Looking into the future of agriculture, it will be more intensive: A small parcel of land would be used for producing more food products.

Allocating land wisely based on agriculture productivity and ecosystem services can, thus, help. Otherwise we‘ll lose land in the name of development.