To ensure that inconvenient research is besmirched and killed, industries are invariably attacking the science and researchers 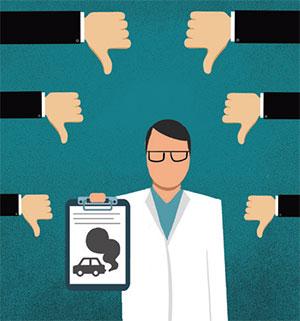 How not to allow inconvenient public research: this has to be a case study that all corporates are taught in business schools. Why do I say this? Because there is a pattern that corporate India follows when it comes to ensuring that such research is besmirched to the point that scientists, who in any case are resistant to join discordant discourses, are pushed to the point to even greater reticence and retirement.

We saw this when it came to pesticide contamination in our food. First, when the issue of pesticide toxicity broke, it was government scientists, weaned on the idea of using pesticides for growth that came to the assistance of the beleaguered pesticide industry. Then when scientists broke rank to do research on the toxicity of pesticides and their link with human health, industry went ballistic. Their strategy was always to ensure that they targeted each researcher individually; they attacked the science and then invariably went after the individual.

But why am I writing this now? Because the same strategy is at play to ensure the inconvenient research on the sources of air pollution is besmirched and killed.

The Ministry of Earth Sciences (MOES) published a recent report on the sources of air pollution in Delhi. From the date the report was published the Society for Indian Automobile Manufacturers (SIAM) has been hammering away at it—disputing facts and challenging its conclusions. When questions on the technical issues raised in the report were answered, it has continued to lobby against the report. Why? Why should this scientific report raise the hackles of SIAM? Why this virulent campaign?

Because this report is inconvenient. It establishes that vehicles contribute 40 per cent of the total pollution load in Delhi—roughly half the PM2.5, more than 60 per cent of the NOx emissions and over 80 per cent of carbon monoxide load. All this means that action to combat air pollution must drive changes in the fuel, technology of commercial and light-duty vehicles and must target the numbers so that we can move, but without more individual vehicles.

So, what does SIAM want? It wants government to back down and take this research off its website. But this is not all. It also has its pet research for which it wants credence. This research has been supported by another government ministry, the Department of Heavy Industry, and has been done by the Automotive Research Association of India (ARAI) and The Energy and Resource Institute (TERI). This study “establishes” that vehicles only contribute some 15-23 per cent of the PM2.5 load in the city. Even less when you take into account PM10. It is dust that is the bigger problem—adding up to 42 per cent of the pollution load.

Even if you put aside the obvious conflict of interest of the ministry that is in charge of promoting the vehicle industry or of the automotive research association, which is directly funded by the vehicle manufacturers, the fact is that comparing the two studies is completely erroneous. The MOES study is an emission inventory, which looks at total pollution load from different sources. While the ARAI-TERI study is source apportionment—which takes the particulates and fingerprints—or tracks—back to the sources. Apples and oranges, scientifically speaking.

Given the toxicity of the air we are breathing we need to address all sources of pollution—vehicles, industry and dust. But industry needs to be in the clear—somebody else is responsible. Not us. We are a small part of the problem, they say. The ARAI-TERI study helped them establish this. Now, they do not want the apple-cart rocked.

So, they have no worry about the fallout of this attack. They are going all out—even requisitioning the services of eminent scientists in questioning the results. It is inconvenient. It is wrong. I say this with some confidence that the same vehicle industry cannot anymore argue that air pollution is not toxic or that diesel emissions are not likely carcinogenic. This is what they tried hard to “establish” through their science for the past some years. So, I believe, public science will survive the assault of industry. It must.