COVID-19: Dirty air and vice of the virus

These are extraordinary times. But sanity has to prevail over panic. As social distancing allows more reflective time, can we reflect on the take away from current disruption for safer times?

This public health emergency due to the novel coronavirus disease (COVID19) pandemic, and its unpredictability has given us a new prism to view the air pollution crisis. Shades of different issues and concerns have surfaced.

At one level, massive economic slow down and lockdown to stop the spread of the virus has bent the pollution curve. Naturally! Less vehicles, closure of factories and construction are responsible. All are asking how will this transitory change play out in the long run?

On the other hand, scientists have warned that this pandemic can get worse in areas with high level of pollution. As lungs and health of people are already compromised, this will make them more vulnerable to the virus.

This crisis, however, has reconfirmed that when people understand the immediacy of health risk, it builds strong collective community support for difficult measures. But this is not the case when risk perception of air pollution-related diseases (as many as 1.2 million people die prematurely annually in India) remains weak and the dangers of the latent risk are not well understood.

The current crisis, for instance, has allowed significant social and workplace re-engineering for social distancing. This has unlocked potential of digital and virtual interconnectedness to change the idea of workplace.

Vehicles miles travelled have reduced, and travel at human scale — walk and cycle that allows safer distances — has increased. Manufacturing and energy production will eventually pick up but the crisis indicates the boundary within which they must operate to contain emissions in the future.

How crisis is mopping up the air

As India locks down, air pollution falls sharply in mega cities. The Centre for Science and Environment's analysis of daily pollution data before and during the lockdown so far in Delhi, Mumbai, Kolkata and Bengaluru shows striking improvement.

Mumbai has locked down before others. Indicatively, average daily PM2.5 levels of couple of days preceding the the ‘Janata Curfew’ show a drop of 26 per cent, 61 per cent, 60 per cent and 12 per cent in Delhi, Mumbai, Kolkata and Bengaluru respectively. In Mumbai, the lockdown started earlier and therefore comparison has been done accordingly (March 17-19, 2020 vs March 20-23, 2020).

Nitrogen dioxide (NO2) that comes entirely from combustion sources, has also reduced by 42 per cent, 68 per cent, 49 per cent and 37 per cent respectively.  This change is inevitable as vehicles are off the road, many factories have shut, and construction activities have slowed down. 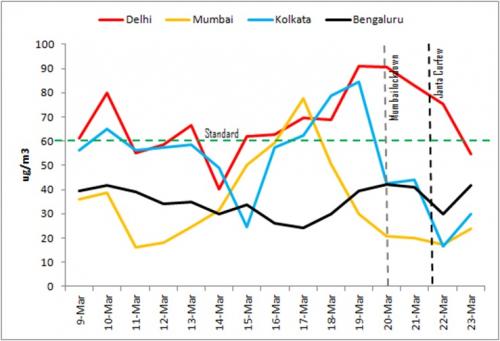 Daily NO2 levels in Delhi, Mumbai, Kolkata and Bengaluru between March 9-23, 2020 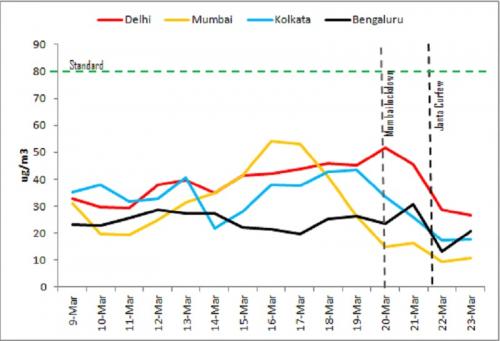 This mirrors the global trend. Satellite images from the United States space agency Nasa show very low concentration of nitrogen oxide during the lockdown phase in Wuhan in China in February.

The worrying side of the story is that dirty air may also intensify corona disease in polluted areas. European Public Health Alliance (EPHA) warned last week that patients with chronic lung and heart conditions caused or worsened by long-term exposure to air pollution are less able to fight lung infections. This risk factor could have been reduced if overall air pollution had improved.

These indicate SARS caused higher deaths in more polluted regions and death rates increased with pollution levels — from about four per cent in low pollution zones to 7.5 to 9 per cent in moderate or high air pollution areas.

Now, the search is on to understand the role of particulate pollution in spread of the virus. Reportedly, scientists in Italian Universities (Societa Italiana Medicina Ambientale along with Universita di Bologna and University di Bari) are investigating the link between particulate pollution and the Corona outbreak in the Po river valley in Northern Italy during February this year.

The World Health Organization, however, has not reported airborne spread of the virus but has cautioned the health workers to guard against airborne droplets in close proximity of patients.

It is hoped that greater awareness about the role of air pollution in enhancing vulnerability of populations to such pandemics and the overall disease burden will strengthen collective and political action in the future.

Draw strength for times to come

This pandemic has wisened us to the reality that long-term and sustained action to reduce air pollution and health risk is non-negotiable. Already, 1.2 million Indians are dying and many more are falling ill annually due to air pollution-related diseases that include cardiovascular, ischemic heart disease, chronic obstructive pulmonary disease and lower respiratory infection.

Moreover, diabetes and hypertension — also influenced by air pollution — are endemic. This burden of endemic diseases has increased the population-wide risk to pandemics as this makes resisting the virus tougher.

No doubt, this public health emergency inevitably needs drastic short-term measures and strong community and political support. This will be rolled back once the crisis is over.

This is not the best of reasons for arguing for crisis-led change. But this experience with lockdown and collective community action to fight the pandemic has proven once again the importance of deepening public awareness of health risks to drive solutions.

Only this can help to build public support and confidence in harder, long-term solutions that otherwise seem politically and socially unrealistic and difficult to implement. Nation-wide collective lifestyle adjustment that we have witnessed so far is a powerful message.