Delhi pollution crisis: The figure of 4-10% for stubble fires is not wrong but irrelevant

There need to be different strategies to address long- and short-term exposure to pollution problems in Delhi. Governments are aware of it, but still somehow manage to confuse the two

On November 15, 2021 the central government filed an affidavit with the Supreme Court that said only four per cent of PM2.5 in Delhi is because of agricultural stubble burning in winters and seven per cent in summers.

This new information has left most people and the Delhi government dumbfounded.

That is because the central government agencies responsible for monitoring and forecasting air pollution are still publishing a much higher percentage. Thus, it is worth looking into these new numbers.

The Centre said its submission was based on a scientific study but it did not disclose any details. So, it is impossible to know how these numbers were actually arrived at.

But their credibility can be checked by looking at the data being published by central government agencies such as the Central Pollution Control Board (CPCB) and SAFAR. These agencies publish near-real-time data on air quality in Delhi and contribution of smoke.

These publicly available official granular databases have actually given people power to cross-check the ‘metadata’ that governments like to share with courts and the public.

SAFAR has been reporting the contribution percentage of stubble fires to Delhi’s PM2.5 levels since 2018.

This is based on a complex model which takes into account multiple meteorological factors, fire instances observed via satellites and monitored PM2.5 concentrations.

Approximately 11-16 tonnes of PM2.5 suspended in Delhi’s air during October-November can be attributed to smoke from the farm stubble fires in northern states.

This figure is calculated using:

This smoke fall is highly variable on a daily basis. It generally starts in the second week of October and ends in the first week of December.

There have been 11.5 tonnes of smoke fall this year. The final number might be higher than 2018, with two weeks still left in the stubble burning season. But it will not come close to the 2020 figure.

The PM2.5 load has been 260 tonnes so far this year, putting smoke fall contribution at six per cent. But it would settle at 4-5 per cent by year-end.

The smoke’s contribution to the seasonal load works out to be 5-7 per cent.

But if we further narrow it down to just the stubble burning season (October and November), the contribution climbs up to 13-17 per cent.

Not the right matrix

SAFAR puts out daily contribution data and over the years, it has varied from 0-58 per cent. This year, the highest daily percentage has been 48 per cent, which was reported for November 7.

Smoke fall is a high-intensity but short-lived event. Hence, increasing the averaging time to establish its contribution can significantly dilute its immediate impact on public health.

It is highly problematic practice.

It is like presenting the annual concentration of methyl isocyanate gas in Bhopal’s air and then concluding that the leak on the night of December 2-3, 1984 that killed thousands was insignificant and thus, Union Carbide should not be blamed.

There is a reason why separate standards are defined for long-term and short-term exposure.

Some pollutants are so toxic that scientists have not even bothered defining standards for long-term exposure. Carbon Monoxide and surface ozone are two such common pollutants. Their levels need to be controlled on an hourly basis.

People are hung up on the figure that smoke contribution was 48 per cent November 7 this year. But that wasn’t the worst day of smoke fall.

Forty-eight per cent on November 7 works out to be 127 microgram per cubic metre (µg / m3) which is a high number but not the highest for this season. 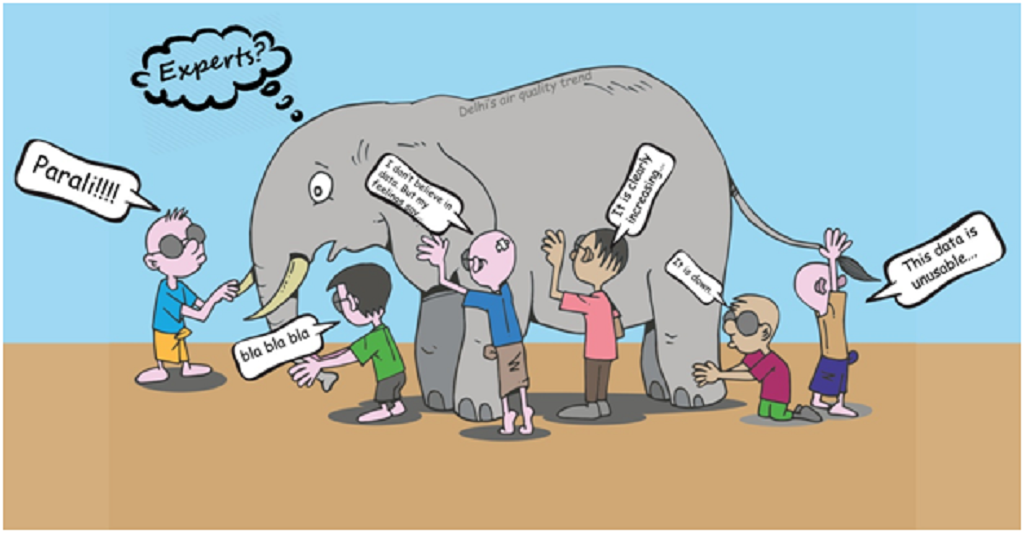 On November 5, the smoke fall was 180 µg / m3 (42 per cent higher than November 7). But due to elevated PM2.5 levels from the local pollution (including Diwali pollution), it worked out to be 36 per cent.

In fact, more smoke entered the city on November 6 and 12 than on November 7. But due to high local pollution levels, their percentage works out to be lower.

The percentage contribution during this period fluctuated between 25 per cent and 48 per cent. If this had come into the city during summer or the monsoon season, it would have easily made up 60-90 per cent of Delhi’s PM2.5.

Exposure to most pollutants have two kind of impact on human health, short-term and long-term. Independent standards are made to tackle both.

It says the public should not be exposed to levels higher than this on two consecutive days. The long-term standard for PM2.5 is set at 40 µg / m3 annual average. The government is required to meet both in order to safeguard public health.

PM2.5 daily levels in Delhi fluctuated between 21 µg / m3 and 501 µg / m3 this year so far. This 500 µg / m3 variation in daily values within a year has been observed every year since wide-scale continuous real-time monitoring started in the city.

This range has remained even though annual average has been falling thanks to many steps taken by national and state governments. There has been an over 30 per cent improvement in annual PM2.5 since 2016 according to the CPCB affidavit in the SC.

How is that possible?

Well, all the steps taken so far (CNG, ban on pet coke, closing of coal-based thermal plants, diversion of trucks, etc.) have managed to bring down local pollution which has changed the number of days when the 24-hr standard is met in the city.

This year, 149 days saw PM2.5 levels under the 60 µg / m3 threshold. There has been steady increase in better air quality days since 2012-14 when the number was in single digits.

But the story is not the same when we look at days with extremely high pollution.

And these days always happen as a cluster in November, almost perfectly coinciding with the peak of the farm stubble burning season. This is also indicative of the fact that negligible efforts have been made to tackle the cause of this specific issue.

Therefore, it is highly reductive of anyone to present long-term contribution data to formulate solutions to short-term exposure problems. Actions are needed on both fronts. But expediting long-term solutions won’t give relief if Delhi is to be pulled out of an episodic emergency.

The sad reality is that during these two weeks, when the smoke fall peaks, even if the city shuts down and miraculously manages to bring all local and regional pollution to zero, air quality will still plummet to the ‘very poor’ AQI category and would remain there.

And even if the smoke is removed, the current local pollution is so high that during adverse weather conditions, air quality would still be in the ‘very poor’ category.

That is why the figure of 4-10 per cent contribution, as told to the SC is not a wrong figure. But it is an irrelevant figure to address the problem at hand.

There need to be different strategies to address long- and short-term exposure to pollution problems in Delhi. Governments are aware of it, but still somehow manage to confuse the two.

Data officially collected in the last four years have made it amply clear that there is a need to drastically reduce pollution from all sources, whether local or remote. There is no ambiguity anymore. Just political unwillingness and bureaucratic incompetency.