New analysis of global burden of diseases shows very high rate of increase in early deaths from particulate and ozone pollution. Over a quarter of global deaths from air pollution occurs in India. 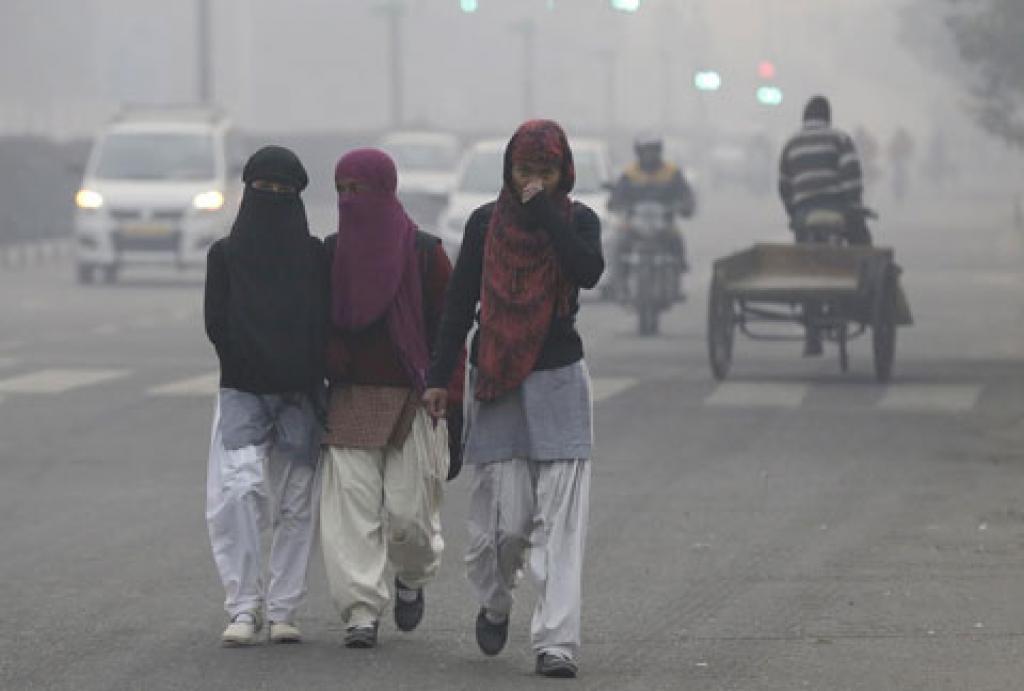 The new analysis of global burden of disease (GBD) estimates released by the US-based Health Effect Institute (HEI) has exposed stunning results. Globally, air pollution is estimated to cause more than 4.2 million early deaths—of these, 1.1 million deaths occur in India alone. This is more than a quarter of the global deaths. India ranks second in PM2.5-related deaths in the world, and nearly equals China, which scores the highest number of early deaths due to PM2.5. Worse, India now tops the dubious list of highest number of early deaths due to ozone pollution.

With the release of State of Global Air 2017 by the HEI, the GBD estimates have now become annual. “We are seeing increasing air pollution problems worldwide and the new report explains why air pollution is a major contributor to early death. We have seen progress in some parts of the world—but serious challenges remain,” said Dan Greenbaum, president HEI, the global research institute that designed and implemented the study.

Air pollution is the leading environmental cause of death worldwide; as many as 92 per cent of the world’s population lives in areas with unhealthy air. This new report—State of Global Air 2017 by HEI—is a deeper analysis of the earlier GBD estimates of 2015 and looks at the long-term trends from 1990 through 2015.

The HEI has built on the GBD project of the Institute for Health Metrics and Evaluation (IHME), involving more than 2,000 researchers who enumerate and track death and disability and the influence of behavioral, dietary and environmental risk factors for more than 300 diseases and injuries, by age and sex, from 1990 to the present, in 195 different countries and territories. “The new report is a deeper analysis extracted from the most recent GBD, (2015, published last year). It allows one to look at long-term trends from 1990 through 2015,” explains Robert O Keefe, vice-president, HEI.

India cannot afford to remain complacent or in denial any more. With so many people dying early and falling ill and losing productive years due to particulate and ozone pollution, it is a state of health emergency. This demands nation-wide intervention to ensure stringent mitigation and a roadmap to meet clean air standards. Very recently, India’s Environment Minister was on a denial mode claiming “there is no conclusive data to establish direct correlationship of death exclusively with air pollution”. The new GBD data calls for even more urgent and decisive interventions.

India ranks second in early deaths due to PM2.5: Deeper country-wide analysis shows that India is at the highest risk. The number of premature deaths due to PM2.5 in India is second highest in the world. It has nearly equalled China’s dubious record. While China has recorded 1,108,100 premature deaths in 2015, India recorded 1,090,400 deaths. Even though India had started off with a much lower number of people dying early deaths in 1990 it has quickly caught up with China (see Table 1: People dying early due to PM2.5 pollution)

Early deaths in India are also highest among the South Asian countries – it is 9 times higher than the neighbouring Bangladesh and 8 times higher than Pakistan. This is an extremely serious issue as we know from the past GBD estimates air pollution is already the fifth largest killer in India. 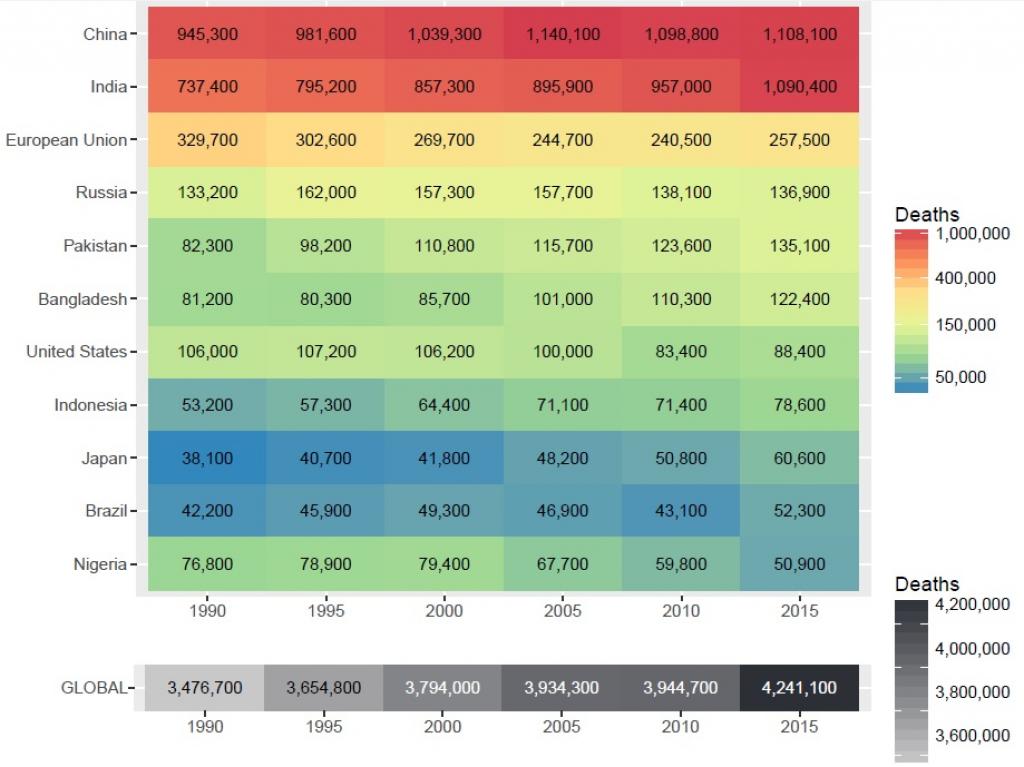 Without anyone noticing it, ozone, a very reactive gas, has become a serious health problem in India. Even though the absolute number of early deaths due to ozone is far less than those caused by PM2.5— 107,800 due to ozone as opposed to 1,090,400 due to PM2.5—India records the highest number of cases in the world. Ozone aggravates respiratory problems, especially chronic obstructive pulmonary disease (COPD). In fact, very recently, India has included COPD in its non-communicable disease programme. This only brings out the importance of reducing environmental risk factor.

Ozone is responsible for much higher rate of increase in early deaths than particulate matter. It is the rate of increase in India that is scary. Ozone-related early deaths in India have recorded the highest increase—by as much as 148 per cent since 1990. During the same period, health risk from particulate pollution, which is already a very big problem, has increased by 48 per cent.

As ozone monitoring in India is extremely limited and there is barely any country-wide data, we followed up to understand the reason for high number deaths related to ozone. The HEI scientists have explained that ozone in GBD estimates is from chemical transport model, but the evidence of increasing ozone levels in India, especially in north India, is seen from the available measurements. Not many routine measurements are available except from those that are from aircraft campaigns.

Increasing ozone burden in India in terms of deaths is due in part to population increase and population ageing. Michael Brauer, associated with the new study, says, “For ozone, the increase in exposure is so large that it overwhelms the improvements in underlying chronic obstructive pulmonary disease mortality. In other words, exposure matters and combines with ageing and population growth to lead to increasing deaths. For particulate matter, there is an increase in exposure but the overall improvement in mortality rates are large enough to lead to a decrease in attributable mortality rates.”

Ozone is not directly emitted but is formed from reaction of variety of gases like the nitrogen oxide, carbon monoxide and volatile organic compounds under the influence of sunlight and temperature. To some extent, rising temperature is also aggravating this trend. In fact, a new genre of science is showing that countries such as India that are in tropics and sub-tropics or close to equator, the climate projections suggest further increase in ozone. Some more recent studies show these pollutants in tropical regions cause more ozone per tonne of emissions than emissions from regions further north like Europe and North America. Not only the emissions of gases are increasing but also the geographical disadvantage is adding to India’s plight. Already, connection between urban heat island and ozone has drawn attention in Indian cities.

India will have to watch this science well. If the problem is going to grow in tropics and sub-tropics and around the equator, it is also important for the global community to understand the regional drifts of ozone precursor towards equatorial regions as well.

India will be well advised to take early and stringent steps to control ozone precursors which are very difficult to control, as seen from the developed world. It would mean very stringent control of gaseous emissions from combustion sources, including vehicles. Air pollution problem cannot be dismissed as dust. Ozone precursors like nitrogen oxides, carbon monoxides and volatile organic compounds also have serious local public health impacts.

India will be well advised to take early and stringent steps to control ozone precursors which are very difficult to control. “In short, ozone is likely to become more important in India and as we know from US story it is harder to manage and control”, warns Robert O Keef of HEI. 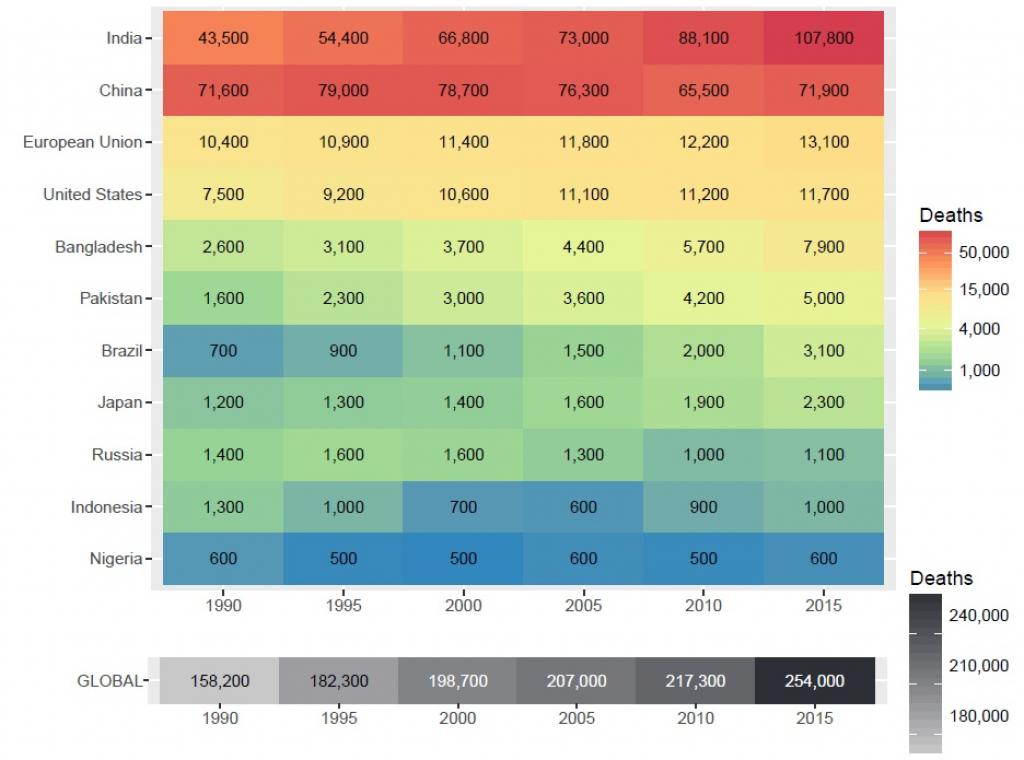 This new analysis shows that long-term exposure to fine particulate matter has contributed to 4.2 million premature deaths and to a loss of 103 million healthy years of life globally in 2015. This is the fifth highest risk factor for deaths from heart disease and stroke, lung cancer, chronic lung disease and respiratory infections. This report has looked at 79 health risk factors. An additional 254,000 deaths occur due to exposure to ozone and its impact on chronic lung disease. PM2.5 was responsible for a substantially larger number of deaths than other well-known risk factors.

It is important to note that the developed world, which has witnessed early action on air pollution, has seen some improvement but the risk remains. In the US, there has been about 27 per cent reduction in average annual population exposure to fine particulate matter. The reduction in Europe is comparatively smaller. Yet, some 88,000 Americans and 258,000 Europeans still face increased risks of dying early due to particulate levels today.

The new scary results leave no room for diffidence and denial of the problem anymore. As the GBD analysis now becomes an annual tracker of change, it is possible for the world and India to know the trend in emerging health risk from air pollution. This has to inform policies and action to protect public health.

Developing world is running against time. If air pollution did not get worse but remained just as it is today, the number of lives lost will continue to grow as the population in developing countries grows and ages. Asia, especially, is poised for an enormous demographic and epidemiological transition. The pollution levels and health risk would need to decline significantly over the next 15 years merely to offset health impacts from growing numbers and ageing. This brings out the magnitude of the challenge. This challenge gets more complex due to its unique pollution profile. It is not enough to contain air pollution. It must be reduced significantly. And this will require a change in mindset that must think in leaps and not steps.

The Union Ministry of Environment, Forest and Climate Change needs to implement nation-wide strategy to control both particulate and gaseous pollutants to meet clean air standards.