Lateral Thoughts: Air pollution will reduce only through good governance

Air pollution has been plaguing Delhi for 4 decades; the reasons are well known and there is adequate data to pin responsibilities 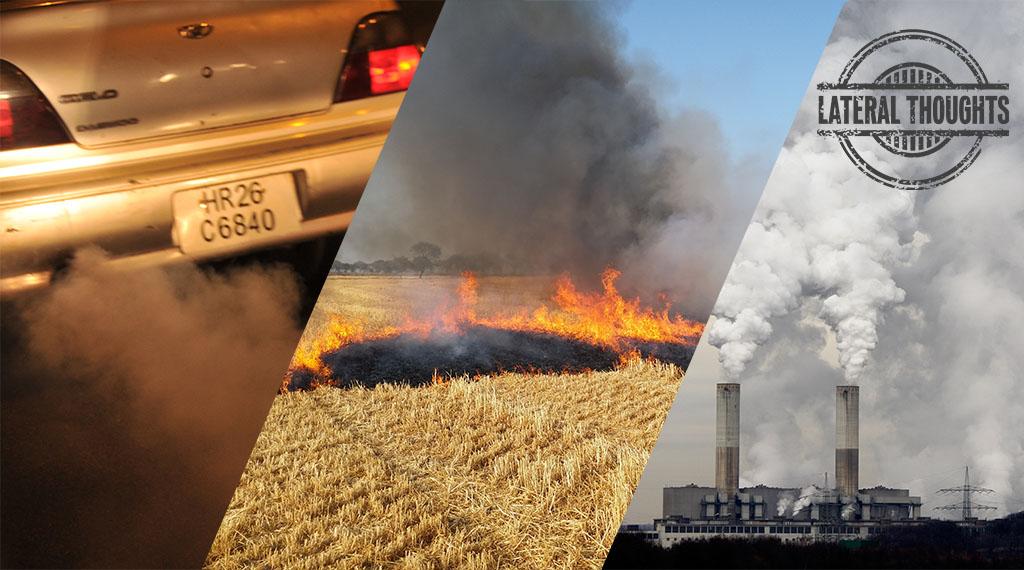 In the early 1990s, Delhi’s air was polluted with diesel fumes from vehicles. I used to travel some 25 kilometres each day across the city to reach Delhi University and could brave the return journey through the ITO area only with a wet hanky tied over the nose. The air used to be acrid due to the diesel fumes from Blueline buses that continuously revved their engines while waiting for commuters.

The air improved when public vehicles in Delhi were mandated to shift to Compressed Natural Gas. This was one of the few times that I found reason to appreciate government action. After all, they were doing little to improve other issues like water supply, electricity or even waste disposal in our urban lives.

But we are now back to a similarly polluted existence. A recent report, State of Global Air 2020, indicates that India is the worst-polluted country in the world. India, with 83.2 microgramme per cubic metre (μg/m3), had the highest population-weighted annual average PM2.5 exposures in 2019. The World Health Organisation Air Quality Guideline puts this value at 10 μg/m3.

India is not alone in this struggle with air pollution. The State of Global Air 2020 report also shows that over 90 per cent of the world’s population experienced annual average PM2.5 concentrations that exceeded WHO standards. The top five polluted countries in the world are India (83.2 μg/m3), Nepal (83.1 μg/m3), Niger (80.1 μg/m3), Qatar (76 μg/m3) and Nigeria (70.4 μg/m3). The 10 countries with the lowest exposures (less than 8 μg/m3) are Australia, Brunei Darussalam, Canada, Estonia, Finland, Iceland, New Zealand, Norway, Sweden, and the United States. These are all rich countries and most probably are implementing the existing laws well.

Implementation is then the key.

Though governments have been trying to solve the problem of air pollution for a long time, the present government recently switched tracks and issued an ordinance that makes pollution an offence under which offenders can be jailed for up to five years or made to pay a penalty of up to Rs 1 crore.

An 18-member Commission for Air Quality Management in National Capital Region and Adjoining Areas would monitor pollution in Delhi, Haryana, Punjab, Uttar Pradesh and Rajasthan to look into stubble burning, vehicular pollution, dust pollution and all other factors that affect air quality.

The commission is the result of an ordinance signed by the President of India and replaces the various pollution monitoring bodies and authorities that exist in the country to regulate air pollution. This includes the Environment Pollution (Prevention and Control) Authority (EPCA), set up in 1998. Among other things, it was responsible for the shift to CNG. With that, ITO ceased to be a gas chamber.

The commission would have to find similar solutions to improve the lives of common people. As of now, we do not know how the commission will ensure reduction of air pollution. We do not know how the ordinance will be implemented by the same government which has failed to use existing laws like the Air (Prevention and Control of Pollution) Act, 1981 and the Environment (Protection) Act, 1986 to control the problem.

The issue of air pollution has been plaguing Delhi for some four decades now and the reasons for the increasing air pollution in Indian cities are well known. Sources of pollution are known and so are the people and authorities who would need to make the changes. There is adequate data to pin responsibilities.

For example. can the commission fine the Delhi government for not ensuring adequate public transport? Or can it fine the farmers for burning stubble in Punjab? And more importantly, as the winters approach and pollution levels increase, would the commission be ready for action in time or are we set for terrible times ahead?

We hope for the best. Though air pollution affects everyone, the poor and the middle class are affected more but this is not a problem that they can resolve.

We need good governance and implementation of the knowledge that has been gathered during recent years. This time round, it might be a good idea to use common sense and take steps that would protect common people. For the commission, this would be as simple as breathing outside the box — air-conditioned offices and cars included.