Run-up to CoP25 Santiago: Are global transport emissions on course?

Transportation accounted for over 24 per cent of global carbon dioxide (CO2) emissions from fuel combustion in 2016, making it the second-largest sectoral emitter after the “electricity and heat production” category.

Of global greenhouse gas emissions as a whole, the sector contributed about 16.5 per cent (excluding land use, land use change and forestry) in 2016. It is estimated that passenger and freight transport accounted for 59 per cent and 41 per cent respectively of transport emissions in 2015, with the share of the latter having grown from 35 per cent in 2000. 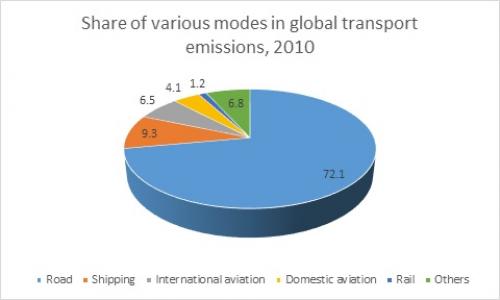 This is because when developing countries become richer, there is a consequent increase not just in the demand for transport but also in the capacity to employ more carbon intensive means to fulfill it; for example, by using private cars rather than public transport.

Thus in 2016, 29 per cent of CO2 emissions from fuel combustion in Kyoto Annex I countries were from transportation, compared to only 17 per cent in Kyoto non-Annex I countries. For India, the figure stood at about 13 per cent.

Over the longer term, it emphasised the importance of urban (re) development. As on all climate strategies centered on consumption reduction, there has been little overall progress on avoidance; between 2000 and 2017, passenger kilometres travelled increased by 74 per cent globally, while freight kilometre-tonnage increased by 68 per cent.

Though passenger kilometres remained stable in the Organisation for Economic Co-operation and Development (OECD) during the same period, they have not fallen as their high per capita consumption would require.

On fuel switching, in 2017, only 3.4 per cent of overall transport energy use consisted of renewables. Biofuels held a share of nearly 95 per cent of all renewable energy used in the transportation sector and the IEA expects the share to be over 90 per cent even in 2023.

In addition to being central to the very limited mitigation strategy in the aviation and shipping sectors, biofuels are also blended into petrol and diesel used in road vehicles. While the European Union and other countries consider biofuels as zero carbon, there are concerns that biofuel production leads to significant indirect emissions through deforestation and land use change; it may also divert land away from food production.

In contrast to this continuing hegemony of biofuels, the share of electricity (renewable or otherwise) in global transportation energy consumption increased only marginally from 0.7 per cent to one per cent between 2000 and 2015. Electrification as a mitigation strategy relies heavily on rapid decarbonisation of the grid.

Indeed, emission reductions by the adoption of electric vehicles may be meagre or even negative in many situations. On electric cars, Norway led the world with a electric car market share of 46 per cent in 2018; the global average is still in the low single digits, a share that is expected to rapidly grow.

Low ranges limit the potential of electrification for trucks and busses, though cities and companies are experimenting with electric and hydrogen vehicles.

On modal shift too, there has been little progress. Globally, the share of road freight (the more inefficient) actually increased from 12 per cent to 22 per cent between 2000 and 2015, while the share of rail freight has stagnated at 10 per cent since the turn of the century. Of surface freight, in 2014, the rail mode share was 70 per cent in Russia and topped 35 per cent in India and China, but fell short of 15% in Brazil, Mexico, and the European Union, and accounted for just 1% in Association of Southeast Asian Nations (ASEAN) countries.

Public transport’s share has stagnated in OECD countries since around 2000, standing at 27 per cent in 2010. While the figure stood at 44 per cent in non-OECD countries, their growing urban population has meant that per capita public transport use has actually declined, indicating carbon intensive development paths akin to those of rich countries.

Walking and cycling remain the principal mode of transport in developing world cities, with the global share of these modes being one third. European cities lead on cycling, with the mode share approaching 26 per cent in Denmark and 27 per cent in the Netherlands.

On the longer term strategy for urban mobility, the IPCC emphasises urban form and (re)development, noting that in low density developments (such as a typical American suburb), cars will almost inevitably dominate; walking and cycling are incumbent on the shorter distances of denser settlements.

Emission mitigation strategies in the transportation sector exemplify historian of technology David Edgerton’s 'Shock of the Old' thesis, which emphasises the continuing importance of seemingly old, outdated and even discarded technologies.

Thus, on urban design, the IPCC’s report notes that ‘Walking cities’ have existed for 8000 years; some are now merely being reclaimed around their walkability. So-called ‘Transit cities’ were built and developed around trams, trolley buses, and train systems since the mid-19th century before being overwhelmed by the ‘Automobile cities’ model of the twentieth century.

On the same lines, it was recently reported that an electric car was set to join London’s ubiquitous black cab fleet. This was not however the first electric car to do so; merely the first in 120 years, as electric cars were an important contender in the early history of the automobile.

In the case of shipping, there is a tiny but growing interest in reviving sailing and earlier this year, a French vessel became the first tall ship to deliver cargo to the Bristol port for decades. While these vessels are dwarfed by modern container ships, even the more conservative IPCC notes the potential of saving upto 30per cent fuel using kites and parafoils to assist engines.

Mitigation action in the transportation sector thus relies, in large part, on the extension of technologies that already exist, rather than on absolute novelties.