One can call it environmental injustice or incentive for pollution, public bus transport is more taxed than private vehicles 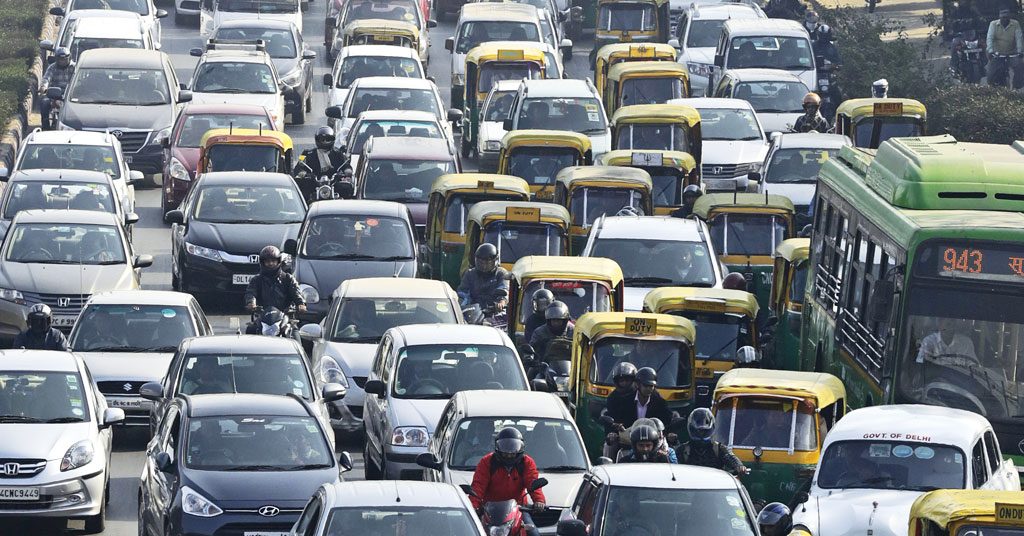 It is shocking how bus transport that carries double the number of passengers the Delhi Metro serves, degenerating when Delhi has to reduce personal vehicle usage to curb pollution and congestion.
During odd-even number formula programme if the existing Delhi Transport Corporation (DTC) fleet and the hired bus fleet are operated at maximum operational efficiency at least 2.5 million additional commuters can be carried. This along with intensified metro system, auto and taxi systems and car pooling can help the city to create good commuting system that is not dependant on polluting cars.

A recent analysis of the performance of DTC buses in the city by the Centre for Science and Environment (CSE) has exposed that with immediate attention passenger carrying capacity of the existing bus fleet can be augmented considerably to meet the expected additional demand during the odd-even system trial run starting from January 1, 2016. Half of the cars in Delhi will go off the road during this trial run that will continue till January 15, 2016.

Public bus service in Delhi is provided by the state owned DTC and the privately run cluster bus services under the aegis of the Delhi Integrated Multimodal Transport Systems (DIMTS). While operational statistics of DTC is available, the details of cluster buses are not. But limited information show that there is enormous scope of improving services of 4,712 DTC buses and 1,500 cluster buses with improved operational efficiency. While DTC buses carry 4.35 million passengers daily, cluster buses carry an additional one to 1.2 million passengers a day.

It is strange that number of passengers using DTC buses remain stagnant despite the growing travel demand in the city. The available bus fleet is grossly underutilised. A large number of scheduled trips are missed daily due to traffic congestion. Add to it the poor maintenance of buses that lead to frequent breakdowns thus further curtailing services. Fixing these problems will result in DTE buses serving additional 0.5 million passengers a day.

CSE’s analysis further shows that during the implementation of odd-even formula from January 1, if operational efficiency of DTC buses along with those of the specifically hired 2000 buses for the trial run and cluster buses is improved, the public bus transport system will serve 2.5 million passengers more daily.

The odd and even formula is an opportunity for Delhi to put in place the plan to improve public transport services to meet the additional commuting demand from halving of personal cars on roads that can be sustained and carried forward even after the programme is over.

How DTC can carry more passengers with same number of buses

Bus fleet is grossly under utilised: DTC has about 4712 buses. But its utilisation during 2014-15 has been only 83.99 per cent against the 85.5 per cent in 2013-14. This is dismal and much worse compared to what other state transport undertakings in different cities have achieved – 95 per cent in Bengaluru and Chandigarh. In any given point of time at least 400 to 500 buses stand in depots unutilised due to poor maintenance or missed trips which is equal to the total bus fleet in smaller cities. This is unacceptable. By addressing this bus service can be augmented significantly.

Buses cannot complete their daily scheduled trips due to congestion and poor maintenance: It is unacceptable that the buses cannot even complete the number of trips that are officially scheduled daily. Only 79.65 per cent of the daily scheduled trips are operated. This has come down from 85.76 per cent in 2011-12. This reduces passenger carrying capacity of the system. Delhi government will have to initiate preventive maintenance immediately to ensure all buses are fully utilized. Also during expert assessment shows that during odd and even number formula fortnight with less congestion on roads and bus lanes the average journey speed of buses will improve by at least 25 per cent.

Buses ply less in a day than their counterparts in other cities:  During 2014-15 DTC buses have done an average of 188 km a day against an average of 270 kilometers that buses of Bengaluru Metropolitan Transport Corporation do. In fact Delhi buses could complete only 78.8 per cent of the scheduled kilometers a day. This reduces the geographical coverage by the buses. This can be significantly augmented during odd-even number formula when congestion will be reduced.

Bus passengers stagnating – arrest this trend immediately: It is very disturbing to note that the total number of passengers carried by the DTC has started to stagnate. While in 2012-13 DTC carried 4.7 million passengers a day, it has actually declined to 4.3 million a day in 2013-14. There was some improvement during 2011 to 2013 but that could not be maintained. But DTC buses are still carrying 1.7 times more passengers than Delhi Metro which serves 2.4 million passengers a day. DTC and cluster buses together are carrying double this number. If this decline is not arrested and reversed Delhi’s public transport will be weakened seriously. Expectedly, it will increase pollution in the city. Each bus trip will be replaced by polluting two-wheeler and car trip. Already, the bus modal share has declined drastically from 60 per cent to 40 per cent.

Substantial augmentation in passengers is possible with full utilisation of current DTC fleet and hired buses during the odd-even trial run: If adequate steps are taken immediately to ensure at least 95 per cent fleet utilisation and eliminate all missed trips then same DTC fleet can carry additional close to 0.5 million commuters. If another 2000 buses are added and utilised fully another 1.9million commuters can be catered to. Thus overall capacity can be created to carry at least 2.4 million additional passengers during this fortnight.

Congested roads in Delhi have slowed down the bus and journey speed for bus commuters. Odd and even number programme can address that: Two cars occupy same road space as one bus but carry just two persons on an average. Whereas one bus carries at least 60 persons -- 30 times the number of passengers in cars.

Bus can displace anywhere between five and 50 other vehicles and allow enormous oil and pollution savings. As a public policy roads will have to be designed to allow priority to buses. Delhi government has started painting the bus lanes. But sanctity of bus lanes will have to be protected with strong enforcement. Otherwise the investment that Delhi will make to fulfill the Supreme Court mandate of 10,000 buses will be wasteful as buses will not meet the objective of improving bus transport service. It is appalling that bus services have been curtailed from neighbourhood of Delhi due to congestion.

Public transport is for public good.

There is barely any tax on personal vehicle usage.  Master Plan of Delhi 2021 has set target of 80 per cent public transport share by 2020. The RITES has estimated that buses can help to meet at least 73 per cent of the target. Buses allow greater flexibility, geographical coverage, cost effectiveness, and space efficiency; they can flexibly and easily meet the needs of changes in demography and land use. It can cover areas with lower travel demand.

Odd and even number formula is an opportunity for Delhi to make the existing public transport services more efficient and reliable. The systems created for this programme should lay the foundation for the future reforms for lasting impact on air quality.

The government should also provide for safe and barrier free walking and cycling in the city. All concerned government agencies should implement traffic calming methods and protective measures for walkers and cyclists to help them access destination safely and conveniently. Simultaneously enforce parking restraints on pavements and penalise illegal parking during this programme. Limit legal parking areas across the city and demarcate them on the ground. Impose high penalty for illegal parking on public space. Charge high parking charges and also price residential parking in public spaces to curb the tendency towards multiple ownership if cars.