The Bill Gates Foundation has invited Indian innovators to send in their ideas that could change the world. But India needs more solutions to its problems than what the foundation can fund. We should cash in on the existing database of ideas with the National Research Development Corporation and National Innovation Foundation

The Bill Gates Foundation has invited Indian innovators to send in their ideas that could change the world. But India needs more solutions to its problems than what the foundation can fund. We should cash in on the existing database of ideas with the National Research Development Corporation and National Innovation Foundation

The public interaction session titled “DBT- Bill Gates Foundation” looked incongruous in the list mentioned in the programme document of the 101st Indian Science Congress. All other sessions were organised singly by government agencies like the Indian Space Research Organisation (ISRO) and Indian Council of Medical Research (ICMR) or ministries like Union Ministry of Earth Sciences (MOES).

At the session, two representatives of Gates Foundation and one from Department of Biotechnology (DBT), under the Union ministry of science and technology, gave information about the foundation’s “Grand Challenges” project. Basically, the Gates Foundation invites innovators to send in their ideas that could change the world. Ideas which meet the vision of philanthropy would be provided an initial grant of $100,000. Additional funds to the tune of up to $1 million would be provided if the initial results prove fruitful. The patent for the idea would belong to the innovator and benefits would accrue to him or her.

Under the collaboration, DBT and the Gates Foundation have agreed to invest up to US $25 million each over five years in innovations in vaccines, drugs, agricultural products, and interventions related to malnutrition, family and child health.

Shailja Vaidya Gupta, director at DBT, said such collaborations were needed to promote innovations. Gupta justified the collaboration, saying it was to ensure that India has access to the fruits of the research. For example, access to patented medicines at affordable prices.

DBT entered the partnership with Gates Foundation in March 2013 and DBT would co-fund the ideas. She revealed that DBT would ensure that the Indian taxpayers' money is used on projects that benefit India. In October 2013, improving the toilet was identified as the first challenge for India. The first project is likely to be sanctioned by March.

The project sounds similar to one being implemented by Department of Science and Industrial Research (DSIR) under the Union Ministry of Science and Technology. Known earlier as TePP, under the 12th plan, the scheme has been renamed as PRISM (Promoting Innovation in Individuals, Start-ups and MSMEs). But DSIR pays less—up to Rs 2 lakh in the first stage and up to 20 lakh in the second stage. Also, DSIR pays only 90 per cent of the cost and the researcher has to find the rest through bank loans. “This is the first scheme under which government provides funds to an individual,” says S K Khattar, scientist with DSIR. So far, 600 such projects have been sanctioned out of which 400 have been completed and 100 have been commercialised.

From an innovator's mouth

Trebhuwan Singh Raman, an innovator from Jaipur has availed funds from DSIR. Raman used to work with a private company involved in making surgical equipments. He left his work around 10 years ago to devote himself fully to innovations. His work includes medical equipment such as “intralock intravenous cannula”, which does not allow the blood to leak out when the drip is removed. The product has been tested by the All India Institute of Medical Sciences (AIIMS) and Raman has approached National Research Development Corporation (NRDC) for commercialising the product. He has eight patents and is in the process of applying for two more. Unfortunately, none of his products are in the market. Being medical devices, these need to go through stringent clinical trials, says Raman. 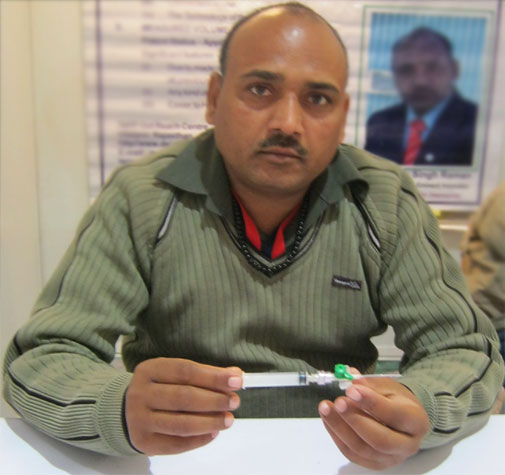 As a true innovator, Raman attended the DBT-Bill Gates Foundation session but left dissatisfied. “Any idea can change the world and just because it does not meet their vision, it does not mean that the idea is bad,” he said. They will choose the best idea out of the thousands that are sent to them. What about the others? How will they ensure the security of the other ideas, he asks. The Gates Foundation representatives failed to answer his concerns.

Collaboration with a global philanthropy would indeed provide innovators with much needed funds. Sufficient funds would also take care of commercialisation. The Gates Foundation is capable of providing these funds. It would have been good if instead of being a co-funder with the foundation, the government puts in some money to help launch the great many ideas that are with NRDC and National Innovation Foundation (NIF). India has many problems that need solutions. Gates Foundation would fund only a couple of these.