Child weavers toil till the day is done

Trapped and exploited by dollar-hungry exporters, a child carpet-weaver's work ends when the sun goes down. Only then is he free to have his first and perhaps only meal of the day 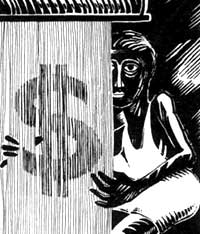 IT WAS a typical Indian village, with low, thatched roofs, mud walls and floor. Yet, as I went around I was told, "This is Germany, this is Canada and this, America". Strange names for huts in a village? Not if the village is UP's Varanasi district, also known as Dollarland because it is the core area of the hand-knotted carpet industry. Each cluster of huts is called by the name of the country to which its carpets are exported. With the prospect of fat profits, nobody cares that the carpets are hand-knotted by children under 12 years of age. They alone have fingers thin and nimble enough to tie 400 knots and more per square inch. The weavers know that the greater the number of knots per square inch, the more dollars the carpet will fetch.

I entered a cluster late one evening with a friend and came under the suspicious eyes of lungi-clad men. "We want to buy carpets," I told them. Roll upon roll of exquisite colour and design unrolled before me. "Could I see them being woven?" I asked. Immediately, their hackles rose and their chief asked, "Are you a journalist?" I had been coached to reply that I was an exporter, but something made me blurt the truth. "No, a writer. Books, you know. I like to see things for myself." He pondered awhile, and then said with a casual wave of his hand, "Writer. You mean for yourself! Come."

I was admitted to the "sanctum sanctorum" -- a dark, dank shed in which vertical looms stood six feet to nine feet apart on the mud floor. Each loom was fitted with a double length of razor-sharp twine, stretched so close together my little finger could not go through. Behind each loom, a figure crouched, intent upon its work of weaving coloured wool through the twine, twisting it and then tying a knot. The wool thread is then snipped with a scythe-like knife. The light from the windows lit up only the loom and though I peered behind them into the dark, I could not make out whether the creaturewas a man, woman or child.

Then, suddenly, an emergency. Blood dripped from a finger cut by the knife. My guide swore loudly, "Don't soil the carpet." With a shock I realised he was talking to a child.

"Does that happen often?" I asked casually.

"No," the reply came swiftly. "Usually the bastards cut it on the twine. Then, it does not bleed so and we cauterize it with burnt wool. Very effective."

"I guess the fingers lose their nimbleness if that happens often."

"Sure," was the matter-of-fact reply.

"And then they must become unfit for work," I commented, trying to match his nonchalance.

"Have tea," he said, changing the subject. "Come and have tea." With that I was ushered firmly outside, where I noticed many children, some with glum and vacant faces, hanging about.

"Are they yours?" I asked my hosts.

"Certainly not," they said, properly affronted, "Ours are in school. These are lazy bastards, fit for nothing."

"Where are the parents?"

"Who knows? Whenever there is a drought, they dump them on us and disappear."

"Who feeds them then?"

"We, of course, who else? And the amount of usna and maand (parboiled rice gruel) they eat, for the piffling work they do!"

I asked the chief if I could talk to the children and even though he had no objection, the children scurried away when I approached them. The my friend produced the photographs he had taken. "Your photos, " he called out and the children stopped in mid-flight. My friend ran his eye over them, selected a photo to fit a mud-encrusted, ragged, eight-year-old face and held it out to him. He drew near, gazing enraptured at the photo. Then he held it gingerly in his hand and broke into a dance. "My photo! Ah, my photo," he trilled, "Look at my photo!"

The transformation was swift and he was once again a playful elf, a carefree cherub. Later, my friend told me he had been permitted to take photographs outside as long as the looms were not in them.

The cherub sidled upto me and whispered in my ear, "Come, I'll show you the carpet I'm weaving." He did so, twisting his body and using his calloused fingers to display weave and knot. Suddenly I became aware that each of the figures at the loom was a child weaver. Equally clear was the reason why my friend had insisted on my going there at dusk. He knew it was the best way to show me that the weaving would stop only when daylight ended. Only then would the children emerge to eat their only meal of the day. And that would be when I would see them clearly as little people banished from the sunlight.

Mridula Garg is a short-story writer who writes frequently on environmental issues.