This is a real life story of the world’s three wicked problems, one opportunity and a new way to confront global challenges

This is a real life story of the world’s three wicked problems, one opportunity and a new way to confront global challenges.

Climate change, we know enough to say emphatically, is a wicked problem. It was in 1992 that the world started its formal journey to cut carbon dioxide (CO2) emissions with the signing of the UN framework convention on climate change in Rio at the Earth Summit. More than 20 years later, not much has changed. The weather is becoming more unpredictable, more extreme and we are all at risk. Worse, the world is failing to negotiate how it will share economic growth that is intricately linked to CO2 emissions.

Air pollution in our cities is another wicked problem. It was in the 1990s that Delhi started its journey to clean its air. It changed its fuel to compressed natural gas, which emits much less emissions than conventional fuels like diesel. It used cleaner fuel to run its public transport vehicles. But even as this happened, the number of private vehicles surged. Worse, the use of diesel increased. As a result, pollution is back with a vengeance.

After years of the world becoming “modern” as many as 2.67 billion people—over 40 per cent of the world’s people—still burn biomass in their inefficient and dirty cook stoves. This is another wicked problem. Efforts to provide clean energy for cooking began in the early 1980s, when the world was worried, not about the pollution from stoves, but about the prospect of losing forests because of firewood collection. This did not happen in a country like India. Even today rural and poor Indians, constituting 75 per cent of the population, use inefficient stoves and inhale toxins that are now understood to be the world’s number one killer. 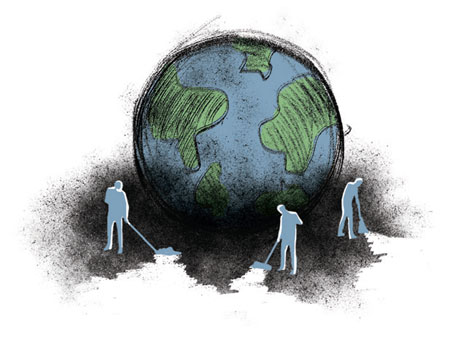 So, how do these three wicked problems come together? The answer lies in the dark core of the particulate matter called black carbon, which is emitted by diesel vehicles, cook stoves and brick kilns. Till recently, particulate matter was understood to be a local pollutant. Today we know that a fraction of it comprises black carbon, which can absorb heat and warm up the surrounding atmosphere. It is, therefore, not just a local pollutant, it has global warming impacts. The extent of its warming potential is still being debated, but the Intergovernmental Panel on Climate Change (IPCC) has doubled its estimate of warming from black carbon aerosols from its previous report. So, the opportunity is one of co-benefit: reduce emissions from diesel vehicles and cook stoves, and get the additional advantage of combating climate change.

How much and how? Anil Agarwal Dialogue, 2015—an annual event organised by the Centre for Science and Environment in the memory of its founder-director and environmentalist— discussed this earlier in March. The key issue that emerged is that the world needs to act differently; it must recognise that global action will be local.

In other words, the world must recognise that black carbon is a local pollutant and that action must be directed to address its local health concern. The co-benefit agenda is important but incidental. In addition, it must be clear that black carbon must not distract the world from the agenda to cut CO2. We know that CO2 has a long life in the atmosphere—once emitted it stays for roughly 100 years and, therefore, determines the temperature change in the long term. Black carbon has a short life of less than eight days, so any effort to cut it brings immediate benefits. More importantly, black carbon cannot become a proxy for real action to cut CO2. Nor can it be used to shift the blame and burden to the developing world.

It is also clear that action on black carbon must differentiate between the luxury emissions from diesel vehicles and the survival emissions from cook stoves of the poor. Not only because politics demands this, but also because science preaches this. The fact is that diesel emissions have a higher share of light-absorbing black carbon that has a definite warming impact. Biomass-based cook stoves have a higher proportion of organic carbon that scatters sunlight and cools the atmosphere.

While luxury emissions have to be targeted aggressively for both local and global benefits, survival emissions of the poor need supportive and enabling action. And even if this action requires countries to provide LPG, the fossil fuel energy for cooking, then they should do so. The poor’s energy needs cannot be held to ransom, when the world’s rich are addicted to fossil fuel and are the cause of catastrophic changes in our climate. What this does suggest is that the world can do things differently. Today, it is the world’s poor who are not yet in the fossil trap. They can drive, cook or build homes in the cleanest and greenest manner.

This will, however, require global leaders to “do leadership” differently. Not what we see today: national concerns masked by a global front.

Bounding the role of black carbon in the climate system: A scientific assessment