Best way to remove carbon: Sequestering it in its natural sinks 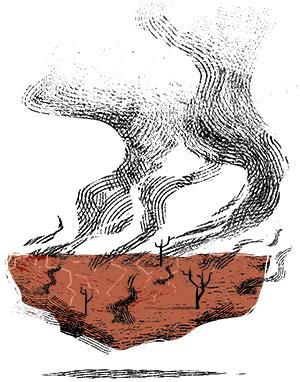 Desertification is an example of a positive feedback loop, just as the melting of the Arctic ice cap, thawing of the Siberian permafrost, and the large-scale release of methane from methane hydrate lying on the sea and ocean floors.

Let me explain this, but first a disclaimer: this is an oversimplified version of an extremely complex process.

Soil is one of the largest repositories of carbon on our planet. In fact, there is three times more carbon in the soil than in the atmosphere. Carbon loss from soil has been happening since the beginning of settled agriculture, but this is now being exacerbated by desertification.

The emissions of soil carbon to the atmosphere is contributing to global warming. Latest data indicates that land degradation is responsible for annual global emissions of 3.6-4.4 billion tonnes of carbon dioxide (CO2) or 10 to 12 per cent of the total emissions.

The climate crisis, on the other hand, is further speeding up desertification by increasing the frequency and intensity of droughts, floods and forest fires, and also by the changing the patterns of temperature, solar radiations and wind. Climate crisis and desertification, thus, are reinforcing each other.

The Intergovernmental Panel on Climate Change’s (IPCC) Special Report on Global Warming of 1.5°C makes it clear that we cannot meet the target of 1.5°C without large-scale “carbon removal” from the atmosphere.

The best way to remove carbon is by sequestering it in its natural sinks — forests, grasslands and soil. Meeting the 1.5°C target, therefore, requires rapid enhancement in the capacity of natural carbon sinks to suck atmospheric carbon. This is also required to combat desertification.

All these will help enhance biomass production and organic carbon content in the soil. Combating desertification and climate change, thus, have the same solutions — enhance natural sinks. So, how do we get these solutions implemented at the scale and pace required to meet the 1.5°C target?

In 2007, REDD+ (Reducing Emissions from Deforestation and Forest Degradation) was formalised to incentivise forest conservation in tropical developing countries by providing them funds and allowing them to sell carbon credits to the developed countries.

So far, more than 300 REDD+ initiatives have taken off across the world. A decade later, however, there is no convincing evidence to establish its contribution to halting or reversing deforestation trends. The carbon market has collapsed.

The developed countries’ funding commitments for REDD+ have also been much lower than expected. So, the REDD+ mechanism has not delivered, but the lessons learnt can be used to design a new global mechanism to enhance natural carbon sinks. Let’s call this new global mechanism Sink Mechanism.

The first lesson is that any land and forest-related mechanism will work only if it is owned by communities. Studies show that indigenous people and local communities are capable of achieving excellent forest conservation outcomes by investing only a fraction of the total money spent on conservation by all agencies.

The Sink Mechanism will work if millions of forest dwellers and farmers work to reverse land and forest degradation, and enhance carbon stock in forests and lands.

Second, it has to be a carbon sequestration-plus approach. In other words, improved sustainable forest and farm management practices have to be the basis of this mechanism. This will lead to social, economic and ecological benefits. Scaling of carbon sequestration would be one of its co-benefits.

Third, land and forest-based mechanisms cannot be sustained on carbon credits. These cannot be left to the mercy of the markets, and a non-market approach is needed to finance them.

We, therefore, need to design a non-market mechanism where funds are mobilised to build the capacity of communities and local governments. Based on their performance, they can be rewarded for developing their own ‘sink’ and for achieving emissions reduction and carbon stock enhancement.

Lastly, any global mechanism cannot depend solely on international funding. REDD+ experience shows that once foreign funding ceases, projects become unsustainable. So, funds for the Sink Mechanism have to be a combination of domestic and international resources to build domestic ownership.

Together, the Sink Mechanism that addresses both forests and farmlands can mitigate more than one-third of the climate crisis.

The good news is that countries have recognised the importance of sinks. Many of them have expressed interest in enhancing carbon sinks through their nationally determined contributions (NDCs) under the Paris Agreement.

An analysis of the submitted NDCs reveals that more than 100 countries have focused on or considered the land use, land use change and forestry (LULUCF) sector under their climate mitigation strategies. What we now need is to bring all the countries together and agree on the Sink Mechanism as a true collaborative mechanism to fight the climate crisis.