Biden’s climate summit: All eyes will be on the US, come April 22

United States President Joe Biden has invited 40 world leaders to a virtual Leaders Summit April 22 and 23, 2021— a much-awaited event that aims “to galvanise efforts by the major economies to tackle the climate crisis”.

The US sent Special Presidential Envoy for Climate John Kerry on a diplomatic tour to countries like India and China in support of their effort to pressure other large economies to raise ambition ahead of the summit.

India appeared to put up a steely front so as not to buckle under pressure to set a net zero emissions target as countries like China, Japan and the European Union have (and the US reportedly plans to, as well).

Kerry’s visit to China did not produce results that the climate community can consider significant in any way but was more of an attempt to thaw relations with it and seek cooperation on jointly addressing the climate crisis — by word of mouth at least. Ahead of the summit, President Xi Jinping announced his acceptance of Biden’s invitation to join the event.

Russian President Vladimir Putin also announced his intent to address the summit, keeping his agenda for the event vague.

The European Union, meanwhile, reached a tentative deal on the morning of April 21, to make its pledge of being ‘climate neutral by 2050’ a legal commitment.

If enshrined in law, the EU would aspire to the same target listed in their updated nationally determined contribution (NDC) to the United Nations Framework Convention for Climate Change in 2020, of cutting greenhouse gas emissions by at least 55 per cent from 1990 levels through 2030.

This is marginally higher than the 40 per cent target listed in their previous NDC. An important distinction clarified by the EU has been that their goal now translates into a “gross” reduction of 52.8 per cent without carbon removals from natural sinks like agriculture and forestry — a blurry detail for which they had come under fire earlier and rightly so.

The United Kingdom announced a higher target on April 20, of cutting carbon emissions by 78 per cent in 2035, compared with 1990 levels — a target that will also be enshrined in law.

The world will be watching the US, however. The summit is the occasion on which the US will unveil its 2030 emissions target as its new NDC under the 2015 Paris Agreement. Its earlier and only NDC submitted by Barack Obama’s administration pledged to cut emissions by 26–28 per cent below 2005 levels by 2025.

An open letter signed by more than 400 large corporations this month called on Biden to adopt a target of cutting greenhouse gas (GHG) emissions by at least 50 per cent below 2005 levels by 2030.

This seems to be a figure many entities have got behind, including the World Resources Institute, the Union of Concerned Scientists, the Environmental Defense Fund and the Natural Resources Defense Council.

This is also in line with what White House officials have indicated — that the Biden administration will pledge to reduce US GHG emissions by at least half by the end of the decade, media outlet Bloomberg reports. That would amount to a 41 per cent cut when compared to the baseline of 1990, according to calculations by the Rhodium Group. 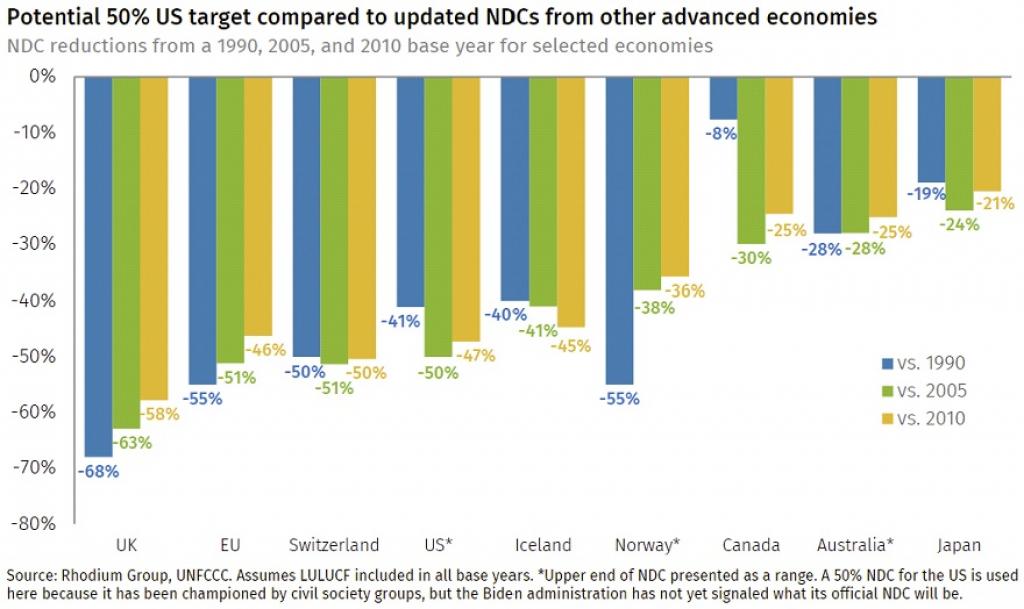 Even this is likely to be met with disdain from Republicans on the pretext of high energy costs, loss of jobs and a threat to the US’ competitiveness. But it is the very least that the US should commit to given that it has wasted the past four years in climate lethargy.

According to the Climate Action Tracker, the US needs to cut its emissions by 57 per cent to 63 per cent below 2005 levels by 2030 to do its share to limit the rise of global temperatures to 1.5 degrees Celsius.

The US Climate Action Network, an environmental advocacy organisation, has called for a 70 per cent reduction of domestic emissions (5 billion metric tonnes) below 2005 levels by 2030.

It has also called for a further “fair share” commitment of financial and technical support to developing countries to enable them to reduce their emissions (by 9 billion metric tonnes) faster than they otherwise could — equating to a total reduction of 195 per cent below its 2005 emissions levels.

The US is the largest historical emitter of carbon dioxide emissions, accounting for a quarter of the world’s emissions since 1751. Its emissions have declined recently, owing to the steamrolling of coal by the country’s shale gas boom — shale gas being less carbon intensive than coal, but still emitting methane, a potent GHG. Fossil fuels still comprise over 80 per cent of its energy mix and it is currently the world’s largest oil and gas producer.

An ambitious NDC in line with the US’ historical responsibility and current emissions, of which it is the second largest emitter, is key. It is one among many moves that could help rebuild trust among skeptics, who have seen the US water down climate treaties since the 1990s and continue to build a carbon-intensive economy.