After CoP 15 in Copenhagen in 2009 when developing countries first began to make emission mitigation pledges in significant numbers, the need was felt to assess the impact of these pledges on emissions in 2020 and the gap between these projections and where the world needed to be to limit warming to 2 °C or 1.5 °C.

Thus, was born the United Nations Environment Programme’s (UNEP) Emissions Gap Report, published in 2010 with the aim of enhancing ambition at Cancun. The Report became an annual feature of the climate calendar and its tenth edition was released on November 26, 2019.

The headline finding that current policies were on track to increase global mean temperature by 3.2°C by the end of the century remains unchanged from last year’s edition. 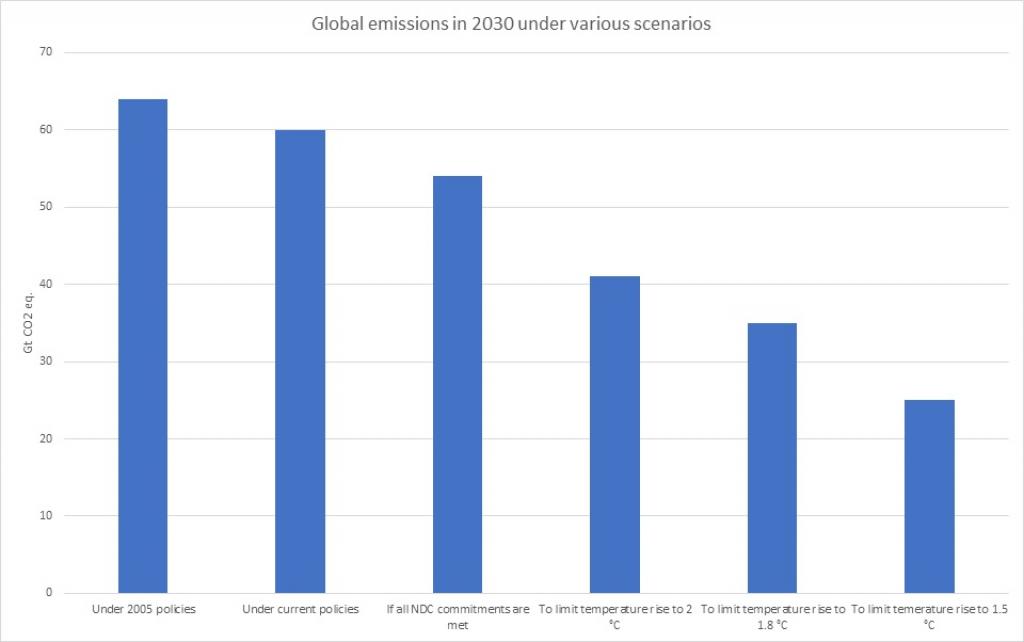 In a change from previous editions, the report has included a 1.8°C scenario to allow “for a more nuanced interpretation and discussion of the implication of the Paris Agreement’s temperature targets for near-term emissions”.

While 1.8°C scenarios have long been modeled (most prominently as the International Energy Agency’s Sustainable Development Scenario), it remains to be seen whether its rising prominence in the discourse will encourage countries to raise ambition from 2°C degrees or whether the net impact of a prominent but less ambitious target will be to discourage full compatibility with 1.5°C scenarios.

In another change from the previous edition, the report also presents estimates of 2030 emissions under a 2005 policies scenario — that is, if all countries had continued with policies frozen in that year. This shows clearly how little progress the world has made on climate policy in the past decade and a half, as 2030 emissions under current policies are projected to be barely 6.25 per cent lower than under 2005 policies.

In terms of annual emissions, while a brief stabilisation of global greenhouse gas (GHG) emissions between 2014 and 2016 had given rise to some optimism, the 2018 data presented in this year’s report confirms last year’s finding that this was a temporary blip; global emissions have since risen to record levels.

Indeed, noting that 2020 emissions are likely to be exactly where projection of 2005 policies had put them ten years ago, UNEP’s Lessons from a decade of emissions gap assessments report released in September for the Secretary General’s Climate Action Summit called the period of existence of the Emissions Gap Report a “lost decade”.

This lost decade has strong policy implications. Had serious climate action begun in 2010, global emissions would need to be cut at the annual rate of 0.7 per cent and 3.3 per cent respectively to be on track to limit warming to 2°C and 1.5°C.

The scale of future action required becomes even more challenging for every year that the world delays meaningful climate action. These numbers, more than any others in the report must push policy makers to act with a sense of urgency.

On the new mantra of net zero carbon emissions, the report notes 65 countries and major subnational economies, such as the region of California and major cities worldwide, have committed to net zero emissions by 2050.

However, few have submitted plans to the UNFCCC committing to a timeline, none of whom was a member of the G20 which accounts for 78 per cent of global emissions. While five G20 members (the EU and four of its individual members) have committed to long-term zero emission targets (not all with a target date), the remaining G20 members are yet to commit to achieving zero emissions.

The report provides a detailed analysis of the performance of the G20 countries. While the group as a whole was likely to meet its Paris commitments, seven members were unlikely to do so.

The most significant change from last year’s edition was the case of the European Union (EU), which is now projected to meet its target. The report attributes this change to reforms in the EU Emission Trading System and legislation that ensures that accounted LULUCF emissions do not result in a decrease of the EU’s sink.

Together, these will enable the EU to achieve its target of 40 per cent emission reduction in 2030 over 1990 levels. More recent developments such as increasing the share of renewables in the energy mix and improving energy efficiency, if properly implemented, would lead to emissions reductions of at least 45 per cent. 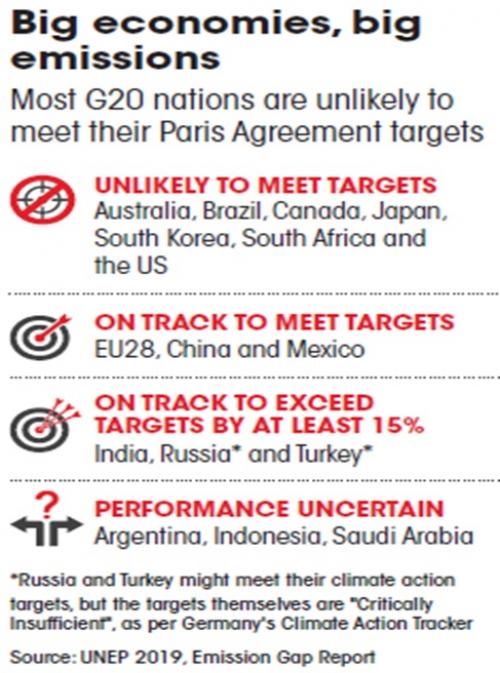 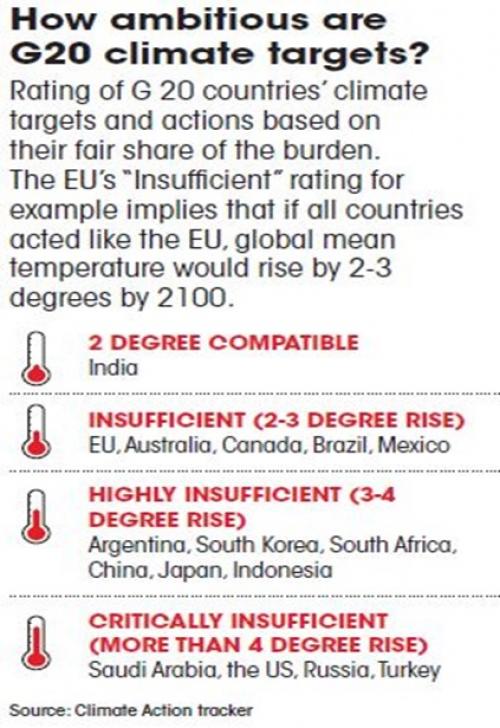 India, Russia and Turkey are projected to overachieve on their Paris commitments by at least 15 per cent, a figure revised upwards from the 10 per cent mentioned in last year’s report. This finding, like any other comparison of countries’ target attainment, must be seen in the context of how ambitious the targets were to begin with.

Of the G20, India is the only country whose targets are rated as compatible with limiting warming to 2°C, while Turkey and Russia’s targets are rated the worst possible “Critically Insufficient”, or one that will lead to warming of more than 4 °C if all countries set similarly unambitious targets (see How Ambitious are G20 climate targets).

The Report nevertheless notes that even India (along with Russia and Turkey) has room to enhance its ambition as the projected overachievement implies a “weak target”, an observation it surprisingly does not explicitly make of other countries’ highly unambitious targets.

More generally on India, the report notes that in 2018, renewables deployment exceeded conventional fuels and says that India’s uptake of fossil fuel infrastructure has been stymied by a financial crisis that has led many coal power projects to be deemed as non-performing or stressed assets.

It further notes that new pollution standards under the National Clean Air Programme provides an additional motivation to shut down old coal plants.

The Kisan Urja Suraksha evam Utthaan Mahabhiyan (KUSUM) scheme which aims to provide solar energy in rural areas with the target to install 26 GW of solar agricultural pumps by 2022 and the publication of the India Cooling Action Plan which seeks to provide cooling services while reducing its substantial climate impact were other positive developments this year.

The report also notes that India has also begun deliberating policies to electrify transport. The second phase of the Faster Adoption and Manufacturing of (Hybrid &) Electric Vehicles (FAME), which aims to support the uptake of electric vehicles ranging from motorcycles to busses and is projected to make for a cumulative emission saving of 7.2 MtCO2e was launched this year.

India is also mulling on a target to ban sales of all fossil fuel-powered vehicles in the next decade, besides aiming to electrify all its broad-gauge railway routes by 2021–2022.

Despite noting these positive developments, the report makes the crucial point that renewables development has been let down by unclear and inconsistent norms on taxation and import duty, putting India on track to miss its interim target of installing 175 GW of non-hydro renewables by 2022.

The report also makes it convenient to visualise how the inequitability of access to the carbon space will evolve in the future and acquire new dimensions. An examination of the projected per capita GHG emissions in 2030 is sobering.

Injustice and imbalance are likely to persist even in a scenario where all countries meet their Paris commitments. Russia emerges as the top per capita polluter among large countries, with the figure on track to double between 2010 and 2030 to reach 18.5 tonnes of CO2 equivalent (tCO2e) per person, even if it meets its Paris commitments.

The US might be able to reduce its per capita emissions to 11.5 tCO2e by 2030; still amongst the highest in the world. Even this will depend critically on whether the country meets its commitments under the Paris Agreement from which it has withdrawn.

While China’s per capita emissions are slated to rise to 10.3 tCO2e, India’s will only climb to 3.7 tCO2e, and thus remain far lower than other developing economies such as Brazil and South Africa. 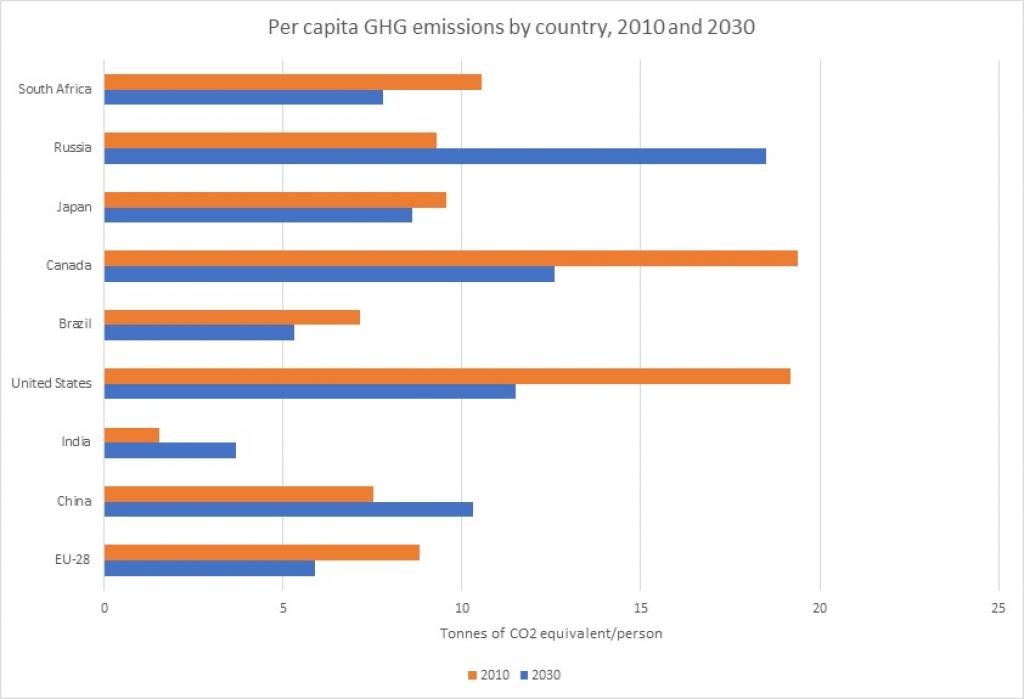 The analysis assumes that all countries meet their Paris commitments

The Emissions Gap Reports make recommendations on broad thematic areas which change every year. Last year’s theme was fiscal reforms, innovation and markets, and the role of non-state actors such as cities, provinces and businesses.

On the latter, the Lessons from a decade of emissions gap assessments report however emphasised that the impact, while potentially significant, is currently limited and poorly documented; this may put something of a dampener on the recent enthusiasm in the global discourse on non-state actors.

This year’s report emphasises the energy and transport sector, arguing that renewables and energy efficiency, together with electrification of end uses are key to driving down energy-related CO2 emissions.

It further emphasises “demand-side material efficiency” which requires reducing the use of material required to build (say) cars and houses (so called light-weighting), substitution of carbon intensive materials with low carbon material, improvements in the yield of material production, and more intensive use implying longer life, component reuse, remanufacturing and repair.

Nevertheless, the high quality of data analysis, together with the fact that despite the standard disclaimer that the report represents the views of its authors and not of the UNEP, it is still published under the UNEP seal with the symbolic weight of the entire UN system behind it, gives it a high degree of legitimacy.

This should hopefully lead world leaders to course correct as they congregate for the CoP 25 in Madrid between December 2 and 13, 2019, and as they announce their next round of commitments under the Paris Agreement which are due next year.