How should we react to the likely outcome of the Paris climate conference? 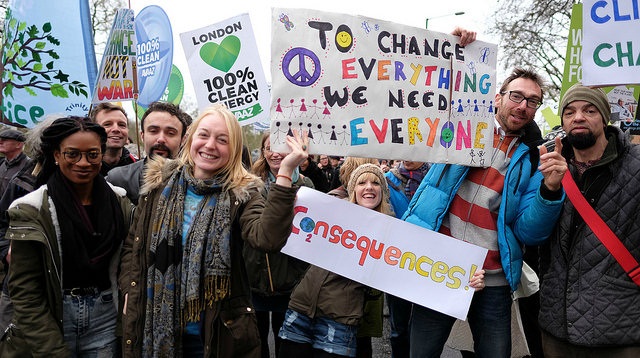 How should we react to the likely outcome of the Paris climate conference? Unless something dramatic happens overnight it is very likely that the news media on Sunday morning will hail the Paris agreement as a breakthrough and a big victory for those pushing for strong action on carbon emissions.

Yet on Friday we heard from some of the best-informed scientists that the outcome will be a catastrophe.

So who is right? They both are. It depends on the question being asked.

One question is: “What could we reasonably hope would be achieved at the Paris conference?” In my assessment (that is, compared to my expectations about what was possible based on experience and the signs coming into the conference), the likely agreement is about as good as could be hoped for.

It finally acknowledges that warming should be kept below 1.5°C, there will be five-yearly reviews (with exceptions), climate financing has been ramped up, the crippling formal division between rich and poor countries has been broken down and various other provisions have been resolved towards the good end of expectations.

It’s become clear that what is being achieved in the negotiating rooms is being trumped by what is happening outside. In the last fortnight I have witnessed the quite amazing shift among investors and “non-state actors” that signals a sea-change in climate action that now seems unstoppable. (This comes from someone with a well-founded reputation as a doomsayer).

But there is another question that can be asked: “Will the Paris Agreement be based firmly on the science and commit the parties to actions that will limit global warming to less than 2°C and preferably 1.5°C?” The answer to that is undoubtedly no.

The country commitments brought to Paris are expected to limit warming to perhaps 3°C, which will be catastrophic if it occurs. Limiting warming to 1.5°C now seems impossible. As Steffen Kallbekken, Research Director at the Centre for International Climate and Energy Policy, put it at a conference briefing: by the time the current pledges enter into force in 2020, we will probably have exhausted the entire carbon budget for the 1.5°C degrees target.

So the Paris agreement arguably locks us into a warming trajectory that will be disastrous.

How are we to find our way through these conflicting stories?

Consider the statement on Friday by Kevin Anderson. He made the heart-stopping claim that the deal as it stands is worse than the Copenhagen Accord. The commitment to science has been stripped out in Paris, he said, and emissions from shipping and aviation, huge and growing sources of emissions, have now been “exempted”.

When the media, and everyone else, declared that Copenhagen was a disaster the signal to the world, and especially to business, was that nations cannot agree and not much is going to happen.

Yet when the media, and almost everyone else, reports that Paris was a huge success the signal to the world, and especially business, is that nations have agreed on a firm direction, that the world is rapidly changing and that you are crazy if you do not get on board.

There is good reason to feel, like me, torn in two directions. For those who understand the situation, the polarity sets up a powerful tension. If it’s uncomfortable to be suspended between the poles, it’s dangerous to go all the way to one or the other.

If we allow ourselves to be drawn over to the everything-will-be-OK pole, we are ignoring the science and indulging in wishful thinking.

If we allow ourselves to be drawn over to the catastrophe pole, which is quite consistent with the science, then we become unable to recognise and encourage the positive steps that are being made. Three degrees is a big improvement on four, and 2.5°C is even better, even if it remains bad. But what matters most is momentum.

After writing the “good news” stories I mentioned, hearing the scientists again was like a bucket of cold water. But we have to live between the poles, because it is the tension that allows us to believe that the great step forward of Paris, while still a long way short of what is needed, could set the world on a path where much more becomes possible.